Thanks for the feedback. The kola and hot milk spawning has some bugs, which I  could not fix during the game jam due to the time constraints. Maybe I will do a bug fix update later. 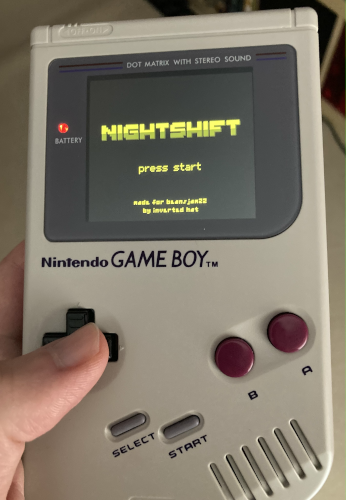 Thanks a lot. I'm very flattered. The link to your RetroAchievements page is now part of the game description.

Happy to hear you enjoyed playing my game. I wasn‘t sure which button to use for RESTART and went with start button because select is already used for the music selection on the title screen.

I‘m happy to hear you like the overhauled wall jump/slide. A little tutorial on these mechanics for GBStudio Central is in the works.

Thanks so much! This means a lot to me

I've noticed the slowdown too. I'm not sure if I will be able to fix it.

To solve the momentum after death issue I used the player fields plugin by pau-tomas to set the player's x and y velocity to zero.

I'm happy you enjoyed playing my game. I'm going to send you a screenshot of the GBStudio platformer settings I used on Twitter. The basic idea is to set the minimum and walk velocity to the same value and a high deceleration. Because I'm generally bad at playing platformers I don't like it when the player builds up speed and thus needs some time to stop after you've released the button. It adds an extra layer of difficulty for me.
The player sprite is 8x8 pixels. I made it so small to have enough space to work with for my single screen levels without scrolling.
You can listen to my original song in the game. Just press Select on the title screen to choose between Tronimal's remix and my original  song.

I think you will be fine. Tronimal (the host of the jam) already played your game (and all the other games) on Twitch and seemed to have enjoyed it. So you don't have to be worried about getting removed. I think the NSFW rule was more about naughty stuff and not about exploring darker themes.

Thanks for sharing your thoughts and experiences during the jam. This was an interesting read and it's always nice to learn about different game development approaches.

I love the art style. The animations are cute and the color palette feels very retro. The story/setting is very creative and fits the jam's theme well. I also wasn't able to figure out how to beat the boss. I hope you continue to work on this as I would love to see further adventures of the cute little milk carton.

Congratulations on making your first game. This is something you can be proud of. I can clearly see an hear the Pokémon inspiration in your art and music. The dialogs are entertaining. I did a second run just to learn the characters responses to the „wrong“ answers, like not rewinding the VHS and wrong homework advices.

Congrats on developing your first (Game Boy) game. The graphics are really nice. I love the jump animation and your colour palette. Your music really gave me a sense of urgency which fits the speed running theme.

It took me a while to get used to the controls due to the momentum of the player. The portal idea is nice although I didn't understand that I have to press A to enter them immediately. Sadly I wasn't able to finish your game because on leaving one portal in the second level (see screenshot) I always directly get  throw into the spikes. 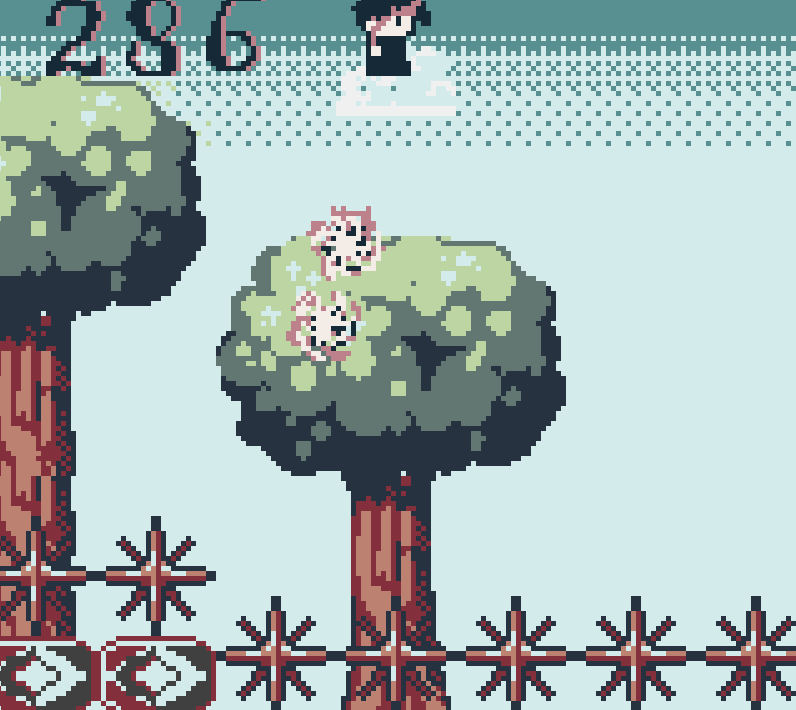 It's nice to see my game is being played on actual hardware. As I haven't seen the Kevin Costner movie I'm quite sure it's not an adaptation, at least not a deliberate one :) Restart button is up high on the improvements list for my planned update.

I'm really bad at shmups but always enjoy playing them, which kind of sums up my experience playing your game (my high score is about 350). The circular movement is a quite unique game mechanic, I haven't really seen this before. Great music and fitting sound effects.

Really cool to see an entry made with a dev kit I wasn't aware of.

That's already a pretty good time. Mine is around 2 minutes. A retry button will be added once the voting is done and updates are possible again.

Nice to hear you had fun playing my entry :) The wall jumps are done using GBStudio triggers and a bounce event. They are directly in front of the walls so technically you can already do a wall jump when you're actually 8 pixels away from the wall. Don't tell anybody ;)

I'm happy you enjoyed playing my game. There were times (especially late in the evening) during the jam were I would have liked to borrow some of his energy as well. So you are a wall jump veteran :)

With wall jumps I feel it's either you love or hate them^^ But there are some really difficult ones in my game. I'm going to do a little update once the voting is finished to improve the balancing on some screens.

My initial idea was to let the player grad onto the wall so he doesn't fall down immediately, but I couldn't figure out how to do this quickly so I did dismiss this idea for the jam. Maybe I will have another look into it now without the pressure of the deadline.

I'm pleased you enjoyed it. Credit for the music goes to the awesome Tronimal, who made a remix of my very basic song. You can choose which version is played during the game if you press select on the title screen.

Cool to see an entry with real coding work behind it among all those GBStudio entries (like mine). Props for that!

I'm really bad at this (my high score is 1) but it was oddly addictive nevertheless . The short amount of time one try takes and the ability to directly restart the game makes this the perfect "ah damn, I'll give it another go" game. Quite nice adaptation of an endless runner game for the Game Boy.

Did you use GBDK or Assembler to make this?

That was surprisingly dark. I didn't expect that. It is nice to see themes being explored on the Game Boy by homebrew devs which Nintendo would never have allowed back in the day. I really enjoyed your graphics, they are top notch.

This is a really good entry for your first game jam. I hope you continue to make games and maybe even flesh this one out a bit more.

Thanks for the hint, now I found it. Really nice idea to put the background story into an optional part of the game. It feels rewarding to find it, even if I needed a hint :)

I had a lot of fun playing this. The time travel idea is great. It makes an interesting game mechanic for puzzles and perfectly fits the theme of the jam. There is a lot of potential here. I hope you continue to work on your game. I would love to  play more time based puzzles.

Letting the bosses difficulty scale with the usage of the time travel mechanic is a clever idea. I had to do a second run because I just couldn't beat him with one heart. Furthermore I wanted to see what's in the laboratory. I was a little disappointed there wasn't anything to do, like a special item or easter egg. Or did I miss something?

It's impressive that you've managed to make an English and French version in only seven days.

Overall an entertaining entry. Keep up the good work.

I'm a big fan of turn based RPGs, so I enjoyed playing this. Being able to save anytime you want is great when playing on a handheld it gives you the flexibility to just play a few minutes. I liked the shortcuts and teleports into the deeper levels of the dungeon because it saved me from walking trough areas I've already beaten.

I think a great improvement would be to tell the player how many damage his attack has done. I understand that you don't want to tell the player the enemies hit points to keep up the tension during the fight, but maybe you could display something like "Your attack dealt 3 damage". Without knowing how much damage my attacks are doing, I didn't feel any progression through leveling up and finding better equipment.

I like the the idea of having to make money to be able to see your wife and help her. I hope you are going to flesh this out more or remake it in Godot. Maybe some mini games for making the money would be a good idea to make the game more fun. At the moment it is a bit repetitive.

That's a good time. I haven't been able to get under two minutes so far.

Wow that's a really impressive time. I haven't been able to get under two minutes so far.

Thanks for the detailed feedback. I'm planning to do a little update after the voting has ended which will address some of the points you mentioned. I want to make a few (wall) jumps a bit easier and being able to restart the game (from the finish screen) is a good idea to keep up the flow.

I don't know whats up with the player character after respawning. The spikes and holes are triggers most of the time. On enterI set the position of the player to the start position. GBStudio seems to keep the momentum of the player anyway. At the moment I have no idea how to fix this. Maybe I will have to modify the engine.

Initially I did not plan to continue to work on this after the jam but designing these small one screen levels was really fun. So maybe I will add an extra level. I still have some ideas for new game mechanics, like moving or disappearing platforms but am not quite sure if I will be able to realise them in GBStudio.

Thanks again for the kind offer of doing a remix <3

Thank you for feedback. Initially it wasn't my plan to continue to work on this after the jam. But as I had fun designing these one screen levels I will maybe change my mind.

The momentum after death thingy is really annoying. I have died just because auf that quite a few times on my testing sessions. At the moment I don't really have an idea how to fix it.

I'm happy to hear that you enjoyed playing my game.

I've loaded all the entries onto my FlashCard and am planning to play and rate them in the coming days. So I will make sure to drop you a comment on your submission page.

Credits for the music go to Tronimal, who made an awesome remix of my very basic song.

Thanks for reporting this bug. Jumping isn't normally supported by the engine I used. This is why it is a bit buggy. As this was made for an art contest I'm not planning to fix it.

Thanks for reporting this bug. Jumping isn't normally supported by the engine I used. This is why it is a bit buggy. As this was made for an art contest I'm not planning to fix it.

Reply
Game Boy Showdown community · Posted in Are you streaming your dev journey?
invertedHat194 days ago

I'm happy you enjoyed it

Well it‘s not like I invented the concept. Basically it’s a very simplified version of rouge adapted to the GBStudio limitations. So go ahead. I‘m curious what you come up with.

Huh, I guess I missed that part. I delivered all the gifts and returned back to the sleigh. Where can I learn where the artifacts are coming from?