Hey, thank you for your critics, I appreciate that.

First of all I have to say, I'm a hobby-game-dev not a professional. So I think this might answer some of your questions already ;-)

I started this for and with my son, just to have fun. Then I got pulled in more and more and the idea of creating a whole game out of it, with upgrades and stuff didn't let go anymore.

The partial lack of a consistent growing difficulty level as well as some conceptual bugs or even wierd sound effects are surely related to the fact that I dont have mutch experience in game development.

"The "reveal all secrets" upgrade..."

Yes, if I think about this, it seems to be in fact a conceptional bug. I apparently never tested this caves with the "reveal all secrets" upgrade.

The possibility to switch the upgrades on/off would realy solve this and would also be a benefit and additional user freedom. Will check this for a next update.

"Why are there lives?"

"At the start of the game, the fact that pushing sometimes doesn't work..."

When a started with creating the game, I wanted to stick closely to the original Boulder Dash from C64 that had lives as well as the unpredictable push success of rocks.

But you are right the lives does not make a lot of sence anymore since the game evolved and with the possibility to restart every cave.

"Why are there no level names in Wonderland?"

"The first level in Wonderland is quite hard..."

Wonderland is weird stuff and I simply got tired to come up with new names for every cave :-)

"The alt key for placing bombs is weird. I would suggest X or Z."

Right. I moslty played the game with the gamepad, but for my next game I will make that customizable.

Yes this is certainly too mutch.

"I find the sound of many gem drops annoying"

Sound and sound effects are realy not my thing. I got the gem drop sounds from some original SID sounds but played around with them (for the worse I suppose)

"I still cannot finish Ghost in the Shell..."

Hmm honestly, I have to replay this first some day, to be able to gave a propper answer here.

"Why is New York twice in the list of levels?"

I realy thought I had corrected this before launch. But if it is still there twice, it is a bug.

Hope this answers some of your questions and thanks again for your great feedback!

Congrats, you made it!

Thank you for this great review! Also check out Toma's discussion about playing Micro Dash.

And one tip just ahead: Since Micro Dash is also inspired by Metroid (NES), there are a lot of hidden paths to find and hidden gems to catch. Almost every second cave has its secrets.

Have create a space for tips and tricks: https://inarisoft.itch.io/micro-dash/devlog/364095/tips-and-tricks

Wow, I've just seen your amazing effort on resetera. Thanks for that. Unfortunately, I can't register on resetera because my e-mail is not accepted. But if you like, I will create a Dev-Log for this page to share tips, tricks and maps!? I can also help if there are questions on gameplay.

Please note, that there is a second info-page. You will get to it by using the Info menu and then use space instead if esc: 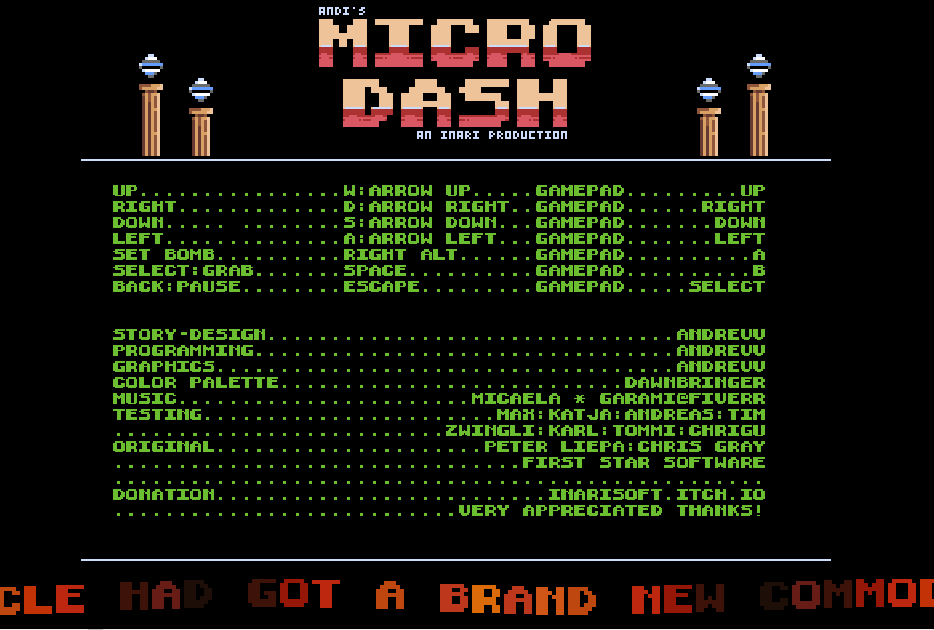 Shoud be fixed within a new update!

Yes, thanks a lot for your support, you are a great tester! If I need a tester for my next game, I will definitely come back to you! ;)

Ou yes, this was another bug. I've fixed that one too and you should be able to update the current version 1_3. I also extended the time for this cave to 150s. So if you see 150s on the beginning of this cave, your update was successful.

You are good! Yes the space-grap move makes it more easy in this case and will help a lot also in other cases. But you will need such skills like the above to get far ;)

Arrg, I forgot to remove the debug-code! So yes, take it as a gift specially for you and your help :) I will cleanup the version now.

Yes, sorry for that! Now it should work. Please make sure that you have the newst updarte 1_3_win installed. Maybe you have to reinstall it if the update is not identified by itch.

Thanks, this should be fixed with the newest windows version. If you use mac or linux version, please tell me, will try to fix it as soon as possible.

Wow, thank you very much for your great review, I very appreciate that! I was always a huge fan of the C64 Boulder Dash and this is my fist and yet only game I've ever made so far.

Also appreciate your critics and will consider it. It's true, the game is a bit hard, and it would be nice to access some content more easily. But maybe, if the game attracts some bigger community, or I find some time, I will do another sequel of the game.

Thanks, very nice to hear that. Enjoy!

The progress is automatically saved on your selected card. This is every time you win a cave, but there is no manual save within cave play. So you have to win an entire cave to save your progress and unlock more caves to play in.

Thanks you too for supporting poor people and children of Ukraine! Hope you like the game and give it a rate :)

Fine! What you can try too, if you didn^t have already, is to plugin the controller after the game has started. This might work. Otherwise just without controller, sorry.

Thanks for playing after all and if you like it, I would be happy for a rate.

Hmm okay, lets give it a last try, I have added another patch. If you use a controller please also try without the controller  connected.

Hi and thanks for the report. Unfortunately I don't have an intel macos so I'm not able to test this by myself.

But I just uploaded a patch. Please try again.

Great demo! Controls, animation and sound are just perfect. I miss the story line a bit and the first "Boss" seems to have a simple weak-point. But all seems very promicing to me. Have supported the demo and definitely will buy a full version.

Hey, it is the last day of the year and everybody seems to have a party  (except me elephant). So nice! Thanks for this fantastic little game by the way. Well done and happy new year! 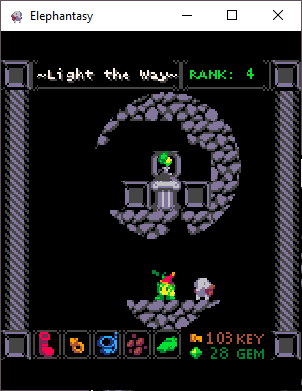 I have still the same error.

Same problem here. I've payed a tipp for the game and it would be greate if we can fix this problem.

This adventure is just beautiful and well made considering  the limited resources that comes with a one.dev.shot, as I can imagine. It reminds me of the old adventure games that I have played as a kid like all the LucasArts games where you can just explore and there is always a funny or unexpected twist around the next corner.

The story telling is great and I love the "new" element to select reaction by feeling  as well. The sound is relaxing and the graphics beautiful and just reduced enough to relieve your own imagination .

Thanks for this game!

Reply
Milkmaid of the Milky Way community · Posted in How do I exit?
Andrevv1 year ago

Thanks, had the same problem. I would recommend to have a "Back to Main" button in the play menu.

Okay, I get it to work now. Your build is fine but on newer ubuntu versions, the libpng12-0 is not available anymore and one has to install it manually.

For others that face this problem, follow the instructions here:

Thanks, the script has brought me a step further. It sets the library path to the base dir of the game. But still when trying to start the following error appears:

I searched for libpng12.so.0 but this seems to be missing and was not coming with the download.

The new download I cannot open at all. It seems that the gz contains another gz that cannot be extracted.

Hi, I tried this for linux but are not able to startup. exits with:

I just extracted the gz to a directory do I have to do something else before starting? I'm on Ubuntu 18.04.5 LTS

Glad that you like the game. You don't know the original Boulder Dash game, do you? The Amoeba has to grow until there is no space left to grow further. Under pressure that Amoeba turn into diamonds. So wait until the Amoeba behind the wall has turned into diamonds, then go for it.

Thanks, glad that you like the game. Yes, bombs are fast and tricky but with a bit of practice it should be viable.

Hi, It seems that the taxform is broken. It shows a scattered page and the continue and exit button is not working. I using firefox browser.

Wow, how old was I? five, maybe six years old boy playing this by the shore, over and over and over again. Great work and thanks for the memories coming into my mind by playing it now - light-years away!