I'm very glad to hear you like Brighthammer! Would you be interested in me hiring you do do a Brazilian Portuguese translation? If so, let me know so we can work out the details.

Thanks very much! That is precisely what I was going for.

Thanks very much for taking the time to comment AND for reminding me I need to make the single page PDFs available.

Thanks! I should have done it sooner, but condensing the booklets into a single PDF is just a lot easier to manage.

Thanks very much for the feedback. People reading this on a screen is initially why I included the booklets as single page PDFs. As I want these to be as accessible as possible, I'll upload single page versions again.

Thanks for checking. You're not blind; I simply haven't added the terrain cards to the playtest packet. They're coming soon.

Thanks for checking out my game! I have about four other factions ready to go, but worried that putting out too much too quickly might be overwhelming for new players.

Out of curiosity, what faction would you like to see next?

Thanks very much. I'm in a similar situation; no time or space to collect or play miniature wargames like Warhammer or Warmachine despite still really liking them. Smaller skirmish games Frostgrave have been scratching that itch (and are great games), but still require space to play and store models. I'm trying to see how compact I can get a wargame while still keeping it fun.

Howdy, thanks for asking. Here's a diagram to help illustrate: 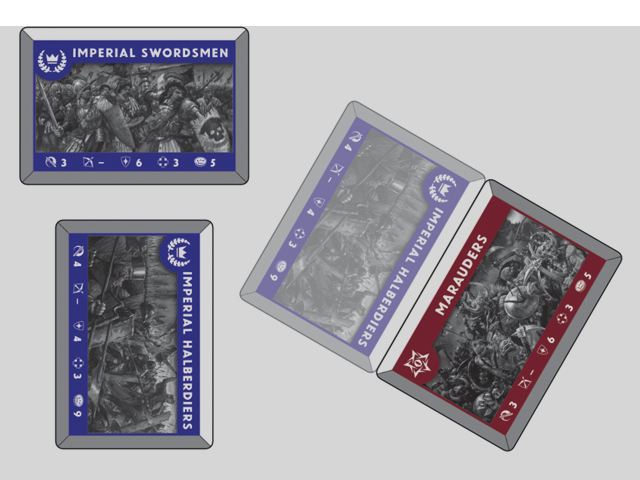 In the image above, both the Marauders and the Imperial Halberdiers are behind the front edge of the Imperial Swordsmen (light gray area). So the Swordsmen currently do not have line of sight to either of those units.

Rats, rats, rats. I'm not sure how that happened, but it's definitely a mistake. The Imperial Lancers should have an armor score of 4. Not 5. They're better armored than the Hussars, hence them being more expensive. I'll have to fix that this evening.

Currently, giving a subsequent order to a unit requires you to re-roll that unit's command die and getting a higher result. There will be rules for assigning additional command dice to guarantee a unit perform a second or third order, but those haven't been added yet.

Ooh, nice! Printing the units out on 3x5 cards would absolutely make them more durable. You'll have to do some repositioning though, as the two versions of the page are letter and A4.

As a huge fan of both the Monster Hunter franchise and journaling games, I'm embarrassed about how long it took me to discover this game. I haven't played yet, but I am wildly impressed with how well Apex Hunter captures the spirit of MoHu in a compact, rules light format. I love that there are four different monsters in the book, as well as rules for making equipment from them. I see a huge and exciting potential to make additional "location" books, each with a host of new monsters. Highly recommended.

Okay, cool. That _is_ how I exported it, so it's not a mistake, but looking at it now, yeah. That's not great. I'll see if I can fix that for the single pages version.

Thanks very much. Is that in the spreads PDF or the pages PDF?

I honestly didn't think about how difficult the notes would be to read in the single-page format, but looking at it now, it might be better to not have them cross the page like that...

If you wouldn't mind attaching a screenshot, that would be great.

I'm glad I finally got this done and out to people. If you find any typos or parts that are unclear, I'd greatly appreciate you letting me know. <3

Awesome! I can't wait to see what you make with it. :)

I posted the logo over in the new Brighthammer community.

A few people have asked or expressed interest in making third party content for Brighthammer. Which is awesome! I'm stoked that people like my game enough to want to make their own stuff for it.

You can absolutely make and sell content for Brighthammer, provided you include the following text somewhere:

You can also use this logo if you'd like:

What you absolutely cannot do is make content for Brighthammer that promotes racism, fascism, sexism, homophobia, transphobia, etc. Not even Brighthammer villains are those thing.

Thanks! Like you said in your first comment, the typeface is doing a lot of the heavy lifting to convey the tone of the game.

Thanks very much for taking the time to comment and for that amazing review! (Honestly, I don't know how you manage three kids; I'm up to my eyeballs with just the one.)

I'm seeing now that the "bright" tone of Brighthammer is fairly light in the core rules. I'm (slowly) working on some supplements and they'll make the nature of the game more explicit. For example, there are no selfish or negative drives in the optional rules for Motivations, and adventure hooks will never be murder for hire. Or anything for hire for that matter.

Lastly, while it's still just a nascent idea at this point, you might be interested in this logo mockup I made: 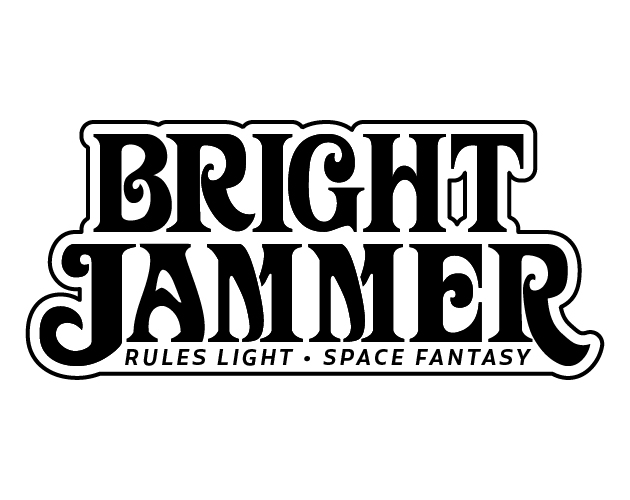 I cannot wait to see what the one-shot you wrote looks like. <3

Howdy! Thanks for the review. Please do let my know (either here or privately) how your Brighthammer game goes.

Thank you so much! That really means a lot. <3

Thank you so much for that glowing review! I am incredibly pleased that you found the game clearly explained, well laid out, and easy to pick up.

That seems to be what most people want, yeah.

Thanks very much for checking the game out! <3

For right now, I'm keeping BRIGHTHAMMER setting-neutral high fantasy so that it's compatible with as much existing content as possible. But past the three zine Player Handbook, GM Guide, and Bestiary? Who knows. I do have a few adventure scenarios percolating in the back of my brain, and those have an implied setting. So it would he very easy, and compelling, to make some setting pamphlets...

No worries! Please feel free to share any and all questions, comments, and constructive criticism. I want people to be able to use these materials, so knowing if something is missing or unclear is really helpful.

Thank you! A visually appealing layout that was still functional was my goal, so I'm pleased to hear that's the case.

Funnily enough, I was brainstorming some ideas for magic rules yesterday. So I think there will definitely be a magic booklet in the future – though I want to get the GM Guide and Bestiary finished first.

Please let me know if you do get a chance to run it. I'm still writing the GM's booklet and only just decided to make a Bestiary, but I intend for Brighthammer to be compatible with any fantasy adventure modules you have on hand.

Gotcha. Thank you. I was scrambling to get my kid up, fed, dressed, and out the door while also getting this done, so the layout of the character sheet was rather rushed. I'll definitely be rearranging/resizing some elements to add a six space damage tracker at the bottom of page 2.

Thanks very much for checking out Brighthammer, and for commenting on it.

I'm glad the layout is so readable, and that you were eventually able to figure out how to play.

Can I ask what part was confusing at first? While I want people to look at Sledgehammer too, I want Brighthammer to be a self-contained game.  Having to look at another game to figure out how to play is a sign I can make the Brighthammer rules easier to understand somewhere.

Thanks again for the feedback! <3

Thanks so much! I'm glad you enjoy it.  The mechanics are slight tweaks of Sledgehammer (which you should absolutely take a look at), and the corner doodads by Feral Indie Studio really look great.

Finally managed to win another game tonight. I made it to the Escape Pod with:

So my final score was fourteen (14) points.

At last! A game that didn't end with a negative score.

I got in three more games at lunch today, but only managed to win one of them. (Damn it sucks when you're carrying all three Essential Gear cards only to have three high value Threats lined up in front of the Escape Pod. D: )

In the game I won, my final score was negative 4.

Again, I think I tend to SNEAK more often than anticipated.

OH! Something else that occured to me after this last game regarding Objectives: It might be better to have Objectives resolve whenever the player choses (like Weapons, Gear, Threat, and Healing cards), rather than requiring them to be left for Last.

Why? That would allow the player to resolve the Objective before resolving beneficial cards, possibly allowing them to get a few more points when scoring.

For example: Imagine the last corridor is three Healing cards and the Escape Pod (I've had this happen). If the Escape Pod card must be resolved last, I either have to equip or discard those Healing cards. While I may be able to use one (raising my Vitality for more points), most of them will have to be discarded, earning me no points when I score the game.

But if you allow players to resolve Objectives whenever they chose, I could resolve the Escape Pod first. Which I believe would end the game before I have to resolve and discard those Healing cards, getting me more points.

Something else I noticed about the tiered setup after two more games last night:

I am reluctant to use high value Weapons to face low value Threats in the early and mid-game. It feels like a waste, as I know there are bigger Threats coming later on. That means I'm often losing a fair amount of Vitality early on, as I face the smaller Threats but chose not to use my Weapon against them.

I get the sense that I SNEAK a lot. I'm not breaking the "you can only SNEAK if you didn't do so last round" rule, but I'm very willing to bypass corridors if I feel there's too many Threats, that the Weapon & Gear I currently have is better than what's in the corridor, or there aren't any big Threats in the discard pile. Because of that, I think I often end the game with a large number of Threats still in the deck. That's not an issue with the rules or anything that needs fixing or adjusting mind you – just my playstyle.

because of that I'm reluctant to institute a "one SNEAK per game" rule, but I'm still curious to know how that works out for you.

1) Gotcha. As you mentioned on Twitter, I think making Objectives their own kind of card – one that is always placed last in the corridor – would make that rule clearer. And would also allow you to introduce new Objectives for variant games or "expansion packs", as you said.

2) I think a rule like "+5 points for each non-Essential, non-Backpack Gear equipped" sounds good.