Well that's pretty weird. I've tested this on a friend's laptop with no issues, and I have no idea why only one button out of all of 'em would work for you. Did you have any unusual peripherals plugged in or something like that?

Thanks :)
Just maximize the window, might be your best option. I find gamemaker's fullscreen a bit unreliable so I mostly avoid it tbh

Thanks for taking the time to play :) I found it really interesting that your play style is different to mine (I often cheese the jump-based combos and ignore my gun) and it's great that I accidentally managed to allow player expression!

Had to catch the recording since I think this was midnight in UK time, but great discussion :) I'm glad the options for customising all the cosmetic visual fluff were appreciated

Thanks for playing and providing the in-depth commentary :) I'm really glad everyone seems to enjoy the Tron fight

It's not explained properly in the game itself, but reaching max monies ($2000) nets an extra life then the score resets :)

Thanks for playing :) Really enjoyed your video (you highlighting the objectives and random events bar makes up for my unforgivable lack of a tutorial...)

Thanks for playing :) Glad you had fun,

Unless GMS2 has some build-in shortcut for fullscreen I don't know about, just maximising the window might be the closest you'll get

Honestly I was wondering if they worked for the genre or not. I wanted to include events in a way that was inspired by World of Horror, but I guess pausing the main gameplay isn't to everyone's tastes. Good to know for the future though!
Thanks for taking the time to play - you can turn off the Luck events completely in the menu btw

The entrance to the castle was the last stage I'd worked on, in the first build I uploaded to itch I had forgotten to take the player back to the main menu afterwards, soooo that's completely my fault, sorry :P

Thanks for playing :) TBH I was worried about the combat being too easy, hence some nasty attack bars that can catch you out, though you should be able to get to each slot within the timer for each fight. Glad you appreciate the flavor animations

Nothing ever gets finished here :D

Thanks for playing, glad you had a good time :)

Yeah, I only found that out after finishing and uploading this :P

I like this :) Weird coincidence, I was reading about Pocket Card Jockey just earlier, pretty similar stuff. Makes me realise there aren't enough puzzle-racing games out there

It's Breakout, but your paddle (Ship) can move vertically a bit as well, and your paddle has HP so avoid bullets shot at you. And you can hit Space to alter the ball's direction to be upwards. Main difference to normal breakout is you don't need to destroy everything to beat a level, just the Miniboss/Boss :)

I took one of the palettes from Lospec, and made some changes myself, to arrive at this: https://imgur.com/aMjYhIx :)

I like this :) great parallax, feels solid, just a shame I can't see more (if there is much more?) since I'm pretty bad at it. Maybe I'll try playing w/ gamepad instead of keyboard :)

Unfortunately I've got no way of testing mac builds

Here's a small but fairly polished thing I've been tinkering away at in the evenings for a few weeks or so :)

For literally years I wanted to make something like this, but lacked the knowledge regarding how to manage persistent mech/character customisation that's also easily scalable and editable. So I finally figured out how to manage this kind of data, finally learned how to program controller input, and, by some miracle, somehow made enemy AI that behaves pretty well.

Main inspiration for this was Armored Core 4/4A - specifically the 1-on-1 matches. There's something about the sleek and high-speed (and high-tech) style of mech in that continuity that I just really wanted to try to capture in my own, much more limited retraux way. 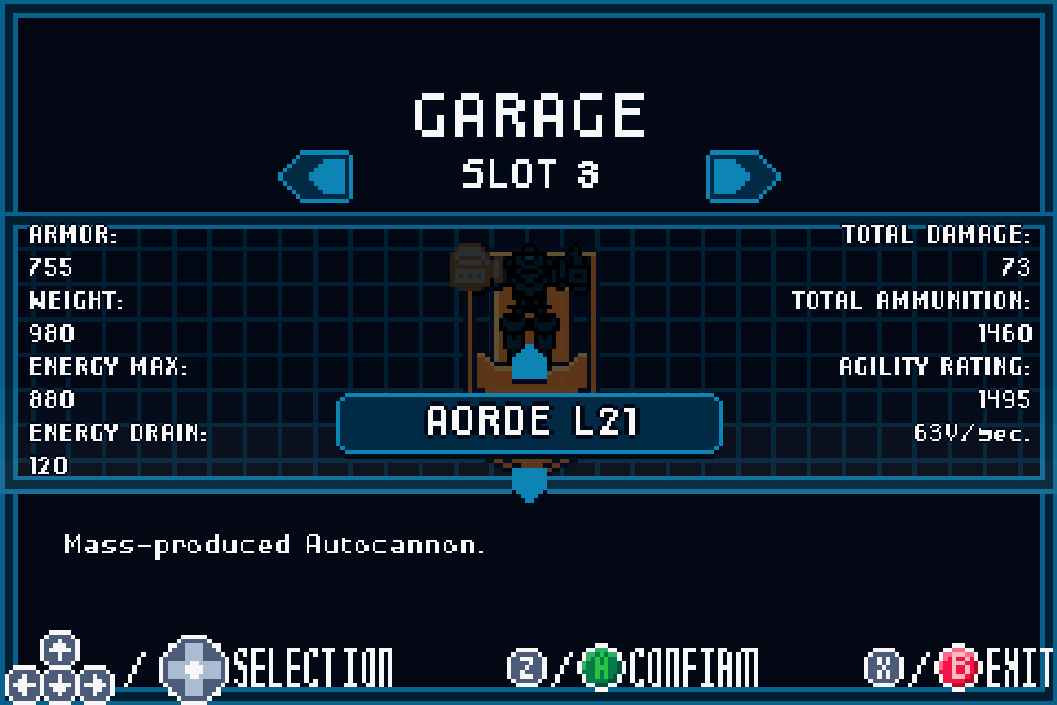 To be honest, I'm not very good at the genres either :D Glad you were able to get to the end though

I think I used a 2x2px or 4x4px image like that, just in case using a non-uniform sprite would cause any scaling issues (it would probably be fine though, GMS2's tiled drawing is good) :)

Then if you wanted to get fancy with it, give players an option for rotating the scanlines 90 degrees, since some people prefer their scanlines vertical for some reason

Easy :) a small image of a black line plus a transparent line underneath, drawn tiled, at viewport scale and about 0.1 opacity, in the DrawGUI Event of a GUI object I always keep on the top layer

Thanks for trying it out :) I was kinda hoping that people would come back to it a couple of times after first play - see if you can trigger the additional stage bonuses by doing the secret objectives in some stages :D

Thanks for playing, glad you had fun :D

Yeah I can never recommend it enough. ZeroRanger and FAITH are the 2 games that made me really want to pick up hobby development again after years 'n years.# :)

I use GMS2, so it's written in GML (no additional libraries or extensions) :)

Which made everything nice and easy to make, since GML is so forgiving to non-programmers

Did you trigger any of the Bonus conditions in the non-bonus stages, by any chance? If not, something to aim for next time :D

Thanks for playing :) and you found a bug at about 18:40ish I had no idea existed. It's making me realise I need to communicate mechanics and stuff much more than I do :P

Continuing the trend of making small arcade titles while working from home, I got a bit inspired by the Death Race films in all their delicious cheesiness.

So it's pretty much some kind of combination of Bump 'N Jump and Spy Hunter, in the format of an endless runner (driver?) with special "Enforcer" enemies, different player weapons, and satirical TV show style presentation.

Make the crowd cheer and pump those TV ratings up! 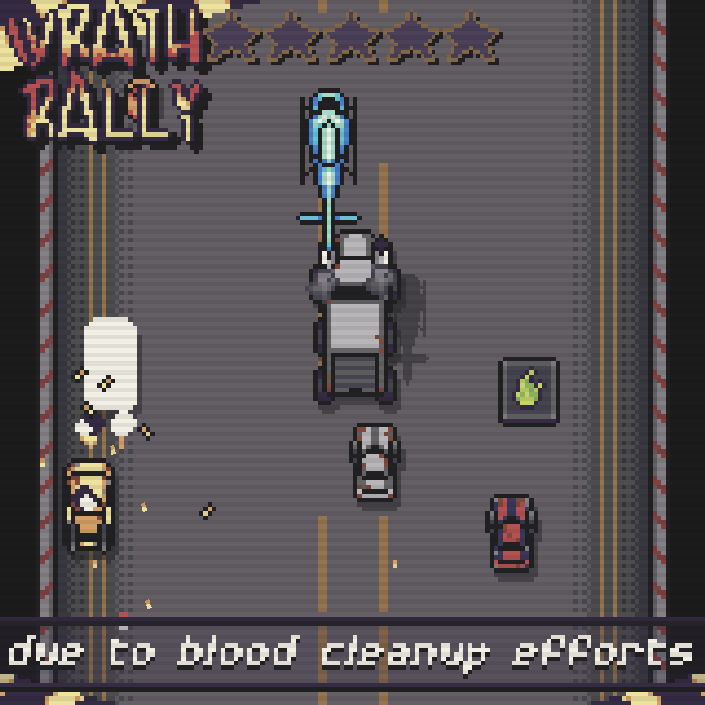 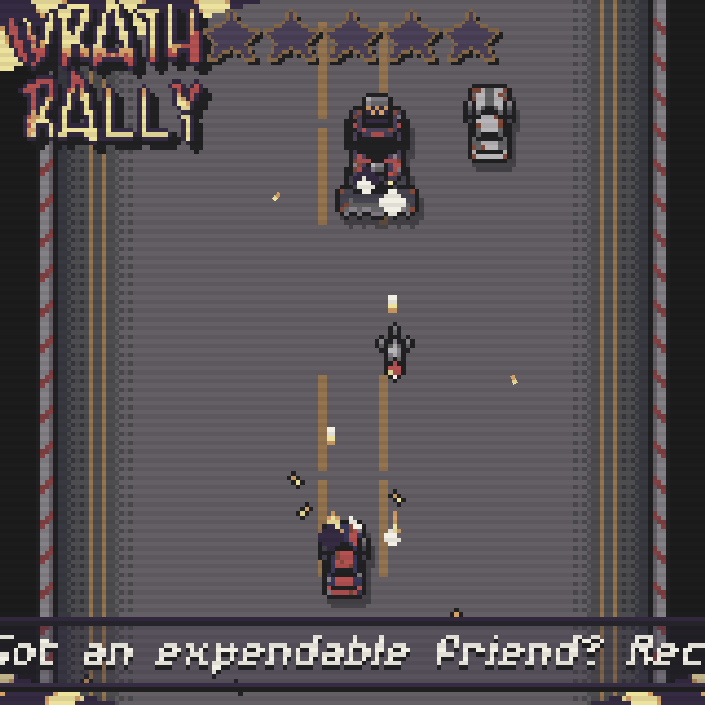 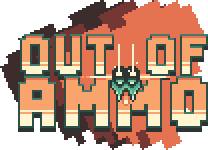 Here's a small arcade-y thing I've made using a couple of weeks of after-work-hours time. It started as just "Oh hey, I wanna make sprites with better shading than I usually do, and in a green/orange style like ZeroRanger" - then I made something vaguely in the direction of Gunbarich/The Lost Shield/Ghox/etc...

Basic premise: you're a typical shmup ship, but you've used up all your ammunition. So what do you do? Eject chemically-volatile Fuel Cores from your engine and use the thicc end of your ship as a paddle. Obviously. 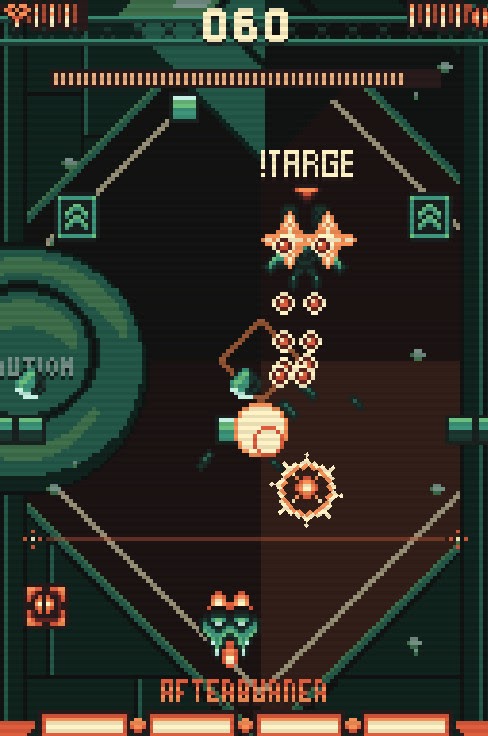 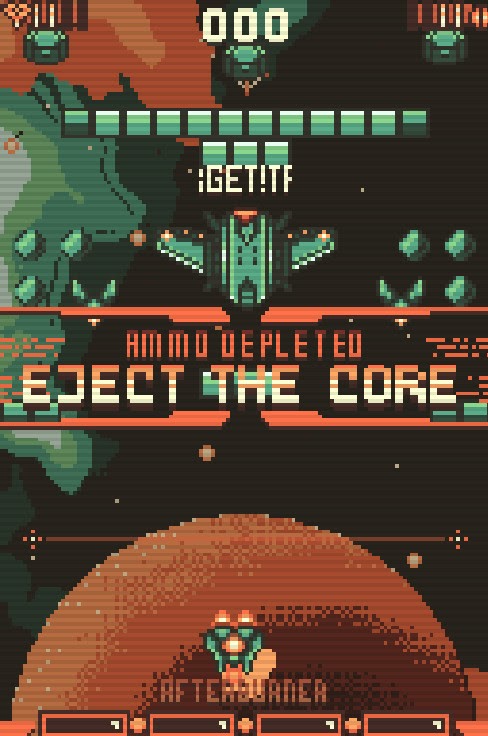 Honestly it's a miracle it's finished at all, considering how bored I get with anything after making the basic mechanics :P

Thanks for the feedback, and for playing :)

The saprophyte's "memory" is limited to being able to open tiers of locked doors, as well as assuming the form of the story-specific corpse in the Talisman AI Core - while its AI was the best I could do at the time, it's nothing too special.

The saprophyte AI is designed to patrol randomly, with a bias towards tiles it hasn't stepped on recently, and head towards new doors or yummy corpses (or the player of course) if it has line-of-sight. It uses invisible "heat" AI objects to determine if the player has recently been somewhere, used a Terminal, or opened a Door, so it does have some limited capacity to remain in an area you've been in recently. But the saprophyte's "intelligence" is, for the most part, smoke and mirrors :) But I'm happy that it can be mistaken for more clever than it really is :P

The sad thing is, there's a good chance you didn't see it again because it was thinking it was really sneaky and hiding behind a pillar waiting to ambush you... but you never came :/ like having a birthday party alone... (It hides behind foreground tiles based on simple conditional & collision checks)

Thanks for playing -  I was actually worried it would be too easy :'D

Looks like I might have to signpost some things - like the switch in the Manor that turns off the lasers, or making it more obvious that you can hide in that one air vent, disable the rockets robot, etc