Pixel Fireplace comments · Replied to Ted Martens in Pixel Fireplace comments
hourig77 days ago
Ah, that makes sense! Didn't see the chocolate, but 'mallows burnt to crisp become much lighter in such a "sandwich". We hypothesize it's the unburnt inside part showing through, why not... Attempts to fry some bread or light up a wet log pile proved unsuccessful, but the ability to blow out flaming food was fun. Though tossing burning food _into_ the fire would make more fire safety sense than tossing it "somewhere" (yeah, some people hoped for a larger fire and seeing the marshmallow become extra-bright, if short-lived, fuel, like newspaper and paper tissues do). Oh, and, as people who've tried starting a fire from a match, everybody I know tried to use newspaper as kindling before lighting a match!
Reply
Pixel Fireplace comments · Posted in Pixel Fireplace comments
hourig84 days ago

What's "smore" meant to do? It highlights the letters like it's a valid command, but doesn't accept it to do anything. If I try to add an extra letter, the only working result is adding a 'd' - at which point it parses "red", which is not what I mean ;)

Fascinating how I can eat a flaming hotdog! I'm a fire-eating dragon, roar!

Still does, by the way. With a "Core dumped" complaint in the terminal.

Reply
Clam Man 2: Open Mic community · Replied to Marafrass in Extra-slow Unity on Linux... and a bagful of other things.
hourig362 days ago (1 edit)

(I haven't gotten through everything yet, so full reply pending, but here's a status update).

In browser mode it doesn't run at all. I think it's because I don't have Unity Web player installed (and I'm not sure the beast exists for Linux at all - all I find is ooold requests for one).

I've (reluctantly) rebooted to finally give the NVIDIA-blocking version of /etc/modprobe.d/blacklist.conf (pinched off a friend with similar setup) a spin:
blacklist nouveau
blacklist drm
blacklist drm_kms_helper
blacklist ttm
blacklist mxm_wmi
alias nouveau off
(some of the modules don't seem relevant, but I'm told they very much are. I took his word for it - though he's forgotten the reasons, I never knew them :D )

Intel-only rulez! Now mouse feels more like "a computer with slightly different speed settings for pointer movement than what I'm used to" and it doesn't take ages for Clam to cross a room or for me to aim at a menu line. So, definitely looks like "CPU can't do that much software rendering emulation, need hardware GPU - even 'slow' Intel will do".

Still don't know what's so computationally-intensive and am sure there's a possibility for optimisation/low-quality mode, but the work-around worked.

Which, of course, means a lot more of things to talk about, but not quite now. Just checking in and letting other unfortunate souls know about a possible solution :)

Reply
Clam Man 2: Open Mic community · Created a new topic Extra-slow Unity on Linux... and a bagful of other things.
hourig363 days ago

Sheesh, that thing below looks scary! A bit like that elevator shaft o_O

Apologies, I'm rambling and verbose. In my defense, I'm half-asleep and if I leave it "'till later", "'till I edit it and make it shorter and more concise" or any of that sort of thing, the antonym "verbose" will, sadly, be "silent". Which, I'm told, is no good in a bug reporter!

Technical details: Dell laptop of 4 (or 2 hyper-threaded, dunno) CPUs and 8GB memory running 64-bit Debian Linux, Intel/Nvidia hybrid card, nouveau kernel module loaded and, as far as I understood it, that means the NVIDIA part of the hydra is always on and the Intel part is not. Until two days ago I thought it could do anything I need. Within reason, of course, but a point-and-click game fell well within my boundaries of "reason".

Mouse moves quickly while Unity logo is up or when I move away from the game/VNC window. In the game, though - ouch. I've gotten through the beginning by using the keyboard for 1-2-3-4 option selection (very handy!) and had a lot of fun deducing what the first game looks like, but now I simply can't continue. That sort of "Slow" can be ignored in menus that are used very rarely, but figuring out the environment at such speed requires the mastery of Zen and two kettles of tea per room!

Internet suggests "Reduce the quality" - no such option in this game - or "Turn off Vsync" - done in the Unity development interface, which I don't think I have. There's a third option that involves playing around with the NVIDIA part of my video card (culling it, most probably, and keeping strictly Intel - apparently it's hard to get true hardware acceleration with free NVIDIA drivers and, I guess, the software approximation is not enough, so "economy-powered" and "slow", but really GPU-powered Intel might work better) - but, really?! It's strange to see 3D games in Wine run with barely a hitch, if a little CPU spike, and a 2D mostly-text game to run into so much trouble.

Any possible help? Location of debug logs, "--debug" flags, something?

Regarding other things (the aforementioned bagful that was meant to be a small P.S. ):

2. I'd really appreciate tooltips on the interface in the corner (if they are there in general, they probably aren't there in dialog mode - which is where I spent most of my play time. So far I've only been told about the quest log - and that was a looong way in and many a slow puzzled swipe over those icons. It's fine if they can't be used, but I still would like to know what they are. Using the "click and see" method only became possible in the comedy club lobby. Until then, throughout half of the tutorial I've been feeling like they're broken buttons - clicking doesn't work, mouse-over does nothing, what gives?

3. Any sort of a manual/readme to tell a newcomer what the keys are and where the main menu is to be found? I think it was "Escape", but I'd not bet on it. I admit a handicap - the recently-previous games I played were Grim Fandango (menu at F1) and Undertale (quitting at Esc), but that's just furthers the case in point: conventions are not always conventional. Or intuitive. It's nice to be warned that quitting now will erase progress (and be told that there is a "Save" option!), but getting that far implies that the user had found the menu. You see, at some point I was thinking of quitting by "Kill Process". That warning wouldn't have helped me then :/

So: "Numbers can be used for dialog option selection, Escape is the main menu, whatever_other_shortcuts_I_don't_know_go_here" would be a good thing to put before that "Click here to continue".

4. When I had no save files and went to "Load", there was - unsurprisingly - nothing there. When I came back to the menu, "Save" button was gone. I don't think that was an intentional practical joke? ;) 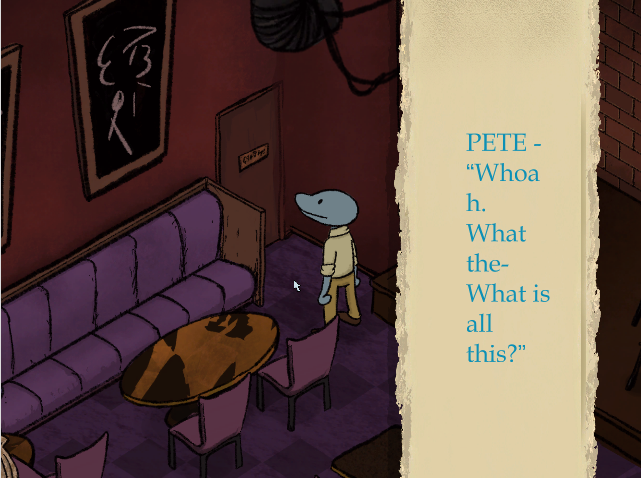 The pictures are fine, but the text definitely doesn't use the textbox width optimally. This feels like a perfect place for a size-based pun, but my real-life Improv is below Clam's lowest stat :(

Oh, by the way. You see where Clam is? I've talked to Tilda and went for a look-around, saw how badly this was going, led him to that corner, tried to settle him down on a seat, saved and exited. Upon restoring he's always trying to start from the beginning-scene chit-chat. Even tries to walk back to the bar in whatever conversation place it's meant to happen. Successfully, I think, but I didn't have the time and inclination to go through all the chat again and see whether he'll behave normally after the talk.

I really am interested in getting further, though... This bug report's length is not an indication of dislike. Quite the contrary.