GMLive.gml community · Replied to Fawf_art in [Improved in 1.0.59+] Getting a big drop in framerate after updating scripts live
gnysek214 days ago

in fact there’s nothing wrong with having 20 FPS after reload - GMLive is rather for debugging and shouldn’t be used in compiled game, so it will have no impact on final version of game.

Reply
GMLive.gml community · Posted in [Improved in 1.0.59+] Getting a big drop in framerate after updating scripts live
gnysek220 days ago

For-loops love to slow down games when using live code. I’m not sure if it’s because of “var”, or just because how live code is executed.

My solution to make it faster is to put code inside for-loop into separate script and live update only that script, not event where for-loop is.

Reply
GMLive.gml community · Posted in [Solved] Can the current version be executed in GMS 2025.5.2?
gnysek228 days ago

As GMS Feather is still in it’s early stage and reports lot of false-positive errors with GMLive, I would like to propose adding // Feather disable all comment on top of every GMLive GML script, so we won’t get any notices (as for now there’s 1000+ errors/warnings/notices detected by Feather in GMLive).

it might crash, if you try to apply it on different version, or applied any change on original files

Since we cannot re-distribute GMLive source code, but fixing for 2022.2 only requires to remove list of outdated GML functions (so that part can be shared), I’ve prepared a .patch file (which can be applied using git, or by copy-pasting without +/- characters in first column) which fixes GMLive for 2022.2 release.

You can get it here:

We will need to wait a little longer for a fix, as YellowAfterlife got more important things to do for few next days, cause of some 70yo prick who decided to ruin whole world.

Russell wrote on forums that Tuesday (1st Feb) beta version will have tons of fixes for Feather, so I will wait with reports. Generally IMO best solution would be to mark most of GMLive scripts and variables as ignored, as they don’t need to be exposed (except those that are documented, like live_call() etc.), so that requires YYG to make those features stable enough to start thinking about it (as some things are bugs yet, but are not completed at all).

I’ve added ignore before each functions that started with “vm_gml”, “live”, “gml”, “vm_group”.

Seems that projects with GMLive aren’t running in GMS 2 2022.1.464 because of Feather feature. Of course since Feather is in alpha stage and have bugs even on smallest possible projects, this seems to be Feather issue rather than GMLive and for now there’s no sense in fixing anything on GMLive side, I’m rather writing this post to inform, that if you want to test Feather, and project loading hangs - this might be the cause (probably too many code, or it crashes on some specific syntax). Further betas will for sure solve it.

with new intellisense and references finding they probably makes a big rewrite for syntax checking, so new bunch of bugs is incoming! :D

I’ve reported it during 2.3.7 beta ASAP after this feature was added, but seems that they don’t want to fix it yet…

After so many issues with 2.3.0 it’s nice to see that since GM switched to monthly releases none of them seems to broke GMLive functionality :)

Those aren’t errors, rather notices.

Reply
GMLive.gml community · Replied to YellowAfterlife in [Fixed in 1.0.47+] global variable name 'mt_gml_program' index not set before reading it.
gnysek1 year ago

So yes, it’s a bug in latest beta runner, that using “vars” as arguments in functions when creating a struct causes errors.

Also, seems that actually 2.3 causes a random order for scripts (especially on import) no matter what is their order in resource tree, so there’s a high probability that divided version of GMLIVE need to be put in some functions, so only one script will define order in which they are created. But that’s to check after they fix first bug, cause there’s no way to check GMLIVE latest version at all now in latest beta.

Reply
GMLive.gml community · Posted in Can GML Live Be used to add in patches and DLC
gnysek1 year ago

You’ve got info about it in docs, but you need to remember, that it in fact will open a security breach in your game, as basically everything can be changed by users if you leave GMLIVE in final game. Also, generally it will cause a lot of FPS drop quickly.

So, while it could be used that way, it’s not optimal and safe in any way.

Reply
GMLive.gml community · Replied to YellowAfterlife in [Fixed in 1.0.47+] global variable name 'mt_gml_program' index not set before reading it.
gnysek1 year ago

Yep, we need to wait for next beta which should be soon, and if that still happens, YYG need to solve it then.

seems to fix the issue (it might be a bug that method()+var can’t be used when creating struct).

For problem with wrong order of script execution, as for now I’ve manually deleted all entries in YYP which were starting on "GMLive and were about scripts, and I’ve manually copied the same order that was in your package.

Edit: seems that these are caused by using runner other than from public beta channel, so it’s worth to wait for next official beta.

I’m getting error when trying to run latest version:

Seems that issue happens cause GMLIVE scripts aren’t executed by order in which they are in resource tree, but by the order they are in Project.yyp, which is… random. So, in fact error messages will also be random, depending on how GM will put those files among YYP. Deleting extension and importing it agan caused totally different order in my case.

Reply
GMLive.gml community · Posted in [Answered] Step event is slow (when many instances in the room)
gnysek2 years ago (1 edit)

I’ve got one object which have around 10 nested for-loops inside, and I’m getting 2FPS cause of it, so above solutions helped me a lot.

Yeah, this solves my problem!

Definitely worth mentioning in help docs then.

To crash, I just need to run it and wait about 60-120 seconds (you can watch memory usage in Task Manager, for me it crashes around 1.5 GB used).

This is how memory usage looks on my side, the moment of crash is easily visible: https://i.imgur.com/PP5RVF6.png

Edit: here is a chart from GM debugger for above example:

After some new tests - crashes because of no enough RAM (game uses around 2GB when crashes - with only 5 lines of code).

I’m not sure that it’s possible at all, but I’m often using “named instances” in room editor (giving them custom name instead of inst_XXXXXX with random 8-digit HEX).

However when using them with GMLive, I’m getting:

Is it possible to add this feature ?

Every time I’m importing this extension, I can see “GMLive - Copy.gml” file under scripts, is this some hidden file in extension, or it’s some GM bug/feature that causes to create this file?

Seems that after last release I also can see “GMLive.gml._” which is empty…

From my experience, as this happens often to me - it seems to happen when there are for-loops with temp variables in code, and you update it several times (but it crashes randomly - sometimes after half minute, sometimes after 10 minutes). As I'm unable to find one easy way to reproduce it, I didn't reported it yet, as I know what to report in fact... this error message doesn't help.

for me, I need live_name in everything that isn't an event, so in every function (even in those which have same name as in resource tree). 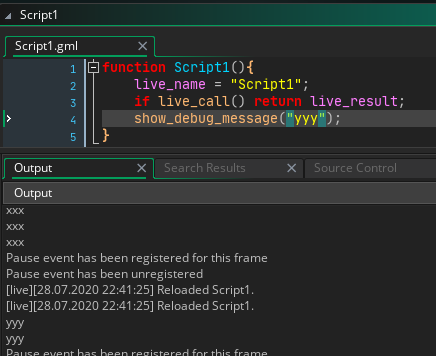 Hmm, I've got some issues with live_call() in scripts. Does it work like in 2.2, or something changed? 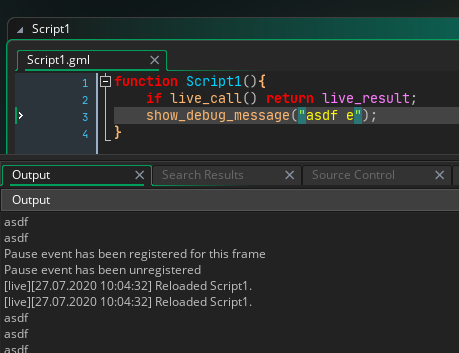 I'm getting log that script is reloaded on Ctrl+S, but it seems to still run old code... Am I doing something wrong ?

I've found some issue in console logs, but I don't know when it exactly happens:

On line 40 in obj_event_questionplate there is:

where "creator" and "_cutscene" are variables with ID of existing objects (_cutscene is just created few lines before).

Just checked and now it reloaded my code :)

But at least they added this new bug to database too, maybe it will be fixed one day ;)

Reply
GMLive.gml community · Replied to YellowAfterlife in [Yes] Will it work with 2.3?
gnysek2 years ago

Ha, BB10 for me was the first one I was able to crash silently with only 5 lines of code, interesting :P

Thanks for update, I'm looking for next betas then and hope they gonna make more fixes than new bugs :)

Reply
GMLive.gml community · Posted in [Yes] Will it work with 2.3?
gnysek2 years ago

Any progress, or bugs in 2.3 are still preventing from moving forward ?