oh weird, it wasnt working the other day but now it is. It wouldn't get past the unity loading thing at first

its not starting when i click run too :( the screenshots look very cool tho and i'd love to try it if it gets fixed!

Very cool and interesting tool. i think part of the UI is cut off in my browser, even when i zoom in or out. the lowest thing i can see is the Repeat Count, which only shows up to 3.

Very exciting! Looking forward to it!

this was really good. That ending tho...

I can read the purple just fine, but the other colors are a bit too light to read easily. I appreciate that it's more clear which choices are for which jobs tho

The upcoming update is going to give more personality possibilities to the MC. And, yeah,  the base boyfriend route is the only one that actually paces the MC's development well

I honestly love this game, but the protag's job is hard to piece together without getting a TON of the scenes. I like replay value, but it's not for everyone/

Regarding how I figured out the nature of the protag's job: If the bad boy boyfriend works as an assassin, he can eventually end up working at the protag's workplace, in a pretty high-up position. And one of the bad endings involve the boyfriend getting killed (if you max out the prince boyfriend's intelligence) while the protag has to listen to it happen from their room.  Various other things, like the fact that they can spy on p much anyone at anytime, or the way they kind of avoid talking about their job.

But the flirt seems to have the least interaction with the protag's job, but idk, I might not have seen all of the scenes for that route

Yeah, but most of them at least have some logic to them. The one for the prince route ends too suddenly, although I do understand (to some degree) why telling the Prince about your job is a bad idea, it's a bit too abrupt

Reply
Signed and Sealed With a Kiss community · Posted in is there ever going to be an official full guide?
gingerlegend2 years ago (2 edits)

I've found two of the hidden achievements I was missing, and I'm about to move onto the last one I needed. In the Flirt boyfriend route, you need to max out the Sexiness stat. For the prince, you need to max out the intelligence stat. Following the same trend, the Bad Boy boyfriend's equivalent achievement most likely requires you to max out the attitude stat.
These are all bad endings, which is super interesting. I think playing on Easy mode prevents the scenes that maxing out the specific stats trigger, so you'll need to play on Normal or Hard.

Edit: For the bad boy's hidden achievement, you actually need to max out the Anger stat.
Second Edit: By achievements, I mean the ones in the Steam version. I forgot to mention that.

When you go find your boyfriend at the park in the prince route, you get the option of telling him about your job, but then the story just kinda ends abruptly (mid-sentence), and there's no explanation of why.  Is it supposed to be a joke ending or something?

I'm super hyped for the next update, and decided to replay the game with each boyfriend once. I had forgotten about the MC's hatred for their parents, and was curious if the different possible personalities of the MC are going to have different opinions on their parents or if their opinion of them is always going to be relatively negative. Either way makes sense in a narrative way, but I get that the latter is the more likely (since having crappy parents is a plot point).

Soon as the update is out, I'll definitely be re-replaying this game.

I figured it out. You have to (try to) reject him when hiding from the cops after he shows you the graffiti he did. I still don't know how to get 3 of the achievements tho. I kinda hate the concept of hidden achievements because of that.

on the actual webpage for the game, not the game itself. sorry for the confusion

All the images aside from the first one don't work.

Is the demo the same as the Early Access at the moment?

should say modest instead of modes

Also i've played the bad boy route so many times and im still missing the first CG. I have no idea what that CG requires me to do and its driving me nuts

Reply
Signed and Sealed With a Kiss community · Created a new topic is there ever going to be an official full guide?
gingerlegend2 years ago

because i've played thru the prince route several times and i still only have 1 CG.

Are they sometimes dependant on the jobs??

What about the flirt's 5th CG? I thought that would have worked as well

I have checked the Bad Boy and Base boyfriend routes, and they both have the adult CGs, but the flirt doesn't, ironically. I haven't played the Prince route on the computer I'm using, so I haven't checked those CGs, but I'm about to. 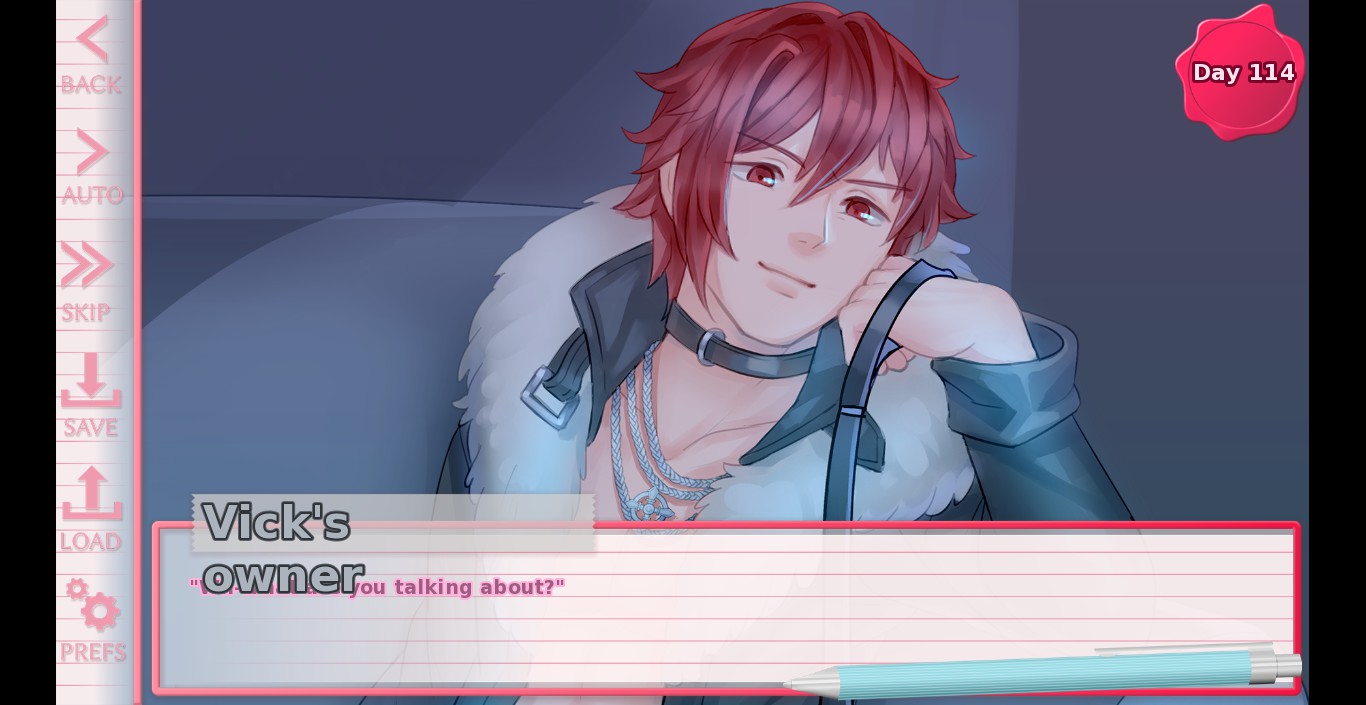 No explanation necessary, I hope.

when was the last time this page was updated??

I played this a while back, and now I've bought the director's cut. I was initially enamored with the storytelling, unaware that the concept was about depression. Now that I know, I love it even more. The ending I originally thought was the best end turns out to have been the end where the protag accepts their death. Hell as a metaphor is always powerful in my opinion, especially when it's not all fire and brimstone. I like the lore and I like the explanations for some of the plot in the director's cut.

I'm glad this directors cut exists. I hope you're in a more positive place than you once were.

My biggest complaint about this game is that if you don't give in to the sexually abusive boss, you're locked into a bad end. I won't recommend this game due to that.

So far, the prologue feels very rushed. Its trying to fit several months into around 5 to 10 minutes of gameplay. I had trouble focusing because of that. The writing is good so far though, aside from a few typos, but they were mostly punctuation issues.

I'm excited for the full release. I love how excitable Shōtarō is, omg.

Question: Are the chapters going to be updated little by little or will they be released all at once when they're ready?

This was cute. I like the use of a pseudo-Mabe Village from Link's Awakening to represent the dream in a literal sense. I think it feels very slightly rushed, but that's kind of the point, isn't it? I like the ending (pre-pong); ignoring the negative feedback was a really sweet little way to wrap it up. The use of familiarity among difference made me nostalgic, but not just for Link's Awakening. I feel like it represented the journey that leads someone to who they become. Even if I'm reading too far into it, I don't care. It's a nice little game.

There are a lot of sources you could use, because most of them are pretty misleading at face value. Google "major arcana" and you'll be able to find the meanings for all the important tarot cards.

Cool concept. The tarot cards did not match up with their traditional meanings in the slightest. There is only one card that is inherently bad: tower. Death implies a permanent change.

If it weren;t so obvious after the first playthrough, I;d be recommending it to ppl. Still interesting though.

As someone who was given the book The Little Prince when I was younger, I can say this is a really sweet tribute to it. And the depth that was added by not giving Starbot text recognition immediately was really important for the minor NPCs. Such a cute game and i have emotions to cry out now bye

OH MY GOD THIS.

(also i love ur username. Butterfly Soup is what pulled me onto this site as well)