None of those are in English. There's a reason its the Japanese VN folder.
I have ~ 700 GB of English stuff but I haven't pulled a single picture from them because 99% of translated stuff is vanilla and isn't going to contain monster girls, pregnancy, or pregnant monster girls. . 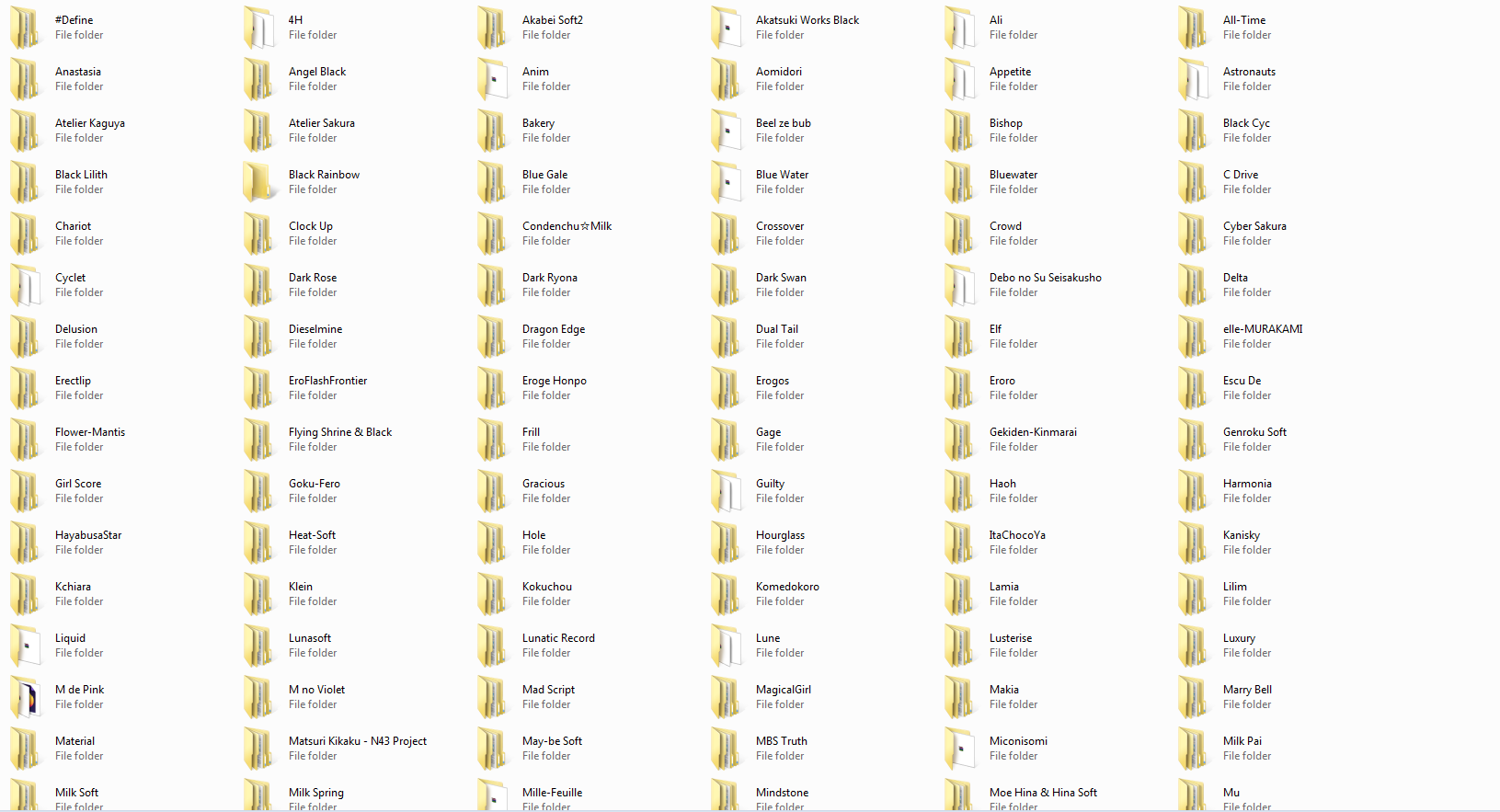 Here's a screenshot with some of the companies from the Nukige folder. I'd just go to VNDB, plug in one of those names, and look at the games they make.

Then you'll start following tags and get completely lost finding way too much shit.

Actually I'm also curious to hear what people think about using things like Honey Select or Koikatsu to create characters to use. I can even do the full gauntlet of Clothed/nude/pregnant.

She's actually a dragon girl and not a demon girl but you can't really tell that so I went with what I thought people would assume if they saw her. 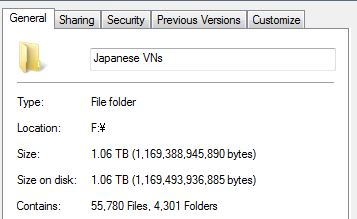 We're going to need to narrow the field a little bit.

Actually the random portrait mod recognizes split age folders like teen+adult and applies both tags to them so they can be chosen for either.  There isn't any harm in splitting them up though and honestly I wonder how tied up it gets when it has to look through so many folders. I haven't encountered any performance problems personally.

I kind of wonder how the random portrait mod runs compared to how it is documented anyway. I need to pay more attention to what girls come up in game, because it feels like I see a low variety over and over. I know the characters are persistent and you can encounter them more than once, but I need to start looking to see what folders it pulls each character from just so I can assure my own paranoid that it works as intended.

Or I just have to start executing every captive.

Yeah that's a good plan.  These ugly pictures would be fine if you could link a portrait to initial appearance,  but since you can't (unless you set it manually, and that's no fun). It probably could be done actually but Im not sure I'd rather just delete the uggos.

I'm getting rid of
-Furry in non furry folders

-Characters who look weird to the point of being alien

And keeping all the cute anime girls and even the cute western style girls.

But its not something that will be done today as I also have to go to work.

After looking through the mega pack again, I'm going to organize it again to get rid of the hair color folders once and for all. Also - I'm going to curate it bit,  delete all the ugly girls and "trim the fat" quite literally.

I haven't really been a part of the community, but I figured I'd offer up some things I've been working on.

Two different portrait packs here, one made by me and another that is a restructuring of the previous mega packs with better organization

Bad End Portrait Pack MK2 - It's not happily ever after for those bandits you beat up and drag back to the mansion. This pack takes advantage of Aric's Expansion Rebred v.08.1 which allows for different images to be displayed based on the state of the girls in your "care," so you will need that. Stripping them will allow a nude/whatever you put in the bodiesnaked folder to be used, and if the girl is pregnant a pregnancy picture will be displayed.

Most of the girls aren't too happy in their full body nude or pregnant pictures, so this might not be appropriate for the kind-hearted slaver.

1) There are only female characters currently

2) Many of the naked and pregnant full body pictures include sexual acts. Male organs are typically blurred but may be present. If you are uncomfortable with sweat or fluids (why the hell are you playing this) this pack might not be for you. There are no scat or urination pictures unless I totally missed it though. There is some minor blood from pictures including defloration and milk from lactation.

3) Some of the men involved might be orcs, demons, or other mean monsters. If you don't play as those races consider recruiting some bros to form a mighty slaving party to terrorize the countryside.

4) My editing skills suck and I haven't looked at about how 90% of the pictures look in game yet, so I have no idea if these things even really display correctly. The ones I did check were fine, but I was trying to find the girls naturally and it takes time (cheaters never win). Quality be damned, quantity is all.

Curated Mega Pack -  This is my attempt at fixing the problem that occurs if you download every pack you can find and then all it good. I had over 2GB of pictures and after going through and fixing file structure and deleting shit left and right its down to 1.2 GB so you are looking at about a 40% reduction in total numbers (And there are still over 2500 pictures).

These are the changes I made

1) No furry images outside of beastkin races. The dragon girls, taurus,  halfkin, and our aquatic waifus have been liberated from the scourge of furrydom. I recommend keeping everything active now and just executing all beastkin for peak gameplay. Praise the emperor and strike down his foes.

2) Ugly girls have been removed from the game

3) Some extremely young pictures with gratuitous nudity are out. There are only a hand full of images that that qualify for that, it wasn't some great purge.

4) Almost all Race+Race files are gone. Most of these only had one or two pictures anyway, so they were just assigned to whatever they looked like most. I think I kept drow+dark elf and elf+dark elf

5) My portrait pack is included because I didn't keep a separate master file and I did this out of my game directory, and I'm not hunting for all those images to remove. Delete the bodiesnaked and bodiespreg pictures if you don't want that stuff. On the plus side if you do like it, its up to 131 characters which is 23 more than the separate pack.

As always you'll unzip this in C:\Users\[YOU]\AppData\Roaming\Strive. Actually I recommend unzipping it somewhere else and looking at it to make sure you like what you see and then deleting (or moving to a backup folder) and then moving this in.

(Text from old mega pack below this point)

There were some problems I noticed with the tagging system used by people in their portrait packs. Many times they didn't tag sex or age, and some of the other tags were also spotty. This is important because 1) The in game options allow for filtering of certain pictures and 2) The random portrait mod uses those tags to weight certain portraits towards being tagged, and every missing tag messes up that system.

Then your picture should be tagged like RaceName HairColor BreastSize SkinColor AssSize. That will cover every kind of tag the game takes into consideration (since sadly we don't have eye color).

If you look into whatever folders you currently have, if you never reorganized them yourselves, you'd probably notice you have hair color folders before the female/male and age folders. The game defaults all non gender tagged pictures to female, and since they are almost all female that isn't a big deal. It defaults all non age-tagged pictures to adult, which is more of an issue because if any of those pictures are younger they are less likely to show up unless its an adult character, where you might want pictures of older characters instead.

Anyway you might not care about all that but fixing that is why I reorganized and reuploaded the mega pack. Personally, I don't know which pictures belong to who but I believe credit was doled out on the previous mega pack post. As I said at the beginning of my post, I haven't really been involved with the community so if I step on any toes I apologize and will take things down if its an issue.

That being said if anything in either download violates any community standards I'm not aware of please inform me and I will take them down.

Edit: Oh, also I only have mediafire so if anyone cares to upload these to another filehost that is fine with me. I might get around to it later but I'm not promising anything at the moment.

Edit2: I encountered a problem with elf pictures not display naked bodies. All the pathways seemed correct and I had no idea what caused the issue. I made a backup folder, moved all my portrait related folders into it. I then put a copy of just the portrait folders from my pack in and everything worked great. I then recopied the full folders back over and just didn't copy anything that was a duplicate. Everything continued to work fine. I have no idea what caused that problem in game because nothing changed as far as file location but everything works now so if you encounter that problem, that will fix it.

Correct me if I'm wrong but it seems like you tagged beastkin as halfkin and halfkin as beastkin.

Since halfkin=human with animal parts (catgirls) and beastkin =aminal with human parts. It actually is a problem if you disable furry content because people would then get the more heavy furry girls (beastkin) and it would disable the nonfurry ones (halfkin).

Pretty much completely flipped for beastkincats/halfkincats. Beastkinbunny/halfkinbunny are all over the place and the tagging makes no sense. I haven't looked that the rest yet. Not trying to slam your efforts but since my understand is that it impacts how the game options filter things I thought I'd say something.

I also might not know what I'm talking about in which case feel free to disregard this.