Thank you so much! I definitely have a few more things I want to add to the game so I hope you get to play it with the changes in the future! I'm so happy that you liked it!

Ah I'm so glad it resonated with you! And I did try to time the typewritten portions in time with how I would read the poems out loud. So it makes me really happy to hear you say it felt like hearing the words! Thank you for playing!

Planting Poetry - A twine game about reading poetry to your houseplant and learning to grow after tumultuous life changes.

I would love feedback on the pacing and how the text animations affect readability. Thank you!

When I joined this jam, I knew that my schedule for working on it would be weird--I had events scheduled for work and then a trip planned that would basically make the first week a wash. I also went to a concert the night of submission LOL.

Still, the theme of "healing" called out to me, and I felt that even if I wasn't able to use the full two weeks to work on this game, I still wanted to make something complete even if it was small and short. And I did it!

Planting Poetry is somewhat based on my own personal experiences this year.  I experienced a lot of big life changes early in the year and coinciding with that upheaval, a friend gave me a houseplant. Growing up, my family always kept plants--mostly practical ones like aloe in the kitchen for burns, and small veggies like tomatoes and peppers--but I didn't consider myself to be a "plant person."

It just so happens that the plant my friend gave me was a Stromanthe triostar in somewhat rough shape. When I looked up care information online, every guide for this baby was prefaced with "Not for beginners!" Ah.  So this is plants: hard mode. Unfortunately, after a period of doing pretty well, my first Stromanthe fell to BUGS. I now have another one who is doing much more fabulously, and they are joined by more leafy friends in a bright corner of my living room.

In a time of sudden transition, of uncertainty and frustration, caring for another living thing gave me a small sense of direction and purpose. Through my routine of nurturing plants, I am also able to reflect upon how I've been taking care of myself--or sometimes neglecting to-- and become inspired for the ways in which I can change and grow, just like how I get excited when a new leaf or bud starts to sprout.

I hope this is a feeling that I've conveyed in this game!

Loved this game and all the characters. My emotions are all PUNCHED. I just want them to be happy T_T!

Are you thinking about continuing their stories at all?

Oh actually I guess maybe I got it? I have a "Memory of Perfection" in my memories.

Thank you so much! My goal is to finish this as a complete game by the end of the year. Honey and orange congee sounds amazing!

Thank you so much! I'm looking forward to continue working on it. Hope you continue keeping an eye on it!

Thank you so much for playing! I definitely want to finish it!

I love a relaxing plant-care game. This was soothing with a dash of strategy involved, which is right up my alley. It took me a little bit to figure out what I was doing, and what the threshold between keeping my tree healthy and growing was, but I was committed to making a happy tree through to the end!

Thank you so much! I'm definitely going to continue working on it gradually!

Thank you so much! I'm glad you like my art and that it was a soothing experience for you!

This is such a charming take on the puzzle platformer. I love the mechanic of changing seasons to grow plant-platforms!

Ah thank you so much! I'm so glad you enjoyed it. I definitely will keep working on it gradually as I learn more! I have the whole story and paths mapped out so I want to see it through.

Oh thank you! I actually did not realize I didn't have a description in the links lol. I think I fixed it now!

Cute and sweet! Loved the characters and backgrounds. Great job!

Thank you so much! I'm so glad you like games with FOOD FEELINGS too! Your encouragement will power me through!

A couple days away from the Jam end date, and I finally figure out what to share in a Devlog! As you can see, I am very new to this. So hello! My name is Jade. I also go by Lucca. I am a non-binary cartoonist/illustrator whose experience working in games previously was as the lead artist for an indie visual novel developed by Girls Make Games. This is my first game jam, and my first game that I'm making on my own! It's called...

Work in Progress Title Page
What is it?

A Twine adventure that combines text with my background in comics to tell a visual story about congee, memory, and reincarnation. The game is loosely based on the Chinese mythological figure of Meng Po, who brews a tea/soup that causes souls to forget their past life so that they can be ready for reincarnation. My story follows a genderqueer version of the character who operates a congee shop in a train station for spirits. The player character isn't revealed until the ending and changes depending on your choices made in conversation with Meng--whose own hangups are slowly revealed and can lead to a secret ending on a second play-through (we'll see if I actually get to implement this in time). 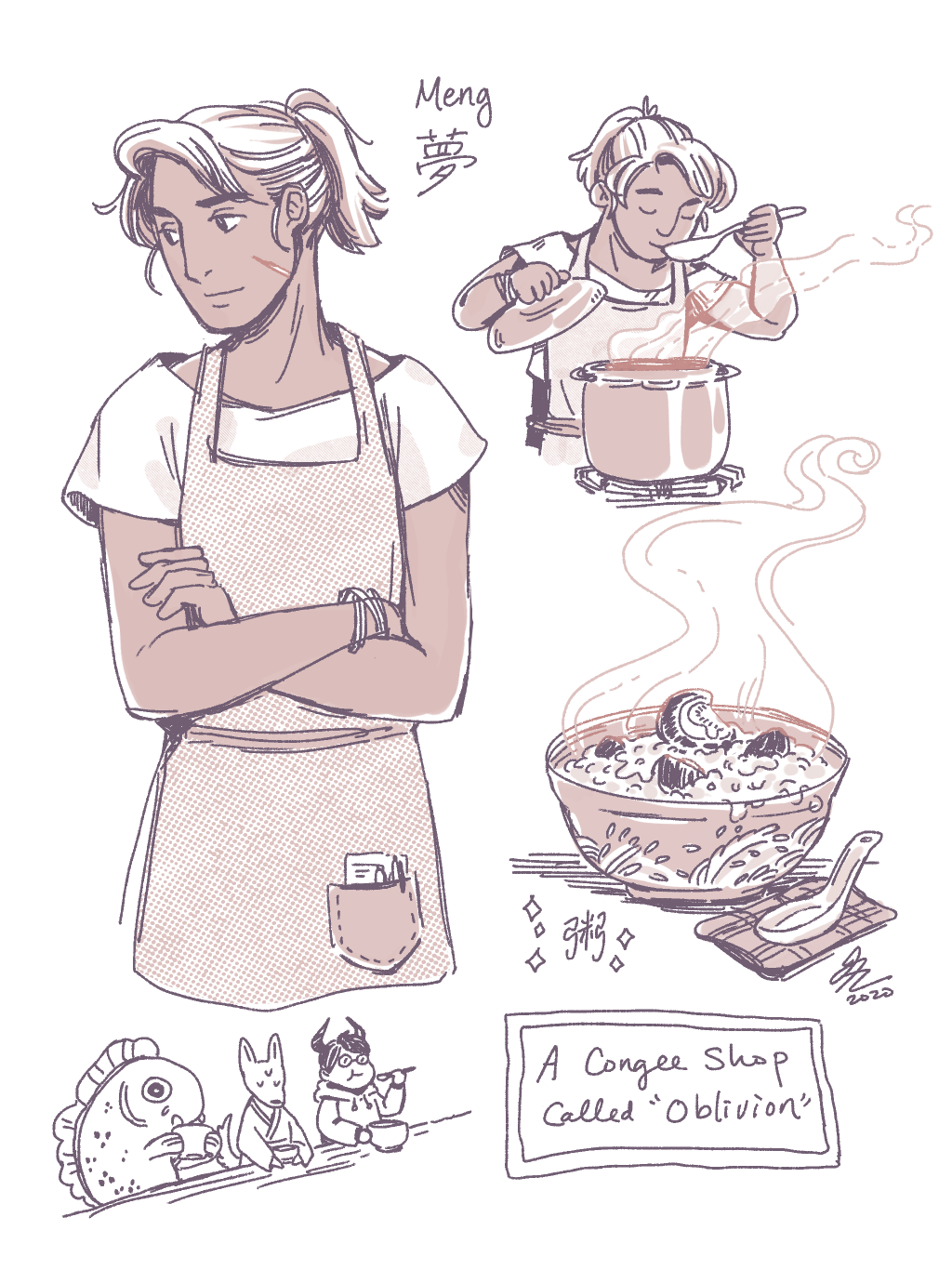 Character sketches
Why congee?
Congee is a food that embodies sense-memories of warmth, comfort, and healing. It's at once simple, yet infinitely variable and creative. Cooking congee doesn't require any intricate skills, but it does demand time and care. I wanted congee to serve as a symbolic vehicle for a painstaking process that evokes strong feelings and memories, but in this story's context, it is made for one diametrically opposite purpose: to forget those attachments entirely.

Liminal Memories:
I want to convey a somewhat pedestrian sense of loss and fading memories as players progress through the game. One method I have explored is in using fade-in and fade-out effects for various segments of text while reading. My intention is to create a visual and symbolic process emulating losing various 'pieces' that end up transforming a 'whole'.

Coming from a cartooning background, I very much approach scenes like a comic page layout. I enjoy the breathing room Twine affords me, but it's been somewhat challenging getting an accurate pulse on pacing. With more time I would love to incorporate some environmental animations in the artwork: dust specks floating in the light, congee steam wafting from the pot, etc. As it stands, I will be fortunate to have a playable full-game with just sketch artwork at the end of the jam! 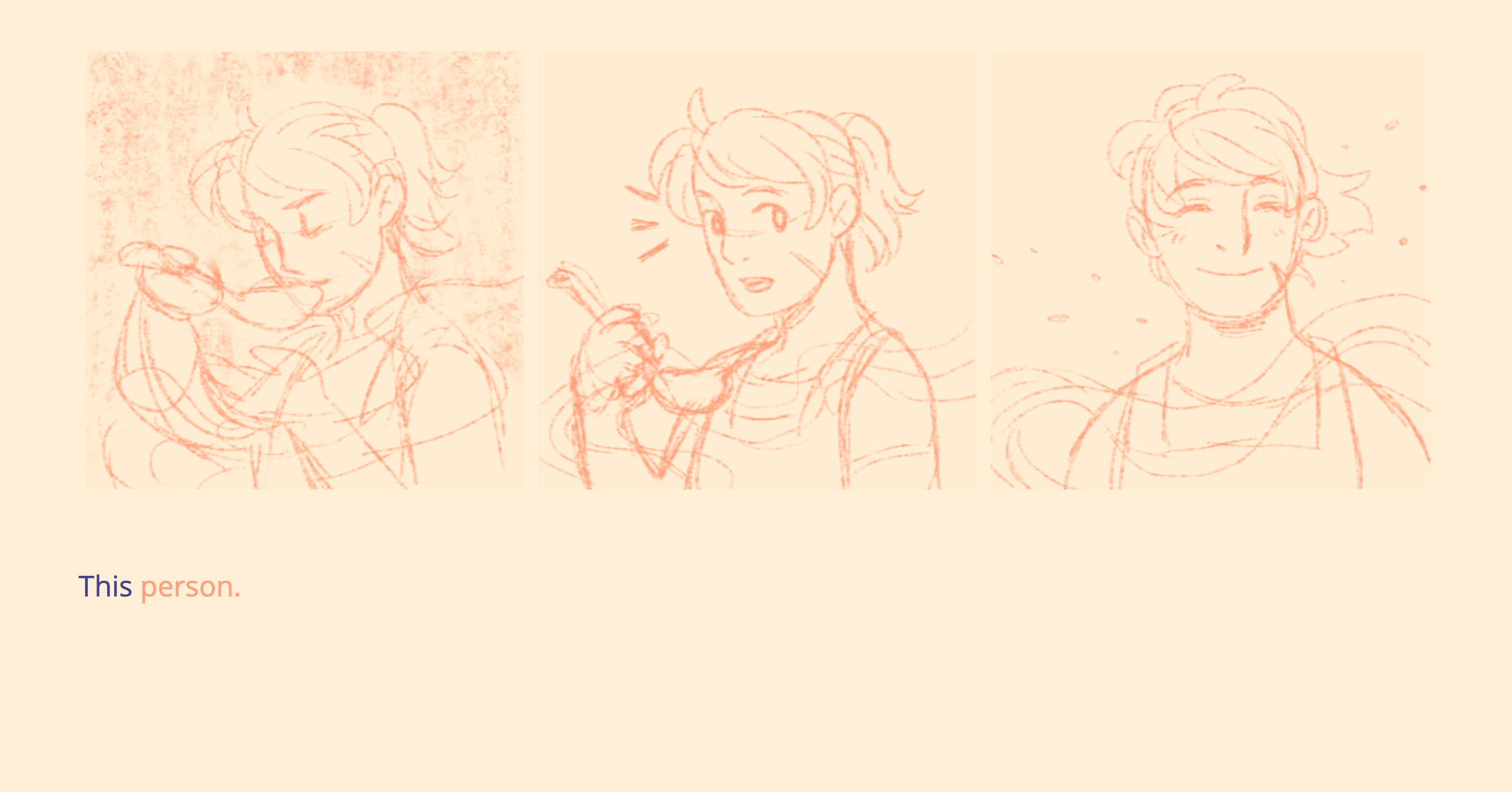