It'd be great to have a toggle for blood effects for my kids to play.  I did use a tool to disable the blood myself, but it also affected the fireworks (blood fireworks, ha ha!).

Very nice!  I found I can avoid encounters by talking to trainers to make them face the wrong way...  but that's a bad idea.

Just a follow-up here. Version 0.5.1 has the new color picker implemented. Double-click on a palette entry to try it out.

I would guess it's a bug in how the distro handles the common API for the color picker. There's a big change incoming that would avoid the problem in Pixel Proof. The next version has a built-in color picker that can grow with the needs of the rest of the program, launches faster, can be persistent, can pick transparency, can copy colors to the palette, etc. I'm not certain when I'll be able to release it, though, since I just started a new job and my schedule is very different now. Since you have an immediate need for it, I might try to wrap it up even if it is missing a couple of things.

I uploaded a new build for 0.5.0 on OSX. Please let me know if you still have this problem!

Thanks for this report! I'll fix it up and post a new build tomorrow.

Reply
Pixel Proof community · Replied to ElLucioVpe in Yey for other platforms!
DinoMage Games5 years ago

Thanks so much. I can't wait 'til animation is in there (which should be very soon according to my list). Then Pixel Proof will be ready for a lot more public attention.

I should also reassure you that zlib1.dll is a very common and easy to find dll. Any trusted source for that dll will be compatible with Pixel Proof in the meantime

Hmm. I would expect libmad to be a soft dependency since I'm not using mp3 decoding at all. Thanks for pointing it out. I'll see what is up.

Thanks for pointing this out! I'll fix my post-build and upload a new installer

Hey all, I'm looking for feedback on my pixel art editor, Pixel Proof. It rethinks editor interfaces and has a bunch of features you won't find anywhere else. The business model is unique, too. Try out the fully-featured Pirate Edition and buy the Honest Edition if you like it or want to support development! 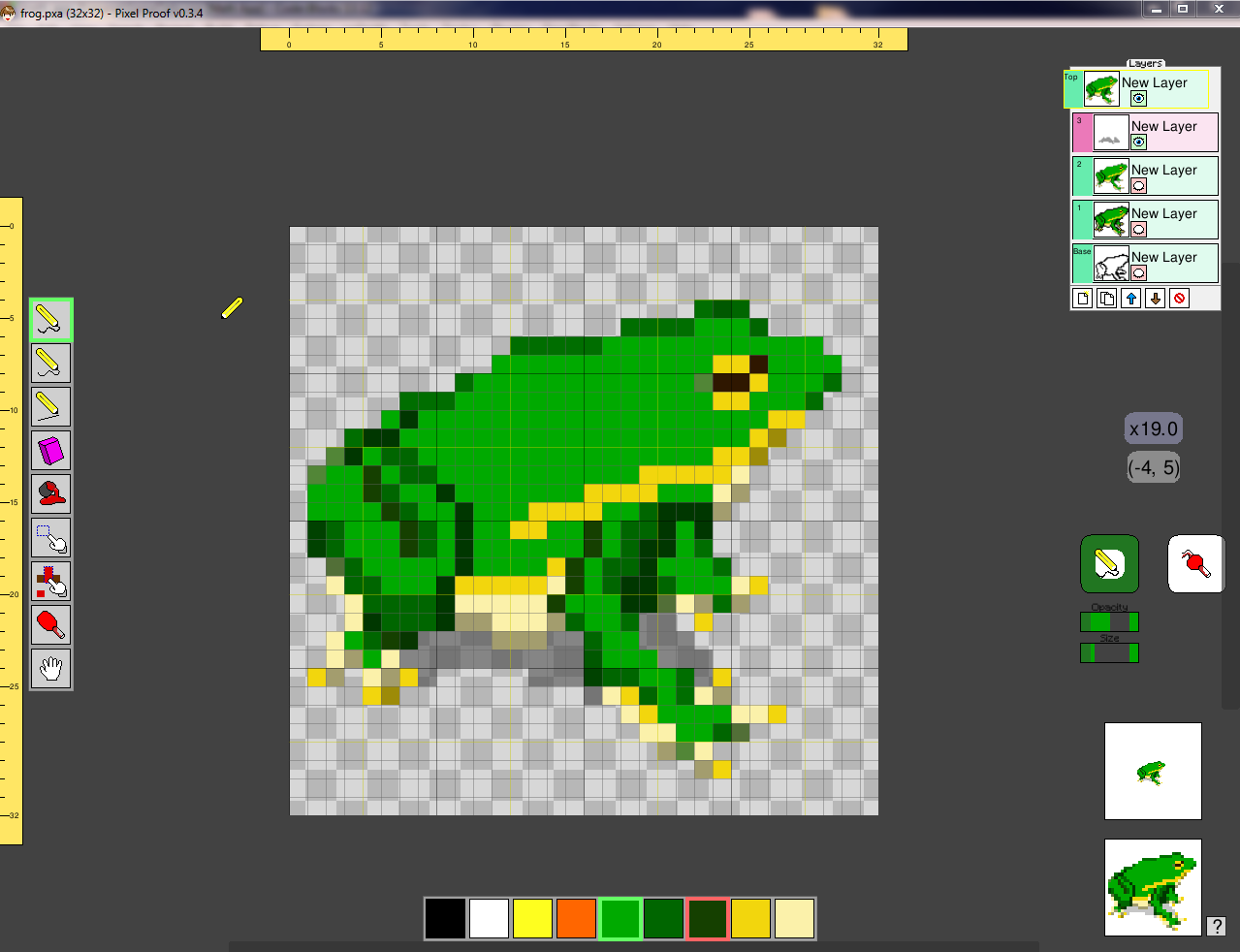 Hey, no problem! I'm still working through your suggestions and adding other features as I go. Twitter integration in version 0.3.3 was a big deal! :)

I just pushed version 0.2.7 and I think you'll appreciate many of the changes.

* Palettes should be much better to work with. They are persistent and have save/load now. You can drag them to reorder and hover to get delete and copy options.

* The tool grouping in the menu has been reworked substantially.

* There's an eyedropper hotkey now. It is bound to the 'I' key, but I'll later be adding keybinding customization so it can then be changed.

* Opacity and brush size sliders appear in the main view now, so there's less need to open the menu repeatedly.

* View mode has been disabled.

Thanks for trying it out. :) People actually using Pixel Proof and describing their experience goes a long way toward making it the best it can be for all of us. I'm glad you found some things to like! Pixel Proof is what happened when I decided I had too many good ideas (read: experimental ideas) for graphics editors that weren't in any other editors. Over the past few months, many of these ideas have been settling down into useful (and less experimental-feeling) interfaces. However, a lot of this app is still pretty rough, with original experiments hanging around without any UI to adjust them (like the scrolling background).

Can you tell me what, specifically, you need to click a lot to achieve? I'd love to fix whatever that is, assuming it's not covered by the other descriptions.

The tool icons will definitely be updated in the future. I actually only recently did a run through them to replace all of the placeholder icons, so these are just 2nd pass programmer art. ;)

It will also help when the menu is revised. I'll be grouping tools together with spatial partitions so you can find things easier. Even bigger than that, though, will be the custom toolbars I have planned. The quick menu will let you populate the toolbars (one for tools, one for palette) and then you'll mostly use those instead of opening the menu.

I just fixed the palette hotkeys '[' and ']' so that the current palette is used. That'll be in the next update.

I recently switched to someone else's dialog library, so I don't think I have control over where the color picker appears. In the near future, though, I'll be implementing an in-app color picker instead (for several reasons), so the positioning won't be a problem.

View Mode is an experiment that might just go away, and any of its bugs with it. The idea was that the app could be used as a lightweight image viewer that could swap to editing at the press of a key (Enter/Return). I'm not certain this would be useful.

I'm still designing the palette management system. Likely, the last palette will persist, you'll be able to save palettes to some palette file and load them again later, palettes may be saved automatically (like GIMP does), and palettes may also be associated with a future editor file format (analogous to .xcf for Pixel Proof-specific needs). Palette editing, too, will be improved, as you can't even delete entries yet.

The only way to currently "move" pixels is to cut and paste them... but that needs work too! I'll add something that makes this process better.

An update on the Linux build:

I had planned to stick to 32-bit Linux for compatibility... but for now I might just post a 64-bit build. My old laptop has a hardware fault that makes it crash often, so I created a new Ubuntu VM on my desktop. However, my CPU doesn't have virtualization support so it runs horribly slow (e.g. mandb takes 10 minutes - really). I had problems with 32-bit builds on 64-bit Linux a while ago, but that'd be worth a try again. Ugh.

This is fantastic feedback, Patrick! Thanks so much! I'll be able to reply in full soon.

Reply
Pixel Proof community · Replied to AntiMatta in Yey for other platforms!
DinoMage Games6 years ago

Yep, the UI is key. I plan to retain a simple feel for it, but improve the flow (more interface exposed outside of the menu). I made all of the icons, so I might have someone replace them in the future. All the other UI things are details that will evolve with the rest and little bugs that will get resolved as I put more time into it.

Reply
Pixel Proof community · Replied to AntiMatta in Yey for other platforms!
DinoMage Games6 years ago

Yeah, I agree. There's a lot of great things about Unity, but there's also something lost in flexibility and maintainability (when you own your structure). I taught a college course in Unity and it was interesting to see how students' coding skills/knowledge and the Unity editor interacted.

The end goal for Pixel Proof is to make good pixel art easy. I'm making tools that other pixel editors can't do, implementing all the basic necessities, and keeping the interface simple. Layers and animation are the biggest features left. A type of index painting is implemented already, but not exposed. Then there are a bunch of interface changes I have planned (toolbars for tools and palette will be next).

Thanks! Support for layers, frames, onion skins, and backdrops are all planned, but not yet implemented. I hope the app is still useful to you in the meantime. My development focus reacts to feedback, so thanks for letting me know what you're looking for!

For Pixel Proof, I use C++ as the programming language. For libraries I use SDL with SDL_gpu (a 2D OpenGL layer). All of the UI is handwritten and some of the paint tools depend on shaders written in GLSL. And, of course, the icons were made in Pixel Proof. ;)

Indeed! The code is perfectly cross-platform (that's how I roll). I just haven't made builds on other platforms yet as the app is still young. I'll have a go at it this week, though my packaging pipeline isn't set up on Linux