Sorry for that! I will provide updates on the standalone PC version soon!

Thank you! A new version with better graphics is coming to the Play Store this year! Will let you know!

It's coming sometime this year to Google's Play Store!

We're expecting to end development this year, and the game will be available in the Android Play Store and here in itch.io  (Windows/Android).

The Android prototype you can get right now is the most recent version, with almost everything already in-game, only the newest graphic assets are yet to be implemented.

You can win by only holding forward and spamming Q.
Nice achievement tho, if MUGEN became way more easy to develop for, I would try to build my own.

Thank you! They were designed by nessm!

Fun little game! Hope you get to do a longer version. It could work great for Android devices as well!

I got 40+ shipments so I think I got it and know how it works. It's good! The fact that it is infinite can be a little bit tiresome. Maybe make it so you have levels?
Anyway, it's nice, but it can get dizzy.

Still, great graphics, a good concept but it was really really hard to keep every group alive, maybe if you were able to give orders to the others or make them spread/unite there would be more gameplay options.

It's a fun one!
Forgot how Crazy Taxi was supposed to be played the first time I started. Then I remembered, but it was still really uncomfortable.

You nailed the concept and the presentation (the music hook was nice), but even with it being out of control, I felt that, like in my game, the concept of loosing control can play against the players comfort.

I liked it nonetheless.

The ending is out of control, but at least there's a way to make it a little less painful.

This is a really fun concept!

A tiny little game that can be played multiple times for a high score is always a good one. If you keep working in this one, it would be nice to have some randomizers so the game isn't predictable after a few plays.

Also I liked how it gets out of control depending on your own performance.

Also I'm curious.. which was your best score during testing?

Thank you so much! Glad you liked it!

The price is just $1 USD. It's more like a tip for me to keep working on games (the game was included in the BLM bundle so there's that as well). You can always keep playing the online demo if you don't want to pay for it. It's fine.

The level design and art style is one of the main things to improve on, and I really want to do that.

Thanks for playing! Glad you liked it!

Yup, I believe it was a hyperbole when Mark said 800MB, but those are his words.

He didn't win yet, it just became a meme.

🐷 #800MB
Prepare to win it just because of that

🐷 #800MB
Prepare to win it just because of that

Thank you so much! Glad you liked it!

I guess you got to the end and then shapeshifted to the gas form, right?  lol

Thanks for playing! We'll add some sort of indication (a clock or a progress bar) for it to be easier.

BTW. How did you beat the last one? Someone told me that you can just jump normally from the second platform on the top left, but it was intended to be a "double jump" by the solid Bloof when you are mini, you hit the platform above with the first jump with your head and then on the air you are able to jump again (that mechanic isn't taught so I'm partially glad it can be defeated in different ways).

We'll do an update the day that the jam ratings end, with that, some audio fix, and new levels.

Glad you liked it,

Hey! Great idea! Personally, I think a little clock on his head, or a depleting bar somewhere would be nice, what do you think? We will upload a new version with some updates, fixes and levels when the jam ends.

Yup! Sometimes you just end up waiting for it, right?  Maybe a complex mechanic would help it to become more interesting for a future update when the jam comes to an end. This is our first platformer and we just learned how hard is to manage the physics, so we ended up a lil' short in time.

Thanks for playing, Dbrad!

We chose the states of Bloof to be the thing "out of control" for the jam theme. Personally, I agree that it would be better to be changed at will. But this was our take for the theme. We thought that "out of control" is a hard theme when it comes to gameplay purposes, since the player actually wants to control the most, but we went that way instead of it just being a part of the narrative.

Thank you!  I will check your game and rate it as well.

Thank you! They were designed by nessm!

Great concept!
However, I think I don't know what to do, exactly. A guy arrives both I don't find a thing to do to keep him there.  Can you give me a hint?

Very interesting and nice concept!
I like the take and shoot, and also like how you can build bigger slimes so they are harder to kill.

Thank you a lot for taking a look at the prototype for Soccer Battle Royale!

We are thinking about map shapes and themes, so thats a thing! A beach theme sounfs fun!

About multiplayer, nothing is impossible, but it will take time. I'm thinking up to 8 players, but that sounds way harder... As you say, that would be perfect!

Thanks a lot for your I added a mobile version for Android (multiplayer there sounds impossible) and you can check it if you can support the project with $1 USD or above.

If not, still I'll take your notes and thoughts. If you can give more feedback, and/or share the game with anyone, I'd appreciate it a lot!

Yes! Once I realized it was safe to do it, I didn't have too much trouble. But if you are playing for the first time it could be a "turn off"

I thought that it was a bad idea to randomize the asteroids since they can appear just in front of you, but I love how when using the hook to that same asteroid that looked like your demise, your spacecraft actually rounds it!

Your game is short and cute.  I love how the high score nature of the game (you never win) mixes with the "at least you tried" phrase, it's really funny.

The gameplay seems okay. You really should add those movement features soon so we can test more. I didn't find any enemies but I think the feel is okay.
The level design is good, it feels exciting to look at things and find others and all that.

The things I think you shold check, are the movement speed (it is a decent speed but it feels slow if you think about a multiplayer shooting game) and the shooting range. I feel like I should be able to aim at higher points.

That's what I can say from this current version. Keep at it! You are doing a good work.

I have a personal question. I want to add a "play in browser" demo for one of my games, but when trying to export to WebGL I got an error.
Did you get any problems while exporting to web? Do you have any suggestion on that?

I hope to see more!

Hello! Without noticing, I've been developing this same idea! But you already have something more polished. Are you okay if I keep working on it? I'm planning to sell the game eventually (my own take would be a little different than this).

We could work together if you want as well. I have some interesting ideas, but I don't know how long I will go, tho.

I liked it! The art style is cute, and the amount of abilities is good (I believe there will be more, right?). Also I can notice that you have polished most of the things that are there, made with care, attention and passion.

There are some things that were a little weird, at least for me.

# The control layout. It's kinda weird to get into it. I suggest you to change from using a row of keys to something like two rows. You know, UIOJKL or something like that instead of FGHJKL. Also, Jump being the spacebar was a little weird as well since you had to change back to the other keys to do things.

# The wall jump. At least in this demo, it doesn't feel that useful. Also, I believe the character gets down really fast, so there's not a lot of time of response. Maybe this gets better if you change the key for jump.

# The cave layout. This is probably just me, but the square-ish approach (I understand) makes the layout feel weird specially in the thinner parts of the cave.

# The camera/view. Specially in the cave. You get to see a lot and since the character is tiny, it feels a little distracting.

I got this error while fighting agains one of the monsters on the cave. I believe I was supposed to die or something but I hope you get to find the issue and fix it. 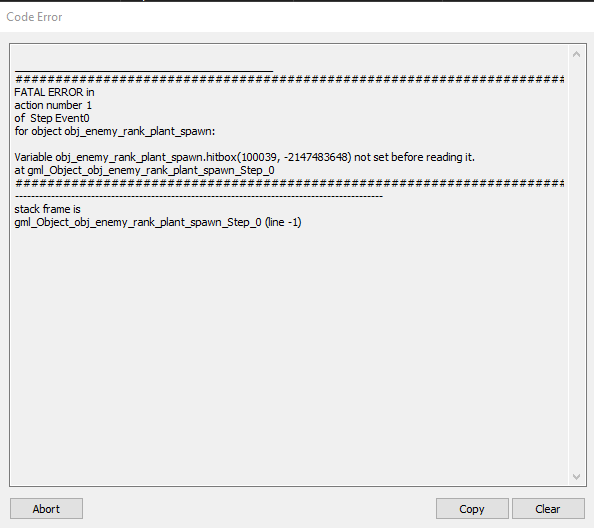 I hope you consider everything I said, and some of those things are just nitpicks or my own point of view. Maybe you chose them in purpose and thats a way to see things, different than mine. You don't have to change them, but if something of those comments help, I'm glad I did.

You said you posted the demo to get feedback about how the game feels. So far, it feels good! But I believe it can feel a little better! I made a prototype for one of my games for the same purpose, but this is way more polished. I feel like I'm already playing the real thing, but I'm glad that we can help you to get other points of view!

Pixel art and the animation are top notch! I love the way the shiba's head gets out there! My girlfriend will love this one.

This made me realize how humans really fail to repeat the same thing the exact same way we did earlier... And that's frightening since computers will not have any hard time to break records on this game!

Brilliant concept! The word "generation" reminds me of machine learning and all those things... It's something like that, right? Because, even if it doesn't make decisions (correct me if I'm wrong) it is reading every move you make!

How many gens there are? Hope you make more games like these!

I liked it! In an intense battle, my mate suicided by trying to protect himself with the blink dodge! We didn't know he was going to fall so it was the funniest thing! Also I loved the eucalyptus blast, it's great and you can dodge it easy so it's balanced.  The only thing we didn't liked that much is that the pace is a little too slow.
Since I made a sumo-ish game as well, I was really into it so I tried it and I think you can do a more complex game without that much of a difficult! Keep going!