These are great! Well done!

there isnt much content after the jail due to a mistake of mine (disabled the enemies in the next area for testing, and forgot to enable them)

Good job for your first jam! The ability to see boar parts before you act would make it feel less of a trial and error. IMHO good puzzles should be completable in 1 go if you think about the solution long enough.

Also, it was unclear to me that you could move back into previous squares. Not sure if that's a bug or intentional...

Oops, I forgot that I disabled that final boss for testing :D (you can enable it by editing the resources/area/catacombs.lua file, just need to remove the -- in front of the battle() call)

Random encounters happened every 5 to 10 steps. (instead of a random chance on each step)  So that cannot be 3-4 steps :D

There are quite some hidden mechanics, the battle order is actually defined by agility, so faster characters attack more often. I thought about visualizing this, but didn't know of a good way. (it works a bit like the ATB timers of Final Fantasy, but then without the waiting for a timer to fill)

And yes, the squid tentacle attack is bugged, it deals 0 or a huge amount of damage. I made a mistake in it's stats, causing negative damage calculations.

The part after the jail I added without any player testing, you're not the only person that missed finding that hint...

My 4 and 2 year old loved this. Constantly guessing what it will become.

I did encounter a small bug, mouse up events are only registering if you let go of the mouse above drawable area, causing drawing to get stuck to "on"

It could use a scoring system on how well you did.

Finally, the music didn't really fit the casual/relaxed style of the game.

Oh, this definitely worked for me. Completed the game. Controls could be a bit tighter for a platformer, feels a bit floaty.

The gravity rotation and time rewind are both fun mechanics. I think you could have left out the 10 health, that would make the time rewind more important.

My 4 year old that was watching wanted to see more levels.

The Art is good.  Music got a bit on my nerves quite quickly.

The graphics are solid. The controls are not documented and a bit weird, took me a while to find the "fire" button (it's the mouse button for people that wonder) which is strange with keyboard movement, unless you have mouse aiming as well.

The concept of starting with the boss and going backwards is good. But with only 3 levels, the execution leaves quite a bit to be desired.

I like the visuals. The animations work well. I like the tigersnake idea and visuals. I really had to "train" myself that you could cross your own tail, but I think that was a very good decision to allow.

I'm not a huge fan of the gameplay. The concept is nice. But I don't really feel "in control". I don't know the range/damage of the towers. So planning the path is sort of a wild guess. The execution phase also quite long, and that's just waiting for the result. And then after the result, it's hard to analyze what I could have done better.

Also, small thing, games that require to switch between keyboard and mouse interaction can be annoying for some people. Works fine for me on my laptop, as the touchpad is close, but with a mouse+keyboard is breaks the flow.

Cool. You are correct that the GBC can set the palette per tile, unlike the NES.

Not sure if you can do palette per scanline tricks on the NES like you can do on the GBC. (I'm more familiar with the GBC hardware)

And you can use layered sprites to get more colors, but due to sprite count limitations that generally isn't super effective. (But Links Awakening DX uses this for Marin's face on a zero death ending, where it has 3 layers to get all the colors in)

Note that strictly speaking, the NES only allows 1x4 color palette for each 2x2 tiles (so 16x16 pixels). So it's not fully NES limited. But still, looks very nice.

These are so cute that I instantly want to make something with it. Well done!

I love these, as well as your others. Great work.

Note, multiple people report serious issues with the camera, I have a version without the camera movement uploaded here:

It's otherwise exactly the same, just with a static camera position.

Using this to see if I can create a gameboy game, the 16x16 works really well for that. Really cool pack! Thanks!

Well, the obstacles loop into the same pattern pretty quick. I had ideas for a few more obstacles, but due to conditions at home I lost a day. So I had a bit of a rush to finish anything at all.

Not sure why it crashes on credits, that's just my default template... but other then the music, it's just a lot of code library credits.

It is easy jam, so simple is good. I also tried to keep it fully playable in 10-20 minutes.

Web build available at: http://daid.eu/dump/PaperChallange.html
There was a bug in my engine preventing it to work at the time of upload. Game is 100% same as in the downloadable versions.

Source code of the game can be found here: https://github.com/daid/PaperChallange/blob/master/src/mainScene.cpp in case anyone cares.

simulating the fade effect of the lcd is allowed.

Reply
NOKIA 3310 JAM 2 community · Posted in Can the resolution be equivalent to 84x48?
daid2 years ago

as long as the objects stay on a 10 pixel increment then. Yes

Lovers in a Dangerous Spacetime: Bit on the edge, as every player can do the same. But only 1 thing at a time.

Thanks. I managed to surprise myself as well with the amount of work done in a week. I did work really hard on it, and pulled a lot of shortcuts to get it to work.

But I am planning an update on this game post-jam, just fixing and adding a few things that I didn't get done in the week or that reviews noticed. I however, have no talent for art, so nothing not much I will do there.

Also thanks for your offer. I can also turn it around, if you ever have art that you want to be turned into a game, but not capable/willing of programming it yourself, let me know. Just as long as you remember that this is a hobby for me, so I have time when I have time.

I'm also on steam https://steamcommunity.com/id/daid and can be reached by email via daid303@gmail.com

But you can pick this up without my approval or anything. The windows download contains all assets exposed.  Also don't worry about multiple people doing the same game.

Be sure to grab&read the manual on the itch.io page!

I hope so. As my game looks like this: 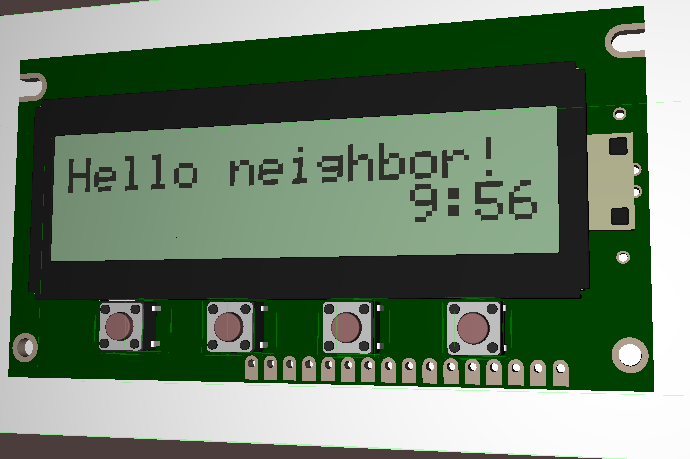 (Yes, I actually am using a 3D model of the 16x2 character display)

Ok. Got it. Think my plan complies with the rules.

Can my game have a manual next to the 16x2 display?

What kind of input types are allowed? Mouse/keyboard/gamepad?

Can I have multiple 16x2 displays "open"/"active" at the same time?

Maybe for next time, 16x2 is really really small. These types of displays also come in sizes 20x2, 20x4 and 40x4 characters. And there are also 128x32 / 128x64 OLED pixel displays that could have the same look. Giving more options might attract more people.

Reply
16x2 Character Jam community · Posted in what counts as a "character"?
daid2 years ago

I read this now as: Just make it appear like the LCD, do not set yourself to the strict limits of this LCD. (Bit like shovel knight looks like a NES game, but doesn't do any of the actual limitations)

Reply
16x2 Character Jam community · Posted in what counts as a "character"?
daid2 years ago

However, a few different character sets exist for those. Example https://arduino.stackexchange.com/questions/46828/how-to-show-the-%C2%BA-charact...

And they allow up to 8 custom characters to be displayed at a time.

I like that itch allows hosting of a lot of jams. But I really do not care for jams that run for more then 2 weeks.

So it would be nice if we could filter the jams on length. As some jams run for months, and some even a whole year. Really cluttering up the list. (Some might argue that these long are not really jams. But that is a difficult question)

It would also be nice if the calender view could be filtered.

There you go. It's all build on top of my own custom game engine, but it should be reasonable easy to follow.

Sounds like I forgot to subtract one from the available bodies if you place one. I thought I noticed that from Joshua's stream as well.

If you want to make something like this, I can share you the code. It's C++, and it's not all well written. But it's not horrible to read/understand.

Maybe I'll revisit the implementation a bit later. But I don't have huge plans for it.

I'm surprised you played it longer then 10 minutes. It really wasn't intended to be played for this long :-) But let me comment on a few of the suggestions:

And as a final word. When you got greedy and wiped out. You where the dragon, you where slain. Ha, how is that for deception? :D

Could use some more explication. But working sounds into a core mechanic is a fun concept. Does need some work tough.

Took me a while to finish it. Also talked to you on discord, but for completeness, leaving a post here as well.

Started off nice, got a bit frustrated in the middle, and then finished with an "aha". So on average, not that bad :-)

Before playing, just checking the manual:

Oh this is great. Its dungeon exploring and "keep talking and nobody explodes" combined!

Still great. Quite hard, but fun. Well done. Did notice that it didn't always properly pick up my key strokes. And couldn't scroll back, which is problematic if you need info that was scrolled out of view due to bad text entries.

The gameplay is a bit boring for me. The graphics make good use of the ascii art. Really like the fireballs. Didn't defeat the boss, mainly due to not being able to pause and kid needed attention.

It's not the best game in the jam. But not the worst as well.

I think you are a beginner developer, as you uploaded your whole project directory. Just the contents of the "Win32" folder should have worked. But now I see your code as well.

Never give up, just keep improving!

To be honest. I have no idea what's going on in this game. Or how it even plays...

"You're such a horrible being, be ashamed."

Very well done. I really like the colored ascii art. Ran into a minor bug, the dungeon master was called something else during the fight.

Getting dice rolls and then picking how to use them on different skills works surprisingly well as a mechanic. Fun little game :-)

The iframe on the itch page may be a big bigger however, that's something that could be improved.