Between The Skies has officially become my son's favorite game. We're playing it all the time. The thematic blend is just enchanting him top to bottom.

Bendu had 3 HP remaining, so the result of 3 (highest among 1, 1, and 3 as all are rolled together and take the highest to "gang up" on him) applies to him. 3 HP with 3 damage = 0 HP, so we roll on the impact table given the blow. The "he's safe" aspect refers to him absorbing all incoming damage to his HP, as anything beyond that would go to his STR score, which would trigger a critical damage save. Failing that, he'd be down for the count until rescued.

In short, any time your HP is reduced to exactly 0 from a damaging attack, you roll for the impact.

Sincerely one of my favorites!

No metajoke has ever been so elegant.

This is exactly what modular procedures should look like. Excellent advice and tools within.

The intent there is that your initial descriptors may change based on term results. In the future refined version of this game, stats will sincerely be removed entirely and this will be cleaned up.

Thank you very much for your kind words!

Yes, a physical print edition is planned but the timing is Soon™. I hope to clean it up, expand it a bit, and have it ready for booklet format at some point.

Jacob, thanks for noting that. I’ve spotted a few little bits like that after many passes and I’ll revise the document when I set it up for print.

Yes. Any tags, descriptors, items, or other "modifiers" should simply be leveraged as they make sense in the context of what's happening and what's reasonable.

As a bolded term, it refers to the "NPC Bonuses" table in the back of the document. Consider it either that bonus applied to the player character, or that player character having a reliable NPC connection with the bonus.

the copy is verbose and the maps are all in the back, but those are my only quibbles as the content is absolutely fantastic.

Arden Vul could be a little easier to read in terms of information, but the locale and flavor is off the charts. It’s incredible.

Thank you! I have many plans for expanding Weird North in 2021+.

More tables are planned, to be sure. I may put together more archetypes at some point. What would you like to see, concept-wise?

Happy to hear it! I am currently working on the first of many adventure modules while I weather the large delays in DTRPG POD progress. Expect more to come in 2021, to be sure!

Thanks for the kind words! Useability was my primary goal. Keep it fast and simple.

The Doomsayer is quite narrative. It's up to the discretion of the table and the context. The intent is to lean into the self-fulfilling prophecy concept and especially when used alongside elaborate plans or dire intimidation.

Absolutely! Thank you for including Weird North.

Great take on dice pools. That's a mechanic often overwrought and too clunky for it's own aims. This is solid.

that would be fantastic 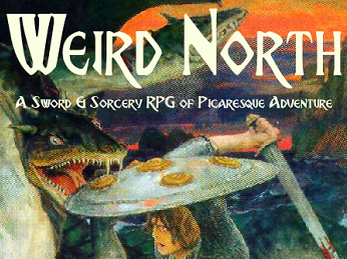 WEIRD NORTH is a role-playing game for one referee and a handful of players. Players take control of wandering sellswords and adventurers, exploring a huge and curious world in order to claim great wealth, expand their renown, and achieve personal goals.

The game is modeled from Chris McDowall's Into the Odd and Electric Bastionland, but heavily flavored with pulp fantasy, serpent magic, corrupting sorcery, various Trees of Woe, and more. Fatigue and corruption are key changes from the original game, and make expeditions into the unknown exceptionally dangerous and exciting.

I'd forgotten to add this, but as of today, Community Copies are live! Thanks again for the head's up.

To this day there is no better family of space trading adventure games!

I admit I am quite new to itch. I am unsure how to provide those, but I would like to.

Thanks for this! As someone who is a formatting dunce, this is a valuable resource.

Any Planet Is Earth is a set of sandbox guidelines for creating a near/far future adventure campaign. With an emphasis on realism, lateral thinking, and simple rules, players will seek jobs, bounties, trade, and rumors, accept death, and try to leave their mark on the starscape which naturally emerges from details, dilemmas, and decisions. The game takes its inspiration from Marc Miller's Classic Traveller, Chris McDowall's Into the Odd, and Ambrosia Software's Escape Velocity series.

At only six pages, the game zeroes in on focused tools to help both players and referee indulge and expand upon the context of the game world and twenty-three 36-result tables to generate NPCs, worlds, crises, trade goods, conspiracies, and myriad other decision points. The game features four pages of rules, including character creation across military, expeditionary, and mercantile career paths, conflict, trade, starships, interstellar travel, and referee resources, as well as two full pages of random tables for quick and interesting content creation.

The game itself is played simply with 2d6 rolls for players, but the emphasis on critical thinking and leveraging the game environment at any given time pushes the players and referee both to lean into the context of the game world and treat it like a real place. Description first, abstraction second. Everyone at the table drives forward to promote emergent narrative and unexpected twists.

In addition to the rules download you'll also get a single-page spread including a character creation walkthrough, example pregen characters, and example pregen starships and crew loadouts.