Isokan is a top-down twin-stick shooter where your ammo is directly tied to your health. Enemies are spawned in close to the player and depending on how many enemies are defeated the time it takes to spawn an enemy decreases (they spawn sooner, hope I explained this well).

I wanted gameplay that would overwhelm the player a bit and force them to find ways out of a tough situation while managing their HP. Having never made a game of this genre before I took a few ideas of what to do from Nuclear Throne and Gungeon (except for screenshake because I personally didn’t feel it necessary for the game).

As mentioned before, the player can shoot an energy bullet that depletes their HP. Players who spray/shoot recklessly will eventually die if they don't take the time to aim carefully. Each level is also impossible to beat with your initial health pool, so players must find the time/space to recover properly.

To heal, the player is forced to stand still and hold a button to gradually replenish their HP at a fixed rate over time. What stops the player from just holding this button would be new enemies spawning close to them while enemies not yet killed make their way closer to the player creating a complicated situation.

The only way to safely heal for a short amount of time would be to make space and take what you can get before having to confront more enemies or continue to run for safety. The issue with the latter part is that enemies will keep spawning and taking up more space from the player to run to. I realized about 2/3rds into development that the gameplay encourages being very aggressive and created a few achievements to nudge the player in that direction.

The dash works by moving and pressing the same button that triggers the healing. The player becomes invulnerable while increasing their move speed for a limited amount of time. What stops the player from holding the dash button down is that dashing in one go for too long can cause them to take damage AND slow them down for a short period. Every time the player dashes there is a cooldown before they can do it again based on how long they were dashing previously.

To fit the design principles I wanted to follow, I needed the enemies to force the player to not stay in the same spot and slowly- by spawning in said enemies close to the player- overwhelm them if they aren't playing "skillfully".

There are 4 enemies the player will encounter in the game (excluding the boss):

Based on the playtesting so far it seems like things are going well, but I’m still unsure about the teleporting enemy. The enemy has so far confused 2/12 or so playtesters due to the nature of them summoning a blackhole of sorts and teleporting (perhaps it’s too much all at once).

The game releases next week for free and playable in browser. Hopefully the game is fun and without any bugs I haven’t caught. If there's any questions or things to talk about design wise from this post just let me know. If you want to play the game now (functionality is all there, just need final assets for Achievements and some lighting effects), feel free to DM me and I'll send the private link and password.

This had a lot of fun ideas and made me think a few times! Definitely like the idea of using multiple core abilities to move around. Only complaint is that I wasn't always sure of which core I was activating lol

Edit*: I take it back. It's dastardly

Hey thanks for playing! If you're interested in following more of the game's progress, check us out on Twitter :D

The platforming challenges were nice. Definitely feels like HK inspired (not a bad thing!).

My only issue is that the thorns/spikes hitbox might be a bit too large. Decreasing the size might make for a more fair experience.

The dash is interesting because you're letting the player fall while dashing (whereas in games with dashing it usually "locks" the player's y velocity). Intentional or not, it was interesting to consider while moving through the world.

I like the character art as well. Good luck on your next game!

Hey thank you!! Do you remember how often you died? Also, if you have any feedback negative/positive I'd like to hear it 😃

Hey everyone, recently published Path Finder, an atmospheric puzzle-platformer that becomes progressively more difficult. Please feel free to leave any feedback good/bad, I'll hold on to them when developing the next game! 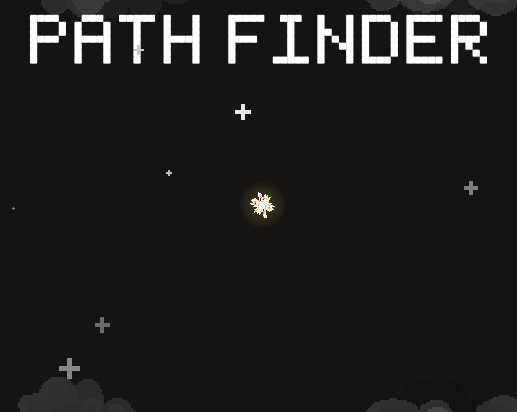