Best place to go is Twitter and use the hashtage #WreckThisDeckRPG!

We'd love to hear about your exploits! Share below!

This is a Q&A thread for anyone needing help with the rules of the game (or anything else related to MMIB!)

Do get in touch if you have questions about the game!

MMIB was funded by the generous support of the Black Armada Patreon.

MMIB uses cards to fuel your creativity. Each game you get some prompts which you can draw on to shape the kind of story you'll tell. They're different every time, but evoke the weird, madcap romps of television SF.

The game comes with a print file so you can play physically, but also a file you can upload to playingcards.io in order to play virtually.

Unlike many other -esque games, there are several central characters: the Traveller, of course, but also their Companions. The Companions are there to ask stupid questions and get into trouble, making life more interesting for the Traveller. You can also follow the Companions when they go off on their own adventures.

The Traveller and their Companions are each interesting, quirky individuals who are great fun to play!

MMIB is a GMless mystery game, like Lovecraftesque. When the game starts you'll arrive on a new planet, or a new historical period, and begin populating it with intriguing details. Each turn one of you will play the Nemesis, bringing in Lore that will later be woven together into a villainous plot! Between scenes you each privately leap to conclusions about what the Lore so far might mean, and who the villain is - then use that to guide your contributions when you take your turn as Nemesis.

I've just published Madman In A Box to itch. Here's some interesting stuff about the game.

Thank you so much for you lovely comments :)

Thanks for your thoughts!

This is a really beautifully presented and well-written game, highly evocative of the genre. It looks mechanically innovative and well-designed as well. A triumph!

How long do you need? The end date was pretty arbitrary, so I don't mind a short extension.

@J Walton not worried at all! I really want to see multiple people building on the same seed, I feel like that's what it's all about (hence the jam title). Our concepts are wildly different, for what it's worth. :)

Come to think of it, order by most recently submitted and you'll get mostly the stage 2 entries. There's one stage 1 entry came in late, but the rest I think are all neatly segregated by the stage 1 deadline date.

Stage 2-wise I'm (Josh) working on a game based on the very-popular Other Worlds and Road Goes Ever On, with a dash of Bury Me In Starlight. Will be interesting to see how our entries compare @J Walton!

You can tell when you click on them, it's right at the bottom of each entry. But annoyingly there doesn't seem to be any way to make this visible in the list of submissions.

Hmm, maybe? The effect of that licence seems to be to prevent the person building on the game from selling it exclusively - since anyone who buys it is then entitled to distribute it for free.

I guess it's ok on the grounds that (a) people share RPG PDFs all the time anyway, and people can generally be trusted to pay for them; and (b) if anyone finds it off-putting they can always choose not to use this particular seed.

Reply
Folk-Horror Game Jam community · Replied to Groundhoggoth in How much setting detail do people like in their Indie TTRPGs?
Black Armada Games1 year ago

that is broadly my thinking - but then other people love all the maps and setting detail so I'm never sure :

I love some Hypoxia when I'm writing the creepy games -

I've just submitted an old game of mine to this jam.  I love it and I'm very happy with it - but I don't think I've ever perfectly cracked the big design problem of epistolary games (the big problem to me anyway!).  That is how do you get people to sustain writing.  The longest epistolary game I was in lasted about 5-6 months (and it was the game I've submitted).  But almost all letter writing games seem to fizzle as people lose focus or can't find the time.  Once the fizzle has set in, once a letter has been missed - it seems almost impossible to reignite it.

How do people tackle the whole - sustaining momentum issue?

I might write another letter writing game for this jam, or just generally.  Because I love the idea of them, I love the tactile artefact of the physical letter... but I just wish they were more reliable.

Reply
Folk-Horror Game Jam community · Created a new topic How much setting detail do people like in their Indie TTRPGs?
Black Armada Games1 year ago

I've written a first draft of my game, but I always struggle to put in setting detail because I assume people would rather make up their own using some prompts.  But I'm slowly realising that might not be true.   For something like Folk Horror which is a really strong genre - do people want lots of setting detail do you think?

Thanks for the question! The intent was that it should be 500 words or less, but TBH I don't think anyone is going to sweat it if it's over by a little bit.

We'd love it if you added our game Year After Year.

I know you already know this, @Stone River Games, but in case anyone else looks here - the thing to do is for one person to create the project and add the others as collaborators. Then it will show in everyone's sales page.

What this won't do is split the revenue, which annoyingly has to be done manually. We've said we'll just not worry about it unless we get more than, like, $10 a month.

Year After Year is a tabletop RPG about an ordinary family living through tumultuous change. We follow their trials and tribulations as the years roll by, with political, technological and social upheaval rocking their world.

YaY is a fairly freeform game, using a simple structure to enable you to generate exciting imagined futures, beginning with the near-future and rolling forward into strange times indeed. The game keeps a focus on the family, their drama and relationships, but getting them caught up in the relentless change that is the theme of the game. 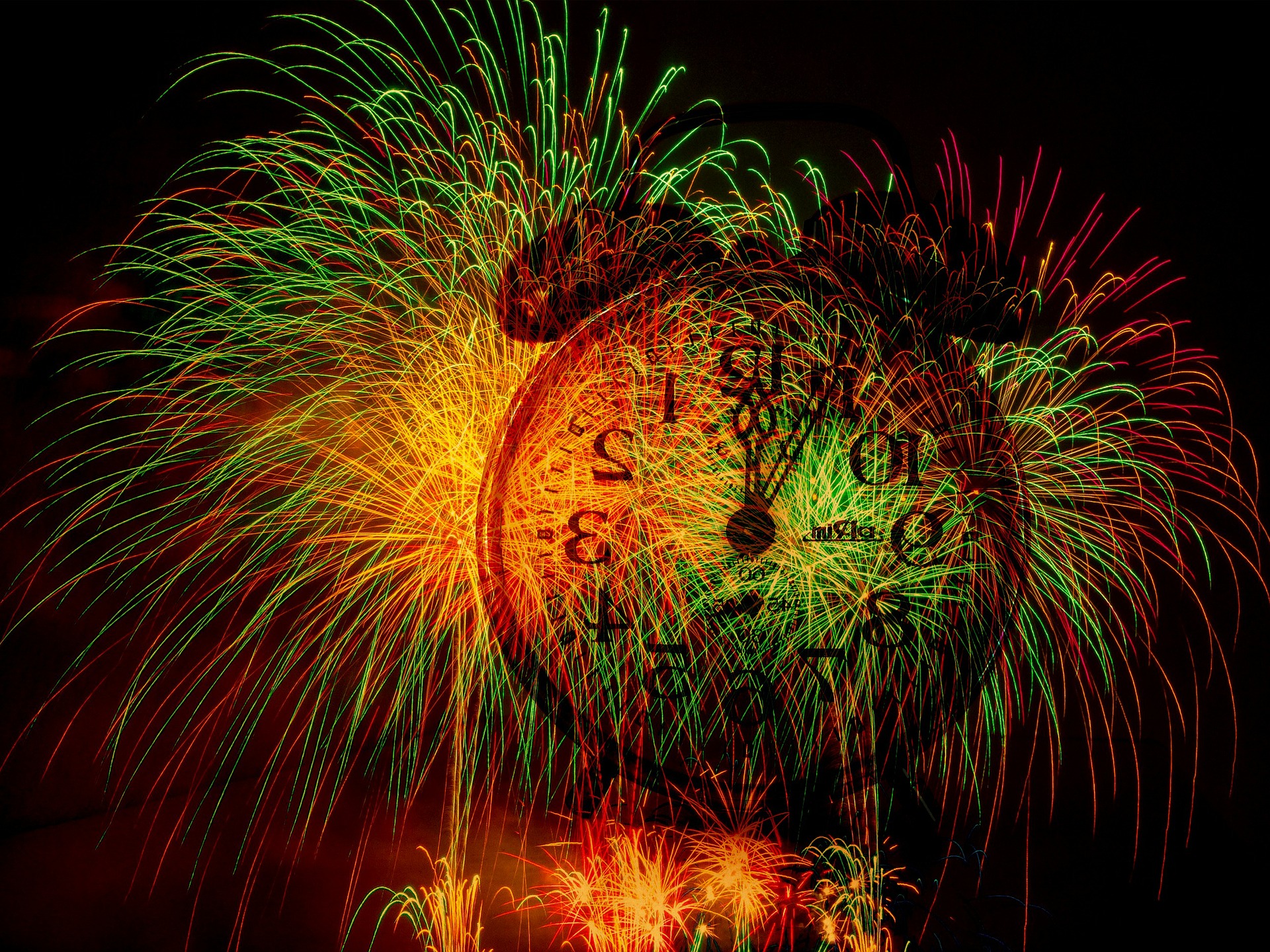 Yay! Looking forward to it.

Thanks for replying. Your 200 word game looks great - I like political stuff.

I think The Quiet Year has some similar themes to Legacy, so maybe we could do that?

No idea how best to get started with this... email convo maybe? I'm josh (at) vapourspace (dot) net.

Should have said I'm UK-based! Time-zone sync would probably be an advantage, though not essential.

Cool cool. Not sure where to look, but will have a poke around.

I'm Josh Fox. I probably need to create my own account instead of using the Black Armada one.

I'd be interested in responding to Legacy: Life Among the Ruins or Hollowpoint (is it ok that these isn't an itch game?), or better yet something you suggest.

If you're still looking for a co-designer, I'd be up for it.

Would be very happy to work with you on one of the things you listed, or will post a proper intro below with my own suggestions. :)

What the Water Gave Me was originally funded through the Black Armada patreon in July 2019. If you liked it, consider supporting us - you'll be helping us to make more great games, and you'll get access to games like this when they're first created.

What the Water Gave Me by Becky Annison is a diceless, GMless tabletop roleplaying game for 3-5 players.  It is set in two time periods the English 17th Century and the modern day. In this game you  weave a story of tragedy and death between the the two time periods connected by a dark and sinister, cursed millpool.  This is a story of tense drama and relationships with lots of support for improvisation and advice on how to frame scenes.

At the end of the game you will have a deck of cards with some key words and names scribbled on a few cards.  This is your artifact to keep and reuse in future games just as the millpool collects is victims.

Play will take around 3-4 hours and you'll need some paper and pens and a deck of playing cards with the Jokers removed.

Content warning: this is a game with themes of death, drowning and suicide. 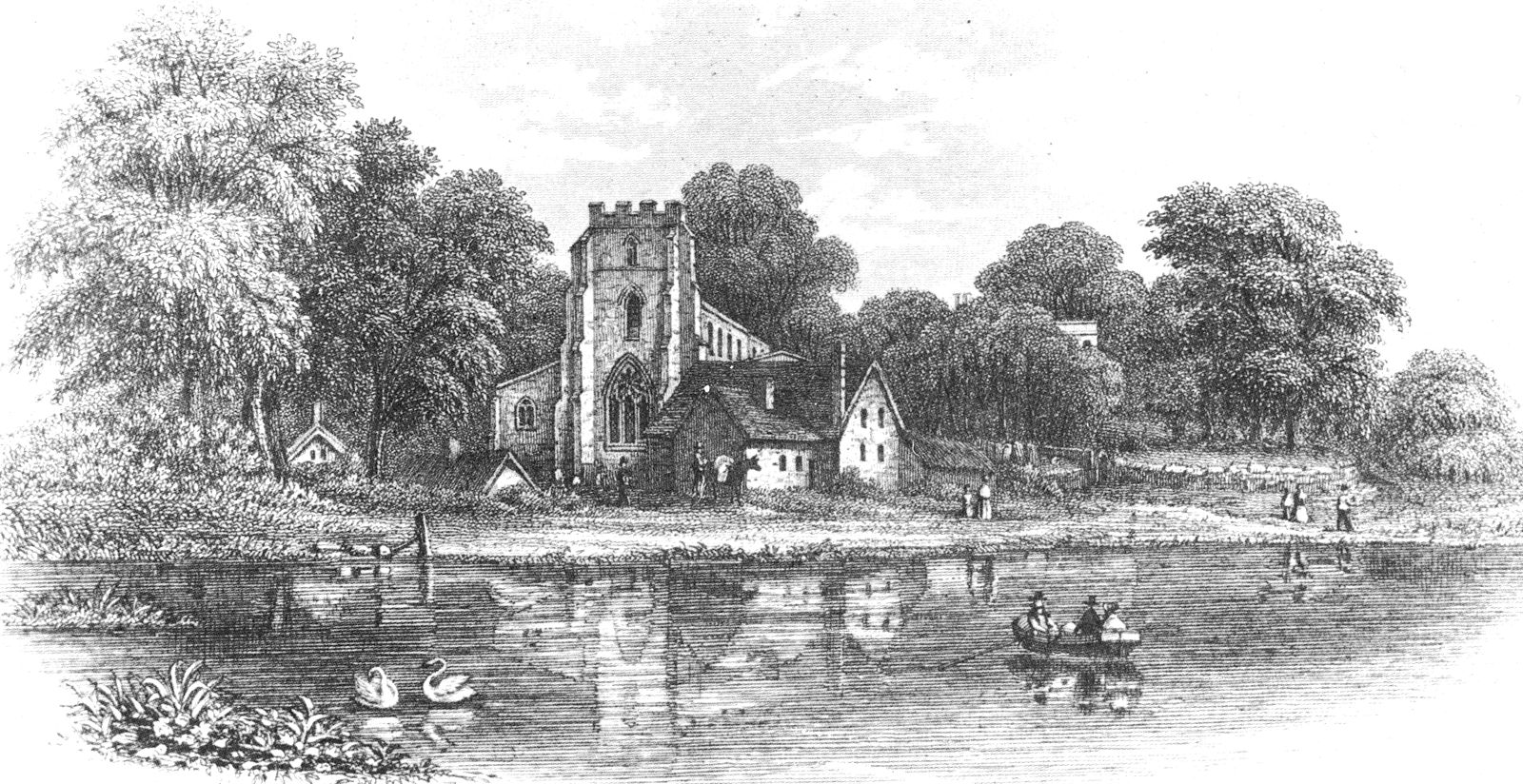 Yay! I'm excited about it - I can't get to US conventions so it's wonderful to hear about it being run there :)

Soap Bubble is a tabletop roleplaying game where you create your own TV soap opera. You play the characters in your TV show, and the actors who play them. You switch back and forth between the characters and their actors, playing through the drama in their lives. You also get to mess around with interesting audience-level stuff and share collective ownership of the Director who runs the show.

Soap Bubble is PWYW, but if you like it you might also want to check out the Black Armada patreon (patreon.com/blackarmada) as that's where we're developing our short RPGs. 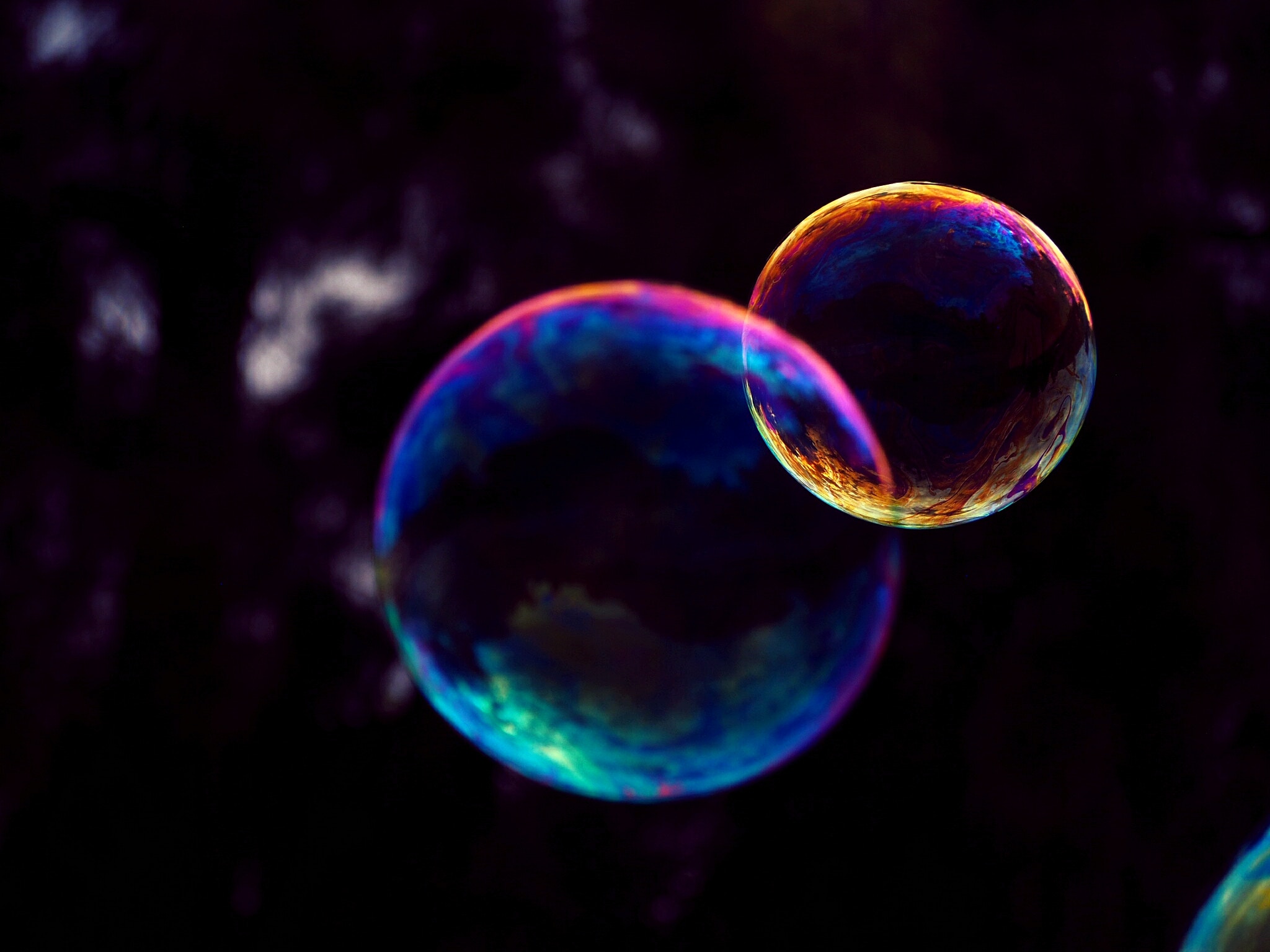 Flotsam: Adrift Amongst the Stars is a tabletop roleplaying game about outcasts, renegades and misfits living in the belly of a space station, in the shadow of a more prosperous society.

You each play a character living on the space station, and you'll explore their relationships and the drama in their lives. You also control a single situation which you'll use to create problems for the characters to contend with.

A simple token-based mechanic is used to decide who gets what they want, and who gets deeper into trouble. And the system rewards exploring and developing your personal relationships and weaknesses. You watch your character change over time.

Characters you can play in Flotsam include: 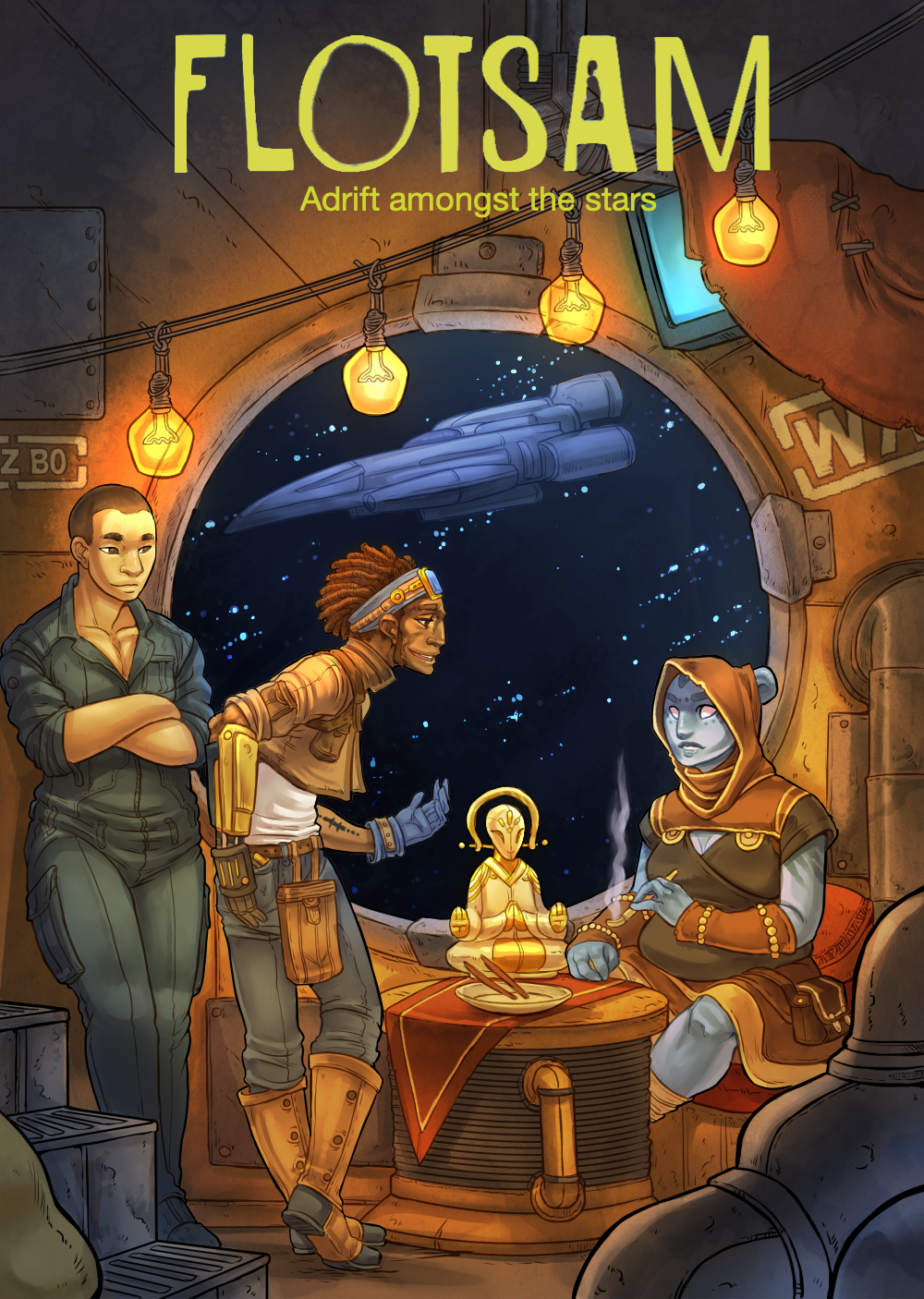