This game is fun, the online is kind of unbalanced, but it's nice, love the art and the music, good luck!

Amazing game, the story was very entertraining, visuals were perfect and so was the music, also the ending was very wholesome. 9/10

I didn't know that it was a bonus! It's a very nice reward I will gladly take it, congratz for both you and Gubbles for the game! Never heard of Lucah, I will take a look into it since it interested me a lot, you should try getting to the end of Crosscode it's a hidden gem as well

Pretty good game, the opening and the rest of the game difference was a little awkard but with a limited time it's understandable and the visuals were great regardless, the universe was kind of nice and fun in some ways, and the end was very wholesome. As others said, Reisen seems like a long scene, but is actually important to the climax of the game. 9/10 It's worth mentioning the music was comfy and very good (even if the bar music is stuck on my head now haha)

Game is amazing, reminds me a lot of Crosscode in many ways, music is entertaining and uses the theme in a very cute way, 10/10

Just finished it in Lunatic, it's an amazing game, very cute and stylish graphics, the dialogues are fun and gay (as they are supposed to be), gameplay is the best part, I may be wrong on this, but was this inspired by Crosscode? Sanae attacks were very similar to Crosscode and Utush0 3-jump attack was very similar to The Designer attack from Crosscode as well.
The story was kind of confusing but in a Touhou way, you know smug Reimu and all that things and with some mysteries left to be solved.
Only thing that felt lacking was a reward for playing Lunatic but I can't complain that to a Jam game. 10/10 would pay for a bigger version of this game 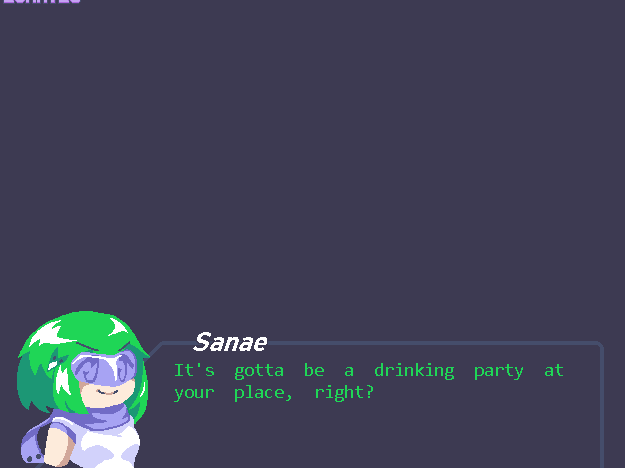 Going to release a new version with these problem fixed and two other unrelated problems!

Thanks for the feeback! We are aware of the issue but when we put the sprite in we didn't have much time left, perhaps different outlines would make way easier to see the difference. Also the "tutorial popup" was very rushed as well so there is that. We will work on a fix if we work on it again!

I'm glad you liked it, it was just a little game to test my "skills" in making games, I plan to make bigger games in the future so I'm glad you liked it.
Oh, and the graphics are all by nyutamoto, you should check their twitter or tumblr page, they are awesome!

Not sure if there is an end to the battle, but the Hot...Cold concept is cool

Wasn't expecting it to be that good, but it's awesome and should be more popular, great job!

Cool game, I'm just too dumb for it

Just finished the game in the hardest mode, gotta say it's worth, great game please keep on!

I like the concept, it should have an option to save your character though!

The game is cool, but fairies are too op pls nerf (jk)

Is it a new update or is it the same as it was in the last Jam?

This is amazing! Nice jo