I have previous builds which have zoom as well as landscape orientation.  I thought it best to target mobile so that is why I went with portrait.  All the work I did to try to appeal to the mobile market isn't really working (I don't have the time or resources to do much to push it forward), so eventually I plan on releasing a build that is more tailored more towards the pc market.  I'll be sure to let you know when I get that out and I'll upload the build here.  Looking back, I probably could have done better with a much earlier build that didn't try so hard.  Thanks for playing and for the feedback.

Thanks for letting me know about this.  I have an older mac and can't upgrade to Catalina currently to try it out.  I'll try to get this straightened out and provide instructions or a new build.

Hello everyone!  I work at a Water Research Laboratory and when learning about one of the algorithms we use to derive watersheds from elevation maps inspired me to make a game.  I've been working on this for just over a year now and I'm pretty proud of the result.  It plays like a fast-paced sudoku, and introduces a unique puzzle mechanic inspired by water flows!

It's a pretty simple idea, each tile has a goal number (top left number).  Create chains of directed flow to match the goal.  Each tile can have flow come in from any of the adjacent tiles, but can only have one flow coming out.

I did the sound design, the sound changes with the current value of the tile.  Basically as the tile's value increases the a note is chosen along a scale.

Levels are endlessly generated, and the difficulty scales up well.  I put a lot of work into guiding the player through increasing difficulty.  If you follow it's lead, you'll eventually be playing levels with negative numbers for a truly mind bending experience.

I also worked on the ability to share a board you're playing.  This is done by encoding the board into a string, which is added as a parameter to a url and can also be put into a QR code for easy sharing.  I expect just about nobody to use this feature, but found it to be a good exercise, and it's there if you want it only in the mobile versions for now (Mobile releases May 14th).

After 100 wins across any of the difficulties, you'll unlock 8 direction mode.  This is the mode I wrote the original prototype in because the algorithm this game is inspired from is called D8, for Directional-8.  It's harder, so after 100 games you might enjoy the extra bump in difficulty.  I chose to use hexagons as the starting mode both because it's easier and also it's more intuitive to create flows from the 6 sides.  In 8 direction mode, the tiles are squares, so it's less intuitive for new players to flow into a corner.

I'm including the desktop versions for Windows/Mac.  It plays in window mode because I found it enjoyable to have it running while I was doing other things, making it easy to play for bits at a time.  I did make a Linux build, but I haven't tested it, if that is important to you, I can include it.   I expect it to work, there isn't anything really complicated about the build.

The browser version only includes the first difficulty level (still gets pretty hard) and does not have saves.  It's also free to play as much as you'd like.  Please try it, I'd love some feedback and am happy to answer any questions you might have about the game or it's development. 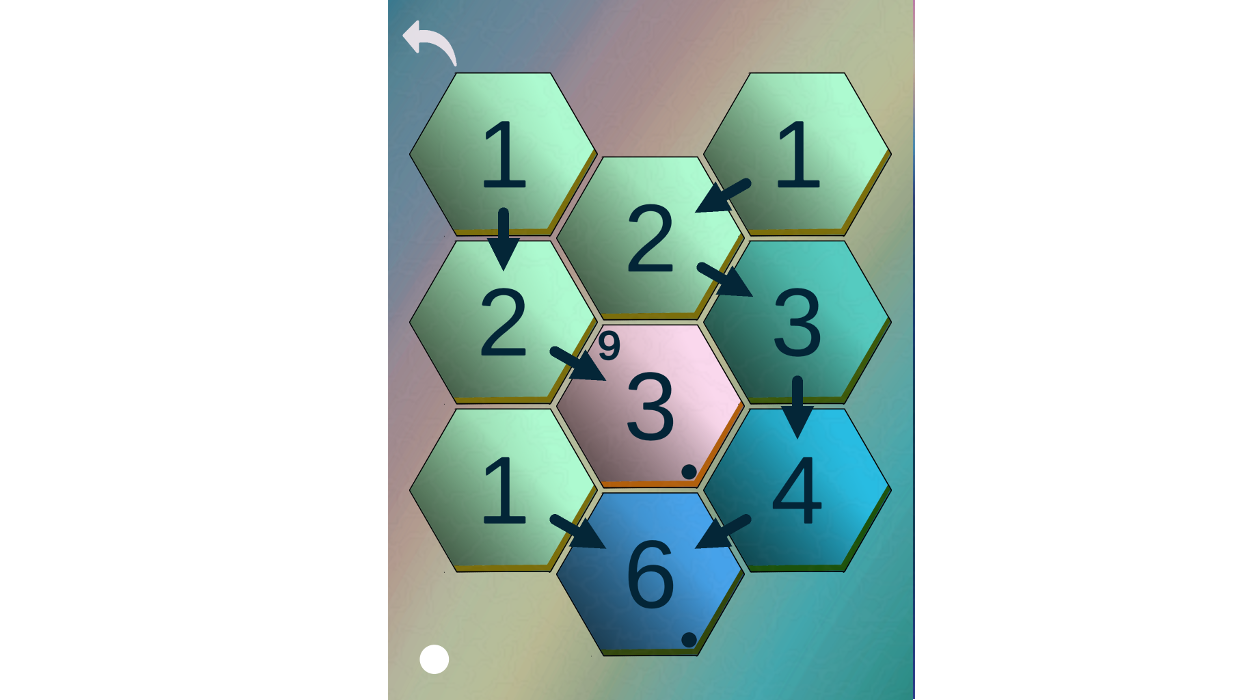 I like the visual style, does a good job of staying simple and still eye-catching.

Finding Sutherland is a collaboration between Liz and Scott, Artist and Programmer.  It's our first serious collaboration after dozens of prototypes.  We've put together a teaser of the game in the video below.

We recently integrated original music by Nathalie Bonin.  The music is emitted from each gravity source and serves as an audible cue for proximity to hidden gravity sources.  We are quite pleased with the results after integrating the new music.

All the footage in the trailer is actual gameplay.  In Finding Sutherland you explore clusters of mass with the ability to reverse gravity.  Find hidden masses by using visual sensors that describe the gravitational currents.  Listen for each layer of music a mass emits to serve as an audible cue of hidden gravity sources.

If you like the trailer, please take some time to try out the demo and let me know what you think.  We're always looking for feedback and are currently working on building a full game.
Finding Sutherland WebGL demo

Thanks fluffy!  I just saw this comment, guess I'm not getting notifications for comments yet.  Thanks for checking it out and I'm looking forward to seeing more of you and playing more of your games!