Ok, it was my bad, I never found the graveyard, maybe add a mention of that to the walkthrough to be a bit clearer.

I'll check a walkthrough just in case then to see if I did something wrong, but this is what happened:

After waking up, I went to the right, saw Drissa, talk to her and when I tried to go back to the camp, the screen fades out but then fades in back in the room to the right. When I then go to the camp, it works but Witt doesn't return.

I'm getting stuck even if I follow the instructions in the walkthrough exactly. No errors in the output_log.txt so it seems like some weird glitch in the game logic. Let me know if you want more details.

Hey this was cool! Felt really short, but that's of course a good thing :) I hope you get to make the full game!

Thanks! Glad you liked it! 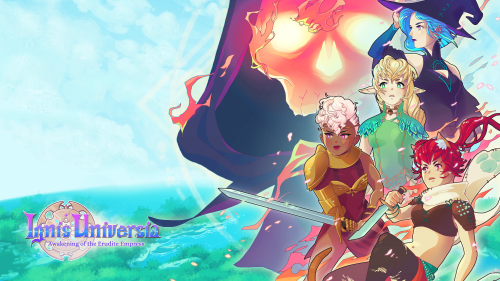 So, way back in time so long ago barely anyone even remembers what it was like (2019), we did this game called Ignis Universia: Eternal Sister Saga for Ludum Dare. It was a mix of Visual Novel style storytelling with JRPG battles and had a lot of quirky humour (written in a near-comatose state of tiredness, as one does in a game jam).

The game did well enough in the jam and continued to gather follows and comments here on itch, so we decided it was time to do something with it. Thus was born the Eternal Sisters Saga DX, an expanded (now almost an hour long if you play all the content!) which was also released on Steam. Encouraged by the very positive reviews there, we started working on a sequel. The first demo and the Kickstarterfor that sequel is now here!
Ignis Univesia: Awakening of the Erudite Empress continues in the same vein as the previous game, but instead of just having JRPG battles in midst of dialogue, we expanded the concept to include full 3D dungeons.

Not exactly. It always starts with the shield + poison, but after that it does it randomly with maybe 33% chance.

"the horse was nice" is probably my favourite feedback about this game ever.

Thanks for making the video!

You had really bad luck with the Death Ravager enemy!

It's the last song (Lunatic Dance) from here: https://wingless-seraph.net/en/material-music_vocal.html

No link to the LD page?

I have to admit 80s London pop music scene is not exactly my forte, but having hanged in other similar music scenes, this was a very familiar phenomenon! The game's very well made and though it felt a bit overwhelming at first, getting started was easy enough and there were enough clues to complete it without resorting to guessing.

Pretty cool! I remember playing a very similar game on mobile some years back.

I loved this one! Definitely my favourite in this LD so far!

Great use of the theme! Love the art and the sound too, but where the link to the LD site?

Very nice! Somehow reminds me of Thud! from Discworld.

It's made in Unity.

Thank you! Glad you liked it :)

Thanks for making it video! It was awesome!

If you're interested, I also wrote a short post-mortem here: https://ldjam.com/events/ludum-dare/43/room44/room44-post-mortem