Chalk Stories - Lonely Oni
aklgupta
GIF
BTC King
Do you have what it takes to be the BTC King? Challenge yourself in this semi-text based game!
aklgupta
Play in browser
Boxes of Trouble
The boxes are bad. The boxes are on an rampage. How long can you survive?
aklgupta
Adventure

Thanks a lot for those kind words. I really appreciate it.

The game dev was rushed and changed a lot during it's the one/two month game jam. So, there's some inconsistency, and a lot of hidden/lost story lines in the original code too.

My plan was to have PIA be a real AI, and allow users to actually really talk to it/her. But it proved too big for a short game jam, and way over my skills.

Maybe I'll continue it, or remake it in Unity someday, but after my current project.

Once again, I am really glad you liked it. Thanks a lot!

Yes, I understand. Several updates including save feature were planned, but I ended up getting so involved in my other project that I decided to drop it. Also, this game is made in JS and I don't know really JS, so even if I do resume working on it I'll probably need to find a JS developer first.

If I find enough people playing it, I might make some time and at least implement the save feature.

Thanks a lot for your feedback.

I am not sure exactly which PIA's dialogue you are referring to, but yes, that's how it should be. You replied with "yes", thus stating that you hate PIA. So, PIA, in a fit of anger, deletes everything, and you lose the game.

Maybe you should try again and answer differently this time.

Oh, and just a heads up. Your game progress is not saved, so once you close your browser, you lose all progress. It was an planned feature, but I have abandoned/stalled the project. I don't know if I will ever pick it up again.

Sent a request from aklgupta#4723

I have a team of 7 working on a sad tragic story driven 2D game being developer in Unity, called "Chalk Stories - Lonely Oni". We could use another artist and I think your art is quite good in that regards.

You can find some art examples, and other details here:

We are a team of 7 looking for a Unity programmer/developer to join us to work on a sad tragic story driven 2D game project called "Chalk Stories - Lonely Oni". It is an unpaid/rev-share position.

We are a team of 6 looking for an artist to join us to work on a sad tragic story driven 2D game project called "Chalk Stories - Lonely Oni". It is an unpaid/rev-share position.

You can find more about the project (and art) here:
https://www.reddit.com/r/gameDevClassifieds/comments/fr42ps/small_team_looking_f...
https://aklgupta.itch.io/chalk-stories-lonely-oni (a bit outdated)
https://twitter.com/aklgupta

Btw, I went through your portfolio. It's really good, and was glad to see Inkscape there. Anyway, as I noticed a lot of character designs there, I wanted to ask how comfortable are you drawing sprite sheets for characters and/or creatures?

We are a team of 6 looking for an artist to join us to work on a sad tragic story driven 2D game project called "Chalk Stories - Lonely Oni". It is an unpaid/rev-share position.

You can find more about the project (and art) here:
https://www.reddit.com/r/gameDevClassifieds/comments/fr42ps/small_team_looking_for_multiple_new_members/
https://aklgupta.itch.io/chalk-stories-lonely-oni (a bit outdated)
https://twitter.com/aklgupta

Reply
itch.io Community » Game Development » Help Wanted or Offered · Posted in [Unity][Programmer][Free]Developer with some free time looking for a project
aklgupta95 days ago

Sent you an request on Discord from aklgupta#4723.

Ran into the same error with v0.13. This time I was able to talk to Sven initially. However, as soon I completed his quest (the one where we need to get 50 stones for the forge), and went back to speak to him, the error re-appeared. Can't talk to any of the NPCs.

Read your message after posting this.

Update: I was wrong about one thing. When trying to dialogue with NPCs other than Sven, it's not always the player/MC reporting the issue. I am not sure how accurate this is, but I noticed whenever I try to initiate the dialogue from the counter, the NPCs avatar shows up and reports the issue, but whenever I reach behind the counter to get closer to them (I almost always do that to make it easier to trigger the dialogue), then it is always the player that reports the bug. It could just be a coincident though.

It could be some specific series of events that cause this issue, which might explain why I am the only one running into this issue, though it's hard to imagine what can cause such a bug only when performing some specific sequence of events. If you want, I can share my save game. Just lemme know f you want it.

I suppose its possible that the dialogue entries are getting corrupted.

I believe so too. Else other NPCs should still be able to talk to. Also, the weird thing that with all NPCs it the player informing about the error, but only with Sven it's him who informs about the error. And it was the first time I tried talking to Sven when the issue was first triggered.

Maybe, you can do a quick search to all the references to the keys, and see if they are being edited anywhere where they shouldn't be. Or, maybe these "conditions" that you are using to generate the keys could be the issue. Is gold amount, or resources/inventory, or open quest being used to generate the key?

With any luck I can patch the issue without you losing your save.

That would be awesome. I hardly get anytime to play (life of an Indie game developer, guess you might know), so I'd hate having to restart from scratch and pray that I don't run into the issue again.

Using these values the game checks all the dialogue keys related to that NPC and pulls keys from the list based on the state of the previously mentioned variables. For instance it only pulls keys with the word “Rain” in it when it is raining. Once it has a list of keys it picks one at random and grabs the associated dialogue.

I have a similar system. I as thinking of showcasing it this Saturday on twitter for #screenshotsaturday, but I guess I can show you in advance (check your Twitter in some time). It too takes a lot of variables into account to see which dialogues are possible at the moment.

The fact that you are getting that message literally every time you talk to anyone would mean that every key in the game has been tampered with or maybe the key data is just gone entirely, but I can’t think of anything that would do that. Like I said before its pretty much set it and forget it.

or, the key is being generated incorrectly for a particular variable/scenario, which is constant, at least for the time being, like perks, gold amount, tool proficiency, etc.

Downloaded a fresh copy of the v0.12 today.

Sorry if I am meddling, but as a developer myself, I'd suggest to look for alternatives to any text based keys, if possible. I have no experience with or any idea about construct, but I am quite sure there must be a way. I recently developed a dialogue system for my new project as well, so I understand that it can be a bit challenging and time consuming, but it will be worth it, saving you from a lot of possible headache.

Also, I noticed something. When talking to Sven, it is Sven who says these set of dialogues, but when talking to other NPCs, it's the player who says "Oops, you've encounters a bug...", if that means anything.

This bug first appeared when I tried talking to Sven for the first time. By then I already had the Forge quest for Sven, and a few others, in case they are the trigger.

I am unable to progress any further. Talking to any NPC is resulting in the same error. I am playing Verdant Village V0.12 Windows.

I am getting this bug repeatedly. It asked me to report the bug, so here you go. 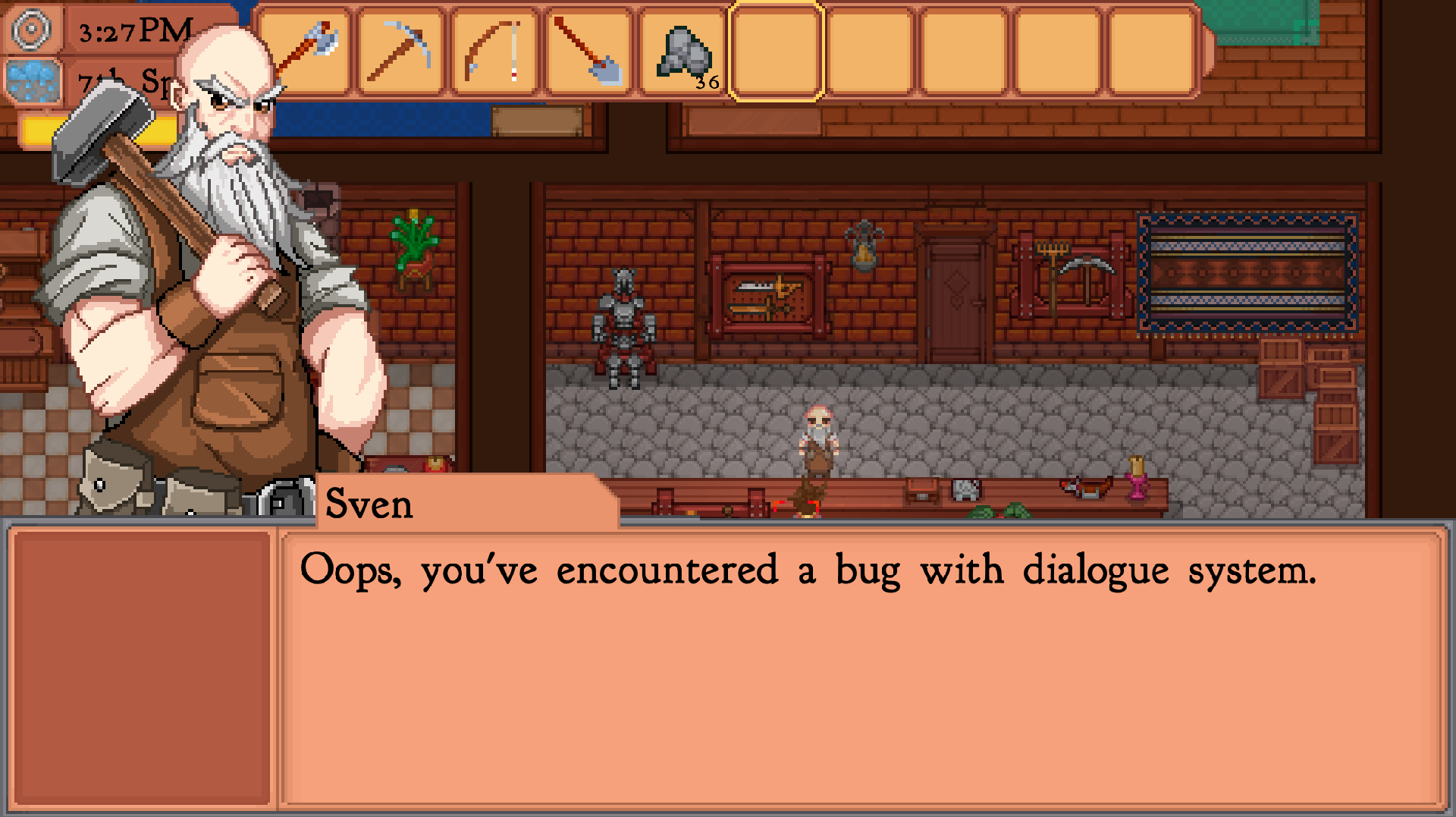 The dialogue text is often displayed in place of the character name, and whenever this happens, the text gets cut off after a few character, making it difficult to understand what is being said.

Love it! It's really fun and engaging.

As of now the autosave are incremental. This will lead to huge disk usage.
Instead, I'd recommend to limit the max no. of autosave files to say 10. This was the player will have enough flexibility without taking too much space.
Manual saves can, and probably should be, unlimited.

If you remove the upper floor rafts and they had resources on them, the resources will stay afloat in the air. 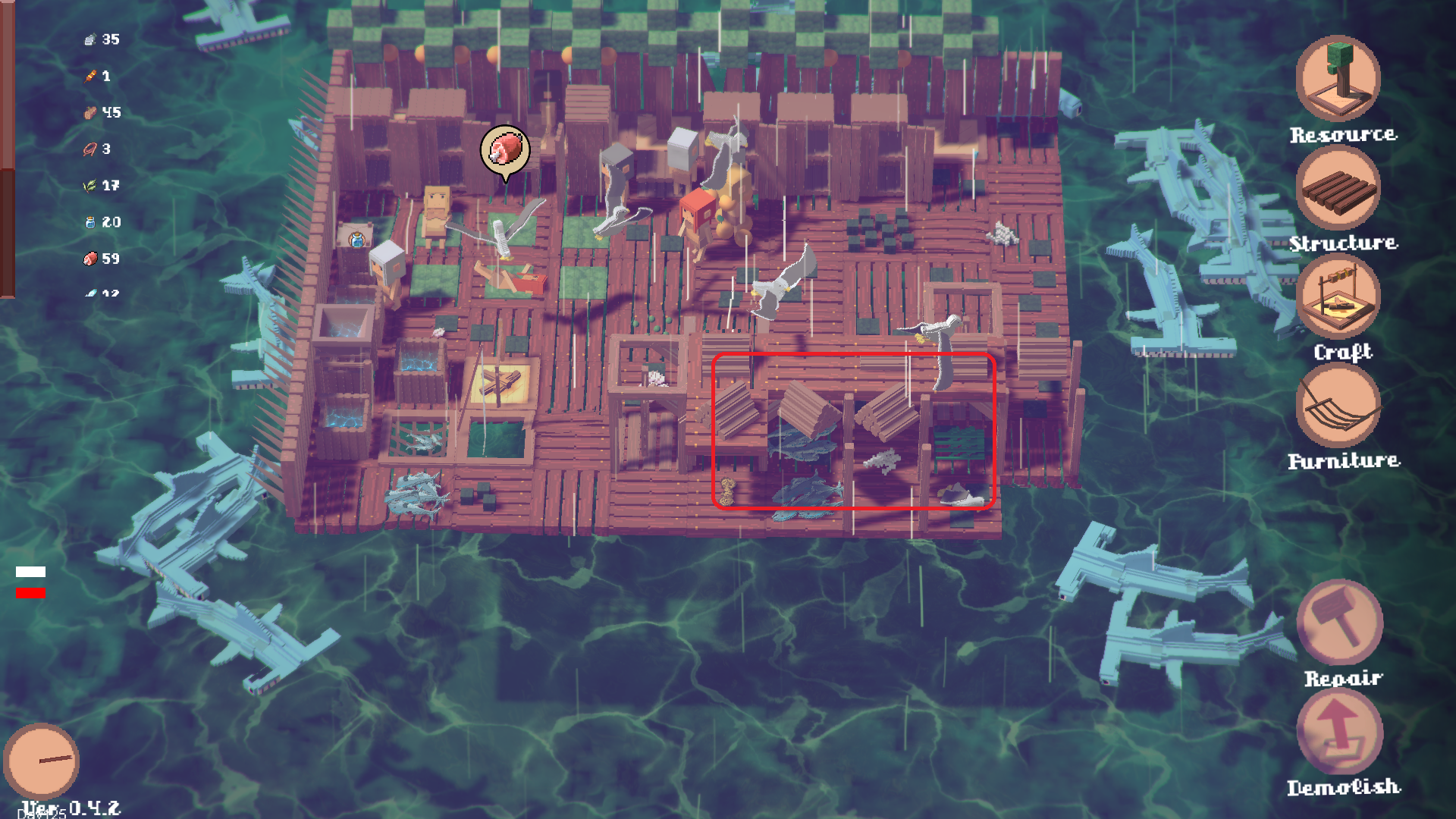 Playing v0.4.2. Loved the game so far. However, I found several issue. I'll try list as many as I can recall:

You could keep a track of the resources, and make sure incompatible/non-sensible events don't occur, like the one I pointed out where I was asked to let go of a warrior to pursue some other path in life, but I didn't have any warrior whatsoever, thus making no sense.

One odd thing I noticed was that even when I had 0 warriors, the events where a warrior wanted to leave their warrior life in pursuit of something else would pop up. This obviously makes no sense as I had no warrior.

Also, I noticed that warriors a bit hard to get by and die too easily. But also, they are the only absolutely non-essential as long as you have some supplies to spare. Maybe have more use for them?

And, when I tried to lose the game, the game over message states that I completed 0% of the journey, which might be a bug.

Changes: Fixed a bug, thanks to some awesome people on Discord :)

Enabled the itch.io setting to allow users to scroll, in order to see previous logs.

Such a nice game!

It looks really great. Will probably try it once it is released.

It really looks awesome. Real bummers it can not be exported yet.