Thank you so much for playing and taking the time to rate and comment. Really helps with motivation and exposure! Much appreciated :D

Thank you!! I really should get them colored soon :)

Hi, I got your email, thank you!! I'll respond better later :)

Thank you for playing and thoroughly commenting. I really took your feedback on prior versions to heart in creating this one!

I'm glad Nameless is one of your favs; I had a lot of fun writing her as she was never going to originally leave the office. I got to surprise even myself by making her more essential to the cast!

I could certainly delve into more of the cryptic info of the game. Perhaps I could send that to you somehow? :) Fun little fact about the dialogue, is I didn't put the character names next to what they were saying while writing it, and tried to make their personalities unique enough to identify them just based on how they said things. Writing is definitely something I'll want to continue to work on.

Visually, there's a lot more work to be done. I'm just in the stages of deciding how to go about that but sprite revisions and colouring is on the agenda. Remaking the pixely portraits will have to be something I place careful attention to, as you've mentioned the aesthetic can be appealing here, thank you!

I haven't worked on it again since this release and will revisit it with these notes in hand for a more unbiased play through. Going through it a hundred times while testing can certainly make some things go unnoticed!

I'm glad you remember, thank you! Working toward making it even better! :)

Thank you so kindly for such an uplifting and insightful review!

It's really  great to gain your perspective on these things I'd thought about early on or forgotten. Should I find the time, I'd like to work on re-adding what was lost based on your suggestions!

Thank you also for your offer!  Perhaps we should get in contact however I should first see if I can schedule in being able to develop this further along with other projects. :)

Absolutely loved this. Very impressive and FUN demo. Couple things I noted were if you jump right under a golden drop, you can stand in the air a bit just below it and jumping on top of it can create a lot of collisions and dust. Sometimes when I'm jumping forwards then go backwards, the sprite stayed forward but I could see this by design. I'm not always the best with analogue controls, especially in a platformer usually favouring the D-Pad for these types of games, but the control with the joystick was actually really tight, accurate, and I was able to play incredibly adequately. This game will continue to be on my watch for sure, especially now as I really enjoyed it. Keep up the great work!

Thank you so kindly for checking it out and for thinking of me! There's still a lot of work to be done and will try to post updates on Twitter as it progresses :)

Legacy Sisters™ is a kinetic visual novel like story that takes place in a futuristic year 2000 Silicon Valley like setting.  It centres on a young woman named Ampa, who is 19 years old and fiercely independent.  She likes and works with technology but distances herself from using it personally due to anti-trust concerns toward the companies that create it and the data mining associated with them.

She lands on a very significant discovery, a robot named Aarel (RL-117) who is a working prototype resembling a human in every way – built in 1982, prior to a technology crash that saw ceased production of any further human resembling robots.  These robots were subsequently banned and never made again in favour of pet-like personal robot companions that replaced them.

Ampa is fairly well off for her age despite working a menial job at a tech company named Ample Computer.  With a bit of entrepreneurial excitement, she sees a potential in Aarel not even seen in technology of the time that she wishes to reveal.  She lets her guard down for a moment and posts pictures of Aarel on the Internet.  This makes Aarel, who is one of a kind, a massive target of interest; not only to the company that built her, but to rivaling tech companies as well.

Aarel ends up being located, stolen, copied, and modified with weaponry but uses it to escape and return to Ampa.  How many of these other robots resembling humans exist, hiding in plain sight or behind closed doors?  Ampa suspects that the company she works for, Ample Computer, has the ability to produce such a robot and after seeing Aarel, fully believes the rumour that they may have already done so.  She uses Aarel as key leverage to exploit this suspicion, thus Ampa and her robot, Aarel embark on their journey…

I really enjoyed this. Good length, tension, atmosphere, sound, humor, likeable and diverse characters - the writing flows nicely too! Took me a bit to figure out the keywords system (see it highlighted here tho so I shoulda paid more attention to that xP). I actually want to see the other ending! Couple sentences get cut off like the volleyball flyer but otherwise very polished!

Thank you so much for playing and commenting! :) I really appreciate it and will be definitely looking into the Game Development World Championship, for sure!

It's a linear little story, Visual Novel like made in RPGMaker 2000!

I've always wanted to make a story with my music and character designs/drawings - so here it is! 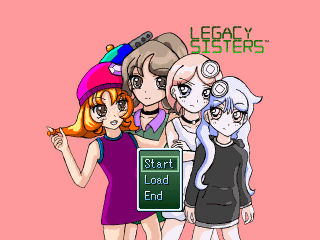 It was going to be a one evening a week awkward little project with some simple attainable goals for the sake of creating a proof of concept and getting something like this completed...but it grew a bit...and I'm happy with it! :)