Thats strange... I've just tried on a windows PC and worked fine. Can you give me the full specs of your system? what images are you trying to export? If you run it from cmd does it show anything? and if you run in cmd with s parameter? like "laigter.exe s" in cmd

I get a message saying everything exports... but when I go to exported folder... nothing is there. lLke I said, only if I click the top export button do I get the one and only normalmap... nothing else. 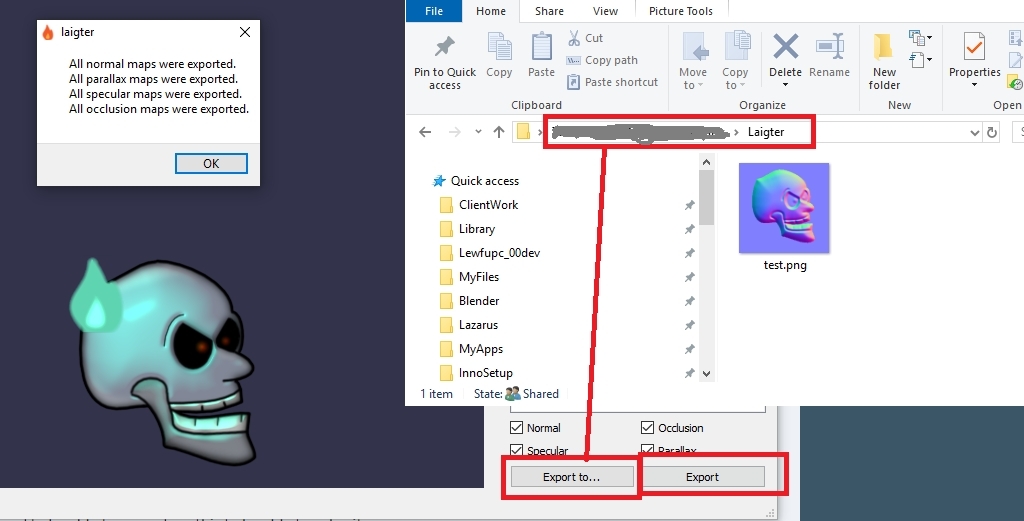 FYI.. .screen doesn't reflect location of the application. I have a folder I keep all my created content in. I just named that folder Laigter too.

Thanks for the feedbak. Perhaps a dumb question, but have you tried with other pictures that are not the sample one? Export all and export too are not meant for the sample images...

I'll look at it further and tell you if i find anything.

The top bar export button, as i said previously, it's a bug is already fixed and ready for version 1.5! I think i will be able to release it soon.

Well... it's not a dumb question... I did try my own image and it exported. However, how do I export a finished image. I get the 4 "texture maps" but what about the finished preview???. I would be just needing the final image for graphic design. Not really needing the maps unless I am making a game. I know this is with game dev in mind. But, just an output of the final image would be used by lots of people.

Just a suggestion. Most people when they first download a piece of software will test what ever is available for testing. If you don't allow exporting of the sample skull. Then some people will walk-away from the app thinking it doesn't work. If you don't want to allow export of the skull, then you should consider adding a message dialog stating that they can't export the skull and should test using their own image. Most all people test software to find it's max functionality... and output is very high on the list.

Hi! Thanks a lot for your suggestions.

You are right about the message in exporting the skull.. I know i should have either added the possibility to export it, or add a message, but i simply didn't think of that! I'm a lone programmer and i do this on my free time, so it's not easy to have everything in mind! Sometimes i just have my mind in what is the tool meant for and it's hard to see beyond it.

About the preview, it was first requested to me as a feature in version 1.4, so i'm adding it in version 1.5 that i hope i can release today. This tool was initially intended for generating maps and using them ingame in shaders for my personal use, so i didn't think it was useful. However, when i released 1.4, some people suggested i should add it and i did! But for next release.

So stay tuned and get version 1.5 where (i hope) this problems will be solved!

No, problem... i program software too. So I know that there is a lot to think about. This is a great idea BTW... Keep up the good work. You never know... it could get really popular and you could sell it.

Thanks for the kind words! i really appreciate them!

Yes, i found out that windows is not printing my messages, don't know why. Ah, and also, the skull exporting will probably not be present in 1.5, as i'm just finishing to build it... But preview export will be there!