Naah! "Those alien-kids these days..." (wild card) Kind of dumb... so I killed most of them! 😁
Well, and after reaching over 1'000'000'000 points the game became kind of boring. I was somehow hoping for the alien mother ship as an end boss. Well the font for the score seems a bit big for the screen width! 😅 BTW: I really reached that score by valid playing. Just positioned the ship like on the screenshot below and shotting as hell and it will clean the way for the own ship without any hassle to move left or right ...well, I suggest to fix that by making the collision boxes for the shots smaller or make the aliens appear in non-discrete x positions. Playing the game as it is surely designed is kind of hard ... The soundtrack seems boring at the beginning but becomes more interesting later. I totally love when those brass instruments come in.
When you don't get far with the game (due to being kind of hard already at the beginning), you can however not enjoy that part. I'd probably adjust the difficulty .... less aliens at the beginning and then increasing over time. This would give the player a bit more joy and time to adapt to the game mechanics.

Keep it up! You just need to add a little more details and the fun playing this game kind of explodes. Hope to see any future releases of this... 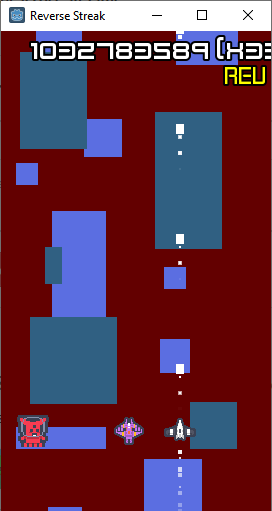 Hey. Thanks for the detailed feedback. All good suggestions. I spent so little time on this, even considering jam constraints, but hopefully I'll manage a few updates after voting. Cheers.