Hey! Thanks for your tips for improvement!

It could use some more suit names...

Yeah, I should have been less conservative about suit names, I will add more of them. I haven't read Dowager of Bees, probably I should...

...It would be nicely surreal to have a wide variety of titles like that...

Unusual face cards are interesting, but in contrast with suit names I can't mix them freely. "Swords, Pentacles, Doors, Chimneys" is OK. "Page, Knight, Dowager, Detective", not so much. So my only option (without complicating everything) is to have a number of predefined sets, which is not very exciting.

...One nice touch would be using textures other than gradients on some decks... Also, the style of the numbering and lettering could change from one deck to another; some decks could have a "borderless" style.

Using textures instead of gradients is technically harder. Not much (not like impossible, of course), but harder. As for numbering/lettering I don't know why it's not implemented. I was sure I'd added different fonts and occasional all caps style.

I was able to download the Javascript source and get it working, and added more text to my own liking. :) I see what you mean with the gradients; it's just enough to be a bit annoying to add texture. It looks like you've got a framework in place for alternate lettering, but the "modern" style is the only one implemented.

So each card has a number of objects associated with it, such as "sea", "sun", "star", "figure", "mountains", "city" etc. These objects work in different ways but generally have an actual position on the card, and often an associated "mask" that determines the shape of their "density". Objects also have a flow field, which I take it is like a vector field, which influences the direction lines will take, if the line is associated with the object. Each object also has a set of parameters which determine how lines will be drawn; this can make lines strictly follow the flow field, or wobble around, or travel at right angles to the flow field, or zigzag, etc. etc. It can also make lines thicker or thinner, and can apply certain colors to the cells which are produced by the lines.

Drawing takes place via a number of growth points traveling around on the card. Each of these growth points belongs to one of the "objects" (as I've been calling them), but they're all on the same card so they can collide with lines being drawn by other "objects". One thing I'm not clear on, is how many growth points initially are placed onto the card. Do separate objects maintain separate pools of points, or are they all thrown in together? But anyway, just like with the famous "Substrate", when a growth point collides with an existing line, it gets moved someplace else on the card.

As I understand it, growth points actually spread outward in two directions (unlike Substrate). So I think maybe both sides of the line need to "land" on an existing line before the line "dies" and a new growth point gets placed. When both sides of a line have "landed", typically it would form a closed shape which I think gets called a "cell". I'm guessing that the growth point which completes a "cell" influences what color it eventually gets colored, via the parent object that owns the growth point.

New growth points get placed randomly on the card, according to the "density" field. Looks like when a new growth point is placed, it drains away some of the density nearby, so that growth points are unlikely to begin too close to where one has already been. There's also a limited number of total growth points, so that eventually they run out and the card is finished.

I think that covers most of what I understood. Is that about right? 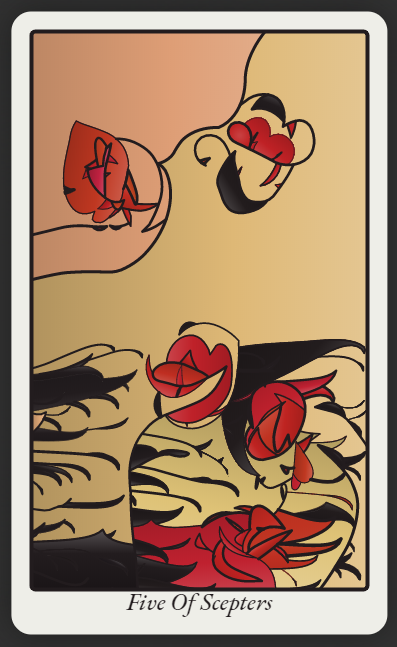 Everything sounds about right. I'm not sure about fine details as this generator was made more than two years ago.

One thing I'm not clear on, is how many growth points initially are placed onto the card.

As far as I remember, a single tracker is placed per time (or something like this). I tried to spawn all the trackers according to the density, but it looked bad: this way they didn't have chances to draw long curves because they bumped into each other too soon.

As I understand it, growth points actually spread outward in two directions (unlike Substrate).

To be honest I have no idea what Substrate is. Yes, curves grow in two directions. Otherwise there would be loose ends which could cause problems with building of closed contours.

Ah, Substrate is a screensaver: https://www.youtube.com/watch?v=dCCVgBOVD0E It avoids the loose ends by starting seeds directly on existing lines. I was acting like you'd heard of it because I've seen it mentioned a couple times in the context of history of procedurally generated art. https://procedural-generation.tumblr.com/post/124657726768/substrate-2003-shortly-after-the-turn-of-the

Having played with the code more, now I understand that the objects are rendered in one at a time to give some appearance of depth. It does look like there's a setting for number of starting seeds which gets used on a few objects.

It might be interesting to produce some symmetry by having some objects which place two seeds at a time, symmetrically.  Maybe that would be a solution for getting more face-like things to appear.

Anyway, I'm enjoying poking around in your old project. :)