If you are looking for milk for a quest where it is needed: check the shop where you buy your seeds and all that stuff. If you sort by category it's pretty far down there. That's a part of the game where there was much more planned than implemented in the end.

The Shop only change stock every 24 hours (thought it was more frequently earlyer), so if trader only got 15 milk that day you can't progress further that day.

An easy fix would be to make the Shop change stock more frequently.

If shop updated often it would fix other problems in game:

-  Random quest ask for flour before you got Mill built.

I am on last island now and on the "Imminent Eruption" quest, so guessing i have seen most of the content now.

With that in mind, i have a few other suggestion to the developers;

- Reduce the cost of workers bought after 9 workers owned. (i have played aaaaaalot and never gotten more then 10)

- Increase the money reward on random quest by ALOT. Atm the random quests eat up all your money. Items they ask for give you less in reward then the shop would pay you. +Random often ask you to buy/sell (earn/use), so you end up buying/selling stuff you otherwise wouldnt have. The increased spawn of random quest is very nice, BUT no money left to buy workers or tools or anything if you try to do as many random quests as you can. Workers are often buzzy just cutting trees or rocks instead of making gold, and the crops they ask for pay only half the price you would have gotten selling it yourself.

There are other issues like workers getting stuck until trees or rocks are removed, Trees and rocks spawning in the middel of farmplots.  Workplaces where you loose all reward if a tree or rock is next to it, missing animation of the workers that work in buildings in your worker-panel (so you end up sending more then 1 worker to same building and none of them can move until work is done). But if the other things i mention earlyer is fixed - one can still REALLY enjoy this game even with the other issues mentioned.

A big thank you to the developers for this game. I have enjoyed it. Hopefully your next project will be revealed soon. If you need a tester.... hint hint. lol

Edit: forgot to mention. After an update (2 updated ago) - there was a buggy item added to the shop. It shows up without any icon or price, and if you click it the game crashes every time. 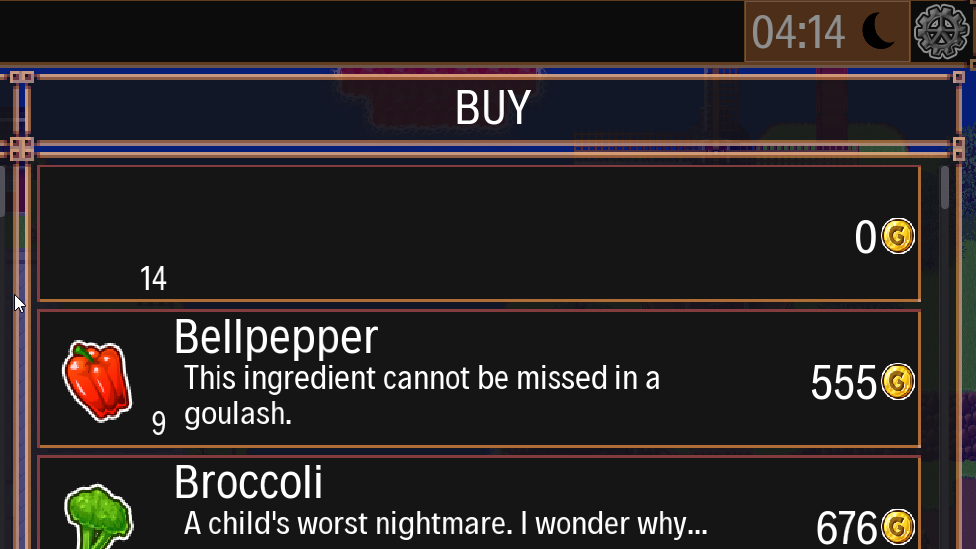 As usual, really appreciate your feedback :)

The broken item should be chocolate which was removed from the game in an earlier fix, we already realized we missed some spots.

As for balancing: can't really argue with you there, it's not something we spent too much time on when trying to get the game to a releasable state. This goes for alle balancing related stuff you mentioned, the trees, worker costs, drop rates and so on.

The workers getting stuck part made me kinda curious, maybe we'll look into that someday.

We're still glad that our little project got people interested enough to email or comment us about it. And all jokes aside: we already decided that IF we ever get our next project to a point where we have something to show (since all this is done in sadly really spare spare time), you're one of the first to know ;)

Super light spoiler: your assumption about your progress in the game is about right, there's not really much left.

I have maxed out reputation, and finished this game (cryyyy),  so this will be the last post from me.

Just wanted to say one last thank you to all of you, for all the hours of fun i have had, and wish you all good luck with your next game.

Take care, and see you in the next one :)