Submitted by UnableImp — 6 hours, 23 minutes before the deadline
Add to collection 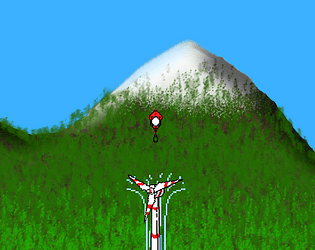 Please list any pre-made art/music/other assets that you used.
None

Oh my god couldn't you make the man on a kite move slower? It's unplayable. You can't collect packages because they move too fast, you can't dodge those birds and upgrades are way too expensive. It's just mindless grind with bad graphics and repetitive and boring music.

Did play my game? I don't think there were any birds in it.

I google it just to make sure and moles are the only animal with a star nose.

Well my bad. I was talking about moles.

great game :) and the sound effects & music are great!

This is an interesting one.  A game where you have to upgrade a wind turbine in order to fly up on a kite high up into the sky.  Don't see that every day! :)

I like the upgrade idea in order to use the wind turbine to reach the sky.  A bit of a different turn from the comic it's based on, but it works.  The colors are nice and well chosen.

A Huge Fan does have quite a few flaws, though.  There's no clear goal to it, for starters--you ride on the fan to get more money to purchase upgrades to ride on the fan.  It's an endless loop.  Where are we going on this fan?  Are we aiming for a certain height?  Give us something to tangible to aim for.

The flying . . . mole-things? . . . cannot be dodged if they're aiming right at you--once they fly toward you, you're likely going to get hit and fall.  There's no way to avoid them, and sometimes they just skim you and cause you to fall die.   An "armor" upgrade that protected against 1 hit (and then +1 for each upgrade) would really help, but more importantly, the player needs to be able to actually dodge these things.

Moving is extremely sluggish and slow, so dodging the moles and getting red packages if they're not directly above you is extremely difficult and basically impossible.  Speaking of the red packages, those are not well designed--sometimes they are placed in unreachable areas before you have 3 turbines to actually reach it, and it's not possible to reach red packages across the screen (or even ones that are quite close) because of the bad movement in this game.  Also, sometimes I got $20 when I collected a package, sometimes I got nothing.  Is this a bug?

Like how there's a "reset game" option; that's nice to have.  Would also be nice to have a volume option for the music--it's a well-chosen track, but gets repetitive after a while.

The upgrades also could be better.  Because of the bad movement and death by mole-things, I never ran out of battery on the turbine, so I didn't really need to upgrade it.  The other ones are fine, but the prices are too much.  Because of the same issues I just stated, I only earned ~15-30 dollars for every flight, so after I upgraded one of my $50 dollar upgrades and saw the next upgrade was $250, I decided to stop because it would take quite a long time to upgrade everything.  The design of the game keeps me from earning enough money to get the upgrades, and I don't want to keep continuing this cycle.

This game is ok, but there are quite a few things that need improvement.

I guess you could say...