A wannabe slime wanting to be blue
Submitted by BoxedCherry — 39 minutes, 26 seconds before the deadline
Add to collection 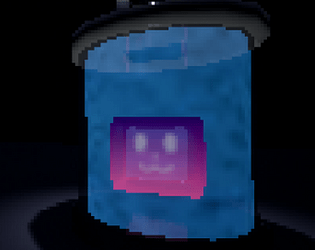 The game is very strong musically and visually. I really like the aesthetic of it. As for the gameplay, I wasn’t quite sure how the mechanics worked and what the circles were. I presume that it acted like some sort of speed boost, but I only had to use it in one of the three levels to be able to complete it. (First level I was able to pass the guards fine, second level I just slowly nudged my way towards the key and managed not to get caught by any of the guards looking at it, and third level I went straight up and used the boost.)

I also wasn’t aware that the camera could be changed until I read the other comments here, but I liked the effect after going back and trying it. It could even be used to create some puzzles where information is hidden on a face of a wall that you can’t see until you tilt the camera.

More levels and a better explanation of the mechanics would be a vast improvement for this project. If you decided to continue the project, games like this are perfect for classic puzzle elements like teleporters, colored keys for other doors which give access to bigger sections of the level, pushable objects, etc.

Overall, I think the aesthetic you’ve created here was great, but the length of the game and the lack of any explanation of the controls or mechanics makes the game difficult to judge. I would consider continuing this project and creating a small game out of it, expanding on what you have and making some changes based on suggestions from my comment and others.

thanks for playing the game and the suggestions! Always looking to improve 👌

I don't know if I should rate it now or not. I don't think I've understood the game well. I completed the whole game without actually understanding what certain things had to do in the game. like the ability to change the camera cause it didn't really affect the game or why pressing shift made those circles disappear and why were they there in the first place. I thing you should slip a tutorial or an explanation for things happening in the game

Thanks for playing game anyways man, appreciate the feedback!

Impossible to start the game. Error message about some missing files. I've tried to fix the trouble (perhaps by renaming a folder or a file), but nothing : the files are relly missing and the game will never be playable in this state.  Weird too that the name of your game changes from "Wannabe blue" to "Slime_Escape" : the meta-use of the "transformation" theme ? ^_^ For now, impossible for me to rate your game, sorry. You should upload again with all the files needed : I'm sure that everyone will understand this trouble and accept to test your new version as it was released at time for the gamejam.

thanks for pointing that out! Yeah the title was last minute so the "meta" in it was accidental. But ye, I'll try reuploading again, thanks :D