Tower defense, but you can move stuff around with a quadcopter
Submitted by lasermagnet (@LaserMagnet_com), Fodi, Teebor9 — 8 hours, 34 minutes before the deadline
Add to collection 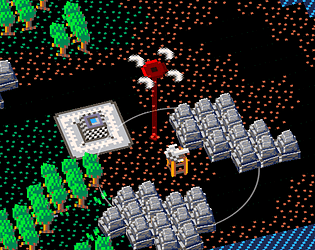 Really cool world. I included it in my Toy Box Jam 3 compilation video series, if you’d like to take a look. :)

That’s awesome! Thanks for trying our game :)

This was fun! I liked dropping trees and rocks on enemies. It took me a while to figure out the turret and tower building process, but it then clicked for me.

I found the mouse controls to be a  little tricky. I would like to play that way, but the copter has a ton of inertia. Could you maybe set it so that when you click a spot, the copter will get there and stop there dependably?

Very cool game, and very creative use of the assets! Nicely done.

Submitted
Sally Neptune vs. The Monocronies
LikeReply
FodiDeveloper287 days ago

Thanks for playing and for the feedback too! Mouse/touch controls are indeed not ideal at this point due to the inertia which we might get rid of altogether (or maybe save it for a "water level" :). Beaming up blocks already completely halts copter movement, so I guess it would be logical to allow "braking" or tap-to-move-there type movement.

So, it looks like the game is faster than when you posted in the discussions. Assuming I'm not misremembering, this speed is much better. The progress bar is also nice to have, though I think marking where the enemy waves are in the progress of the level would've also been nice.

The only complaint I have is that level 3 can be beaten by just sticking one boulder in the path of the enemies. It'd be a lot more work, but I think that design would need the enemy ai to be able to evaluate paths with boulders are being higher cost but with the enemy being able to break the boulders if there's not faster way. Levels 1 and 2 are good though.

Thanks for playing - again - Colin! Level 3 was a last minute addition with almost no playtesting and the issues you've raised are spot on. Enemies should be able to break through stuff if no path can be found to the base; simply because players can otherwise just place a bunch of rocks/trees in a neat shape around the base and be done with it. We might also add some more restrictions (either via level design or new mechanics) on where stuff can be placed to prevent this sort of play.