Our main character is a giant vine. 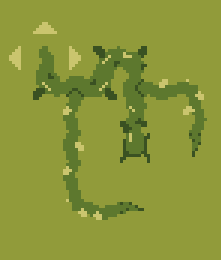 10/10, although I would’ve loved the option to transfer my debt to William Charles Schneider.

That’s awesome! Thanks for trying our game :)

Just beat V2, thanks for the fix!

Absolutely incredible. I love the gradual introduction of different mechanics, the level design... and the level of polish is just insane. The dialogues are funny and a welcome addition.

I'm also very thankful that the game is quite forgiving and not a cruel Nintendo-roguelite and I can retry levels without losing progress (apart from the level being reset).

This is without my question my favourite TBJ3 game.

Lovely and straightforward educational game; great selection of graphics and sounds. I would've loved some more enemies, possibly some boss fights, but it was very enjoyable nonetheless!

One tiny suggestion: I think the game should automatically take the current input as the answer when the time runs out, so if the player manages to type in the correct answer but isn't quick enough to press space, that should be okay.

Thanks for playing and for the feedback too! Mouse/touch controls are indeed not ideal at this point due to the inertia which we might get rid of altogether (or maybe save it for a "water level" :). Beaming up blocks already completely halts copter movement, so I guess it would be logical to allow "braking" or tap-to-move-there type movement.

My only issue is that I also got stuck in the last door on the level where there are 4 laser cannons (nice reuse of the bell sprite btw :).

Thanks for playing - again - Colin! Level 3 was a last minute addition with almost no playtesting and the issues you've raised are spot on. Enemies should be able to break through stuff if no path can be found to the base; simply because players can otherwise just place a bunch of rocks/trees in a neat shape around the base and be done with it. We might also add some more restrictions (either via level design or new mechanics) on where stuff can be placed to prevent this sort of play.

I've had a lovely time playing this. It's a great idea implemented really well, the controls felt great too, I just wish there were more levels. The space helmet wearing chickens are freaking funny!

Although I love the mechanics and the level design, the controls are fluid, this game unfortunately keeps reminding me that I freaking suck at platformers.

Nevertheless, it plays great, unlike me!

Holy crap. I don't know a lot about PICO-8, but I'm pretty sure this game is doing something like what some demosceners are doing with C64s.

The last update* is up!

I appreciate that,  helps a lot! Can I ask you about your CPU, GPU, OS and browser?

I'll try to do something about the block placing issue, maybe give some visual feedback; and also I'm pretty sure it's impossible to place blocks near fences (outside of them) because the fence hitbox is too big.

Thanks again for the feedback! :)

We're still working hard on adding more content (levels) to our jam entry Copterfields and as the dev I'd also love to hear how the game runs on your device / browser. If you have a minute or two and could try running our game in your browser and provide some feedback and FPS numbers, I'd be very grateful.

You can run the game on our Itch page, although it seems to me that on some browsers the iframe embed method also has a toll on performance, so I've uploaded it to our server as well:

Very enjoyable! One thing I'd add is a timer so when you finish the game you can see how many seconds it took and compare it to others.

Sorry for the clickbaity title ;)

My question is: is it fine to use the sprites as textures/billboards in a 3D (or fake 3D) setting? Reply
TOY BOX JAM 3 community · Posted in HOW DO I GET INTO THE TROVES?
Fodi244 days ago

I've solved the second and third one almost immediately (that's a great reference on the third by the way!), but I have no idea what to make of poem one. Can you give us a clue, Tom?

I like the concept (and also the music and graphics), but as BirdCat Nate mentioned, once I've carried down a bunch of weight to the lower decks, I felt pretty safe and newly dropped cargo just didn't affect the boat anymore. Maybe if old cargo would "rot" after some time (possibly quicker when in contact with water) it would be more of a challenge since you'd have to constantly replace old crates with new one. Although rotting anvils don't sound too realistic :)

Also (and I might only be writing this since I've recently played Unrailed and Overcooked), it would also be awesome if crates of food would have to be delivered to a canteen, or gunpowder crates / cannonballs to higher decks (in an attack scenario), so the player would need to balance the ship [and] deliver required supplies to the right places as well (sometimes removing them from the lower decks so they will need to be replaced with something else to maintain balance)... but I might be overthinking it :)

Yep, this is definitely more challenging, although partially because of the bugs :) I'm not sure what could be the issue, sometimes I was only able to draw very small platforms, sometimes I could draw really long ones as well. I'll be back for the next update though!

You're very welcome. I'd probably go with the first version (hit a platform, get one platform back) or maybe introduce a pixel "currency", where you have N pixels you can use to draw more small platforms but fewer big ones. Come to think of it, maybe simply limiting platform size could suffice as well. Destroying blocks could also raise the platform limit (either permanently or temporarily).. not sure, it's best to playtest it :) which I'd love to do if you make updates!

I love the retro LCD look and the controls and sounds are great!

I did find the game a little too easy, after about a minute I just figured I should draw a bunch of horizontal lines in the lower half of the field so the ball won't even come close to the hole: 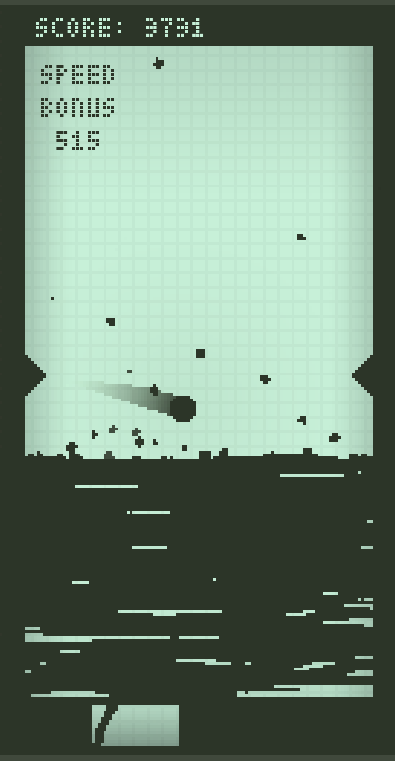 Maybe there should be a limited number of coexisting platforms?

Also I've noticed one small bug: I can still hear the ball bouncing on the game over screen.

Reply
🎃 Spooktober Jam 🎃 community · Posted in 🎃 And the Theme for the Spooktober jam is....
Fodi346 days ago

I usually keep it light with jam games but it's going to be a challenge with this theme :)

Wow, we really appreciate that, Ron! Great suggestions / pointers, very constructive (and 100% justified) criticism - I was taking notes throughout, basically everything you've mentioned is going on our todo list.

Thank you for taking the time to play our so-far-quite-crappy game! ;)

Oh, you are too kind! :) Thanks for the review and taking the time to play the game, 980 indeed very respectable! I'll fix the grey sky in the next update, I promise ;)

This is one of the strongest contenders in the jam IMHO. Such a simple idea, yet I would have never thought of it. It's also a very cohesive experience, the visuals and the audio goes together like PB&J. Crisp controls, where timing is key - it feels like a genuine Nintendo title.

This is a very well put together game. Cool visuals and music (Kevin MacLeod is king), infinite replayability; my only beef is that sometimes a high speed monkey enters the screen and I can't dodge it. Maybe if it was zoomed out a little it would be easier to spot those and look for "escape routes" - but that's an easy fix if you agree. Really nice job overall!

It's a very interesting idea (I love physics puzzles by the way), although I have to agree with Robin - it's a bit too fast paced and I don't really feel in control of the cannon ball. Maybe if it wasn't scrolling (at all or at least that much, so the level would more or less fit on the screen) and the falling was happening in slo-mo it would be a bit less about luck and more about the player rotating the magnets just the right way. The original idea is great and I can definitely see you building upon this and consequently making a wagon of cash porting the game to mobile and selling different looking cannon balls as in-app purchases! ;)

Thanks for trying our game, Robin! A ricochet counter is #1 on my todo list :)

Thanks for playing mrkos! You are spot on with the control issue, we're planning on adding some smaller levels with fewer objects in the beginning and the ability to upgrade bullet specs (speed, steering, number of ricochets) between levels,  so more difficult levels (with more stuff in corners for example) can be overcome with better "bullet handling" :)

Finally, a game where I'm not dying in 3 seconds in the first 5 runs! :) Very nice difficulty curve, it's fairly forgiving in the beginning, just the way I like it. I love the art style and the atmosphere too! The controls are crisp, controlling the artifact is intuitive but still non-conventional... really nice job, folks!

Thanks, André! That is a fine idea! We've planned some upgrades (more ricochets, variable speed, faster turning) but didn't have time to implement it in the end but I'll probably give it a few more days after the jam and finish those.

Thanks for playing, that's a very respectable score! :) The ricochet counter is going on the todo list, thanks!

Thanks! Totally understandable, I tried to do some camera lerping during turns but there's work to be done in that department (as well).