myc with sound
Submitted by Power Games — 10 days, 18 hours before the deadline
Add to collection 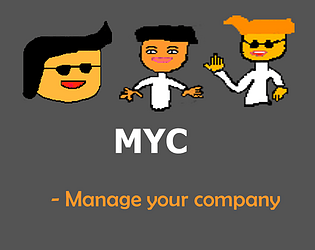 I think the idea is there but the execution needs a rehaul. The biggest issue is having to wait long periods of time before being able to do something. If you plan on doing so you need to provide the player an alternative game experience. Jokes and riddles don't work for games as a filler. Also if you think you aren't good with UI and music the best way to go about it is to work on them and improve. I'm sure you can do it!

I like the idea of the game, actually the idea of the game is amazing! and the system of the game and everything is pretty alright. But (no offence) the designs, UI and music were pretty bad, I found alot of lazy parts in the game. If you could work on the design aspect of the game it would turn out great, but overall amazing game, amazing idea, this has some potential with some more work. If I had to give it a score out of 10 I would give it a 6/10, maybe a 7 for the idea.

I know that Ui and music is bad.. I am not too good at both of them. I will try to improve them with time. Thanks for your suggestion