The Suicide of MrTanakaView game page

A short mystery adventure about the horrors lurking in a corporation.
Submitted by GKorn (@evil_uniKorn) — 38 minutes, 53 seconds before the deadline
Add to collection 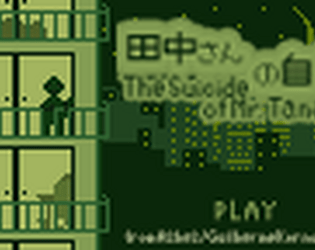 The Suicide of MrTanaka's itch.io page

Can't say I was scared but I was definitely intrigued.

It got that Eldritch horror vibe down.

Loved the art and overall tone, really liked your ending. Some text was challenging to read but I appreciated the style. Would love to see this fleshed out into a longer game.

Thank you so much for playing the game!
I'm really glad you liked it.

Really cool idea, and I really love the vibrant game boy style graphics! The minigames help with the pacing too!

Thank you so much for playing the game!
I chose the "game boy-ish" color scheme because I really suck at art, so I'm really glad you liked it!

The nice thing about mystery games is that you want to know what's going on, so you keep playing... that's what this game achieved for me after just ten seconds of gameplay. Nice job!

Thank you do much for playing my game! I'm really glad you liked it!

This is a very impressive mystery adventure game given the scope of being composed in under a fortnight. The game features some great techniques for an adventure game including an overworld, lots of different forms of text to convey the narrative , and multiple locations that open up over time. The city of Osaka is lovingly interpreted in this game in an effective way - I particularly like the Red Quarter. Is this inspired by Osaka's red light district, another similar locality, or just a fiction?

The narrative of The Suicide of Mr Tanaka integrates the jam theme well by placing a dark twist on the culture of overwork in Japan and the rigors of the corporate workplace. I liked how the mystery gradually unfolds through a series of clippings of text, and the encounter with the informant that creates a palpable sense of dread. I think this is a game with a lot of potential to extend its narrative into a fuller mystery with the unresolved questions and unusual horrors that lurk in the corporation.

As far as feedback, I think some introduction to frame the role of the player's character as a sort of detective could help illustrate their role in the story. The text font can also be a little difficult to read at times. But most of all I think the biggest thing is that this is a story that evinces a great amount of talent and I really hope you continue to explore games within this format in greater depth.

Thanks for submitting The Suicide of Mr Tanaka to the SCREAM LITE jam!

Thank you so much for your feedback, It means a lot to me, really!
I'm really glad you liked the game.