Kinetic is a game made for the 18th ScoreSpace Jam with the them Magnetic it was fun to work with my good friend Retsu.
Submitted by QuickeeJats — 12 hours, 19 minutes before the deadline
Add to collection 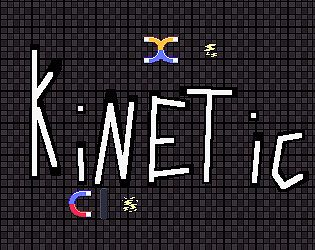 Simple interpretation to the theme which was well applied in the game.

Good job! Game was simple and it works which is always a plus in my book.

1. while playing is the difficulty remaining static throughout my entire playtime. As a result, I had to let myself get hit by the sparks to end the game and stuff.

2. The sound is quite nice. One thing I would suggest is not starting over the music whenever a player is navigating through the UI so they don't have to hear the beginning parts of the music over and over again in rapid succession

3. The arrow indicator that let's me know where a spark was coming from was helpful but I found myself looking in a small area in the middle of your game rather than looking all over your game and seeing whatever cool aesthetics you game has all over the screen

4. the upgrade of the magnet was a really nice touch and the explosion of particles when the magnet dies was great as well!

I had to let myself die, the game should get harder the longer you play ! Also, i was able to survive only by keeping my magnets rotating 😅 (i stopped doing so when i noticed you get more points when the sparks hit the center of your shield, which was a nice touch). Good job !

Thank you for your comment. Honestly I was making a way to make it harder but time on the Jam was low so I scrapped the idea but I feel like remaking this so If I do I'll keep that in mind. Thank you for playing!