A hero returns home at last.
Submitted by Naomi Norbez (call me Bez) (@NaomiNorbez) — 1 day, 17 hours before the deadline
Add to collection 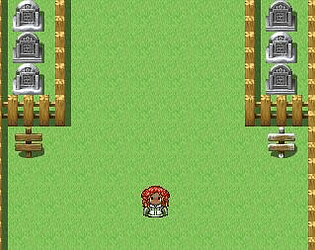 I see it's about a story where a hero returns home..  A lovely map, but I missed some paths between the buildings. People are supposed to walk from one place to another, the gras can't look so untouched. However, I liked the cemetery. The dialogues I found really well written. In the end I became abit disappointed as I was hoping for some kind of challenge. There are answers to choose, not sure what the NPCs had answered to a denial.

edit: What I also wanted to mention.. it would be better to take unneeded files out before offering the game to the public.. as for example all the battlebacks, battler images, etc..(especially all the unneeded audio files) and so make the game file smaller. Especially when it is for download. For me this wasn't a big issue, but I know about some people having really slow internet and they might not even bother with the download if the file is too big.

Thanks for the review!  Yeah, I wanted to take the files out; wasn't sure what that would do to the game, though.  I might go in and remove the files the game doesn't need.  Thanks again!

Updated the game to remove unneeded files; the size has gone down significantly.  Thanks again!

Is there anything to do besides talk to people? Before I submit a review I want to be sure.

Hmm...I don't think that is much of a game. No offense.

How do you mean?

Maybe I missed something" but it just consists of walking around and saying yes to people's questions with an anticlimactic end. There's no win or lose. There is no challenge.

I understand.  It's not supposed to be about a challenge.  That doesn't make it not a game.