A Retro Arcade style 2D sidescrolling beat 'em up!
Submitted by Purpal — 2 days, 14 minutes before the deadline
Add to collection 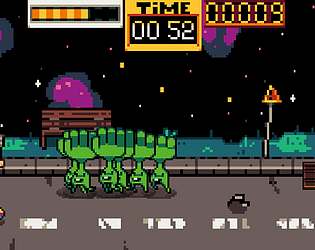 Probably my favorite game in this jam! It's got graphics, it's got sounds 'n' music, it's got gamepad controls, it's even got a bit of depth with the attacking. One thing I'd change is I'd add more monsters, or at least make them look a bit vaired (slightly randomized heads, hands, bodies, etc) because when they were all stacked on top of each other it looked kind of the the Windows XP error. Nonetheless, I really liked it!

Thanks for your feedback! We were also thinking of adding enemies, but we decided against that due to time constraints. :(

We prioritized the score system and the score modifiers rather than content.

If we ever do decide to work on it again, we'll definitely be putting in more enemies. The artist even had two enemies ready, but we couldn't include them in the final game.

Firstly, I really love the background and characters  art, as well as the attacks animations of the player and enemies. Best graphics in this jam imo, definitely see lot of effort went into making them .

Secondly, this game is a pretty good stress reliever, especially after a long day at work

Really the only concern I have is the executable being called "ScoreSpace GameJam" instead of "Bit Smasher", almost thought I downloaded a virus there for a second.

Although I'm curious, how did you get half a developer?

Haha, We're pretty much a team of three, but I invited a friend of mine who's never done a gamejam before to come and experience the development of a game! The person threw an idea or two around, and then unfortunately had to go to work for the weekend.

Thanks for your feedback, we appreciate it. I also personally love beating up the baddies.

Hey! Do you have a keyboard version? So people can rate the game.

Yes, I do! I'll put in a comment saying that there are keyboard controls in addition to controller support.