mmm is a pizzaView game page

(Say it with an italian accent)
Submitted by thomasl — 3 hours, 54 minutes before the deadline
Add to collection 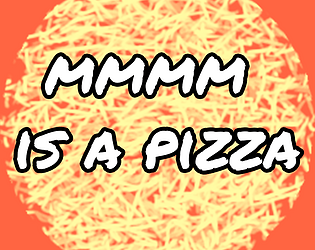 mmm is a pizza's itch.io page

Neat game! I included it in my compilation video series, if you'd like to take a look. :)

Solid entry! I'm a fan of the focus-blur effect on the main menu, it'd be cool if that was somehow implemented as an artistic touch in the main game. The models and aesthetics were nice. The interactivity with certain objects was a little stiff at times, I'd appreciate the ability to reposition objects onto the pizza if you accidentally drop them off the side. The soundtrack is excellent. Overall this game is pretty good, well done!

Great job with the visuals, the opening screen with the falling toppings was fantastic. I think the gameplay was a little on the easy side since only one of each topping was required, perhaps if a specified number of each topping had to be placed that would make the gameplay more intense. Overall though it's a very chill game with a cool soundtrack. Nice!

When I play the game, I can press the "Start" button but it doesn't go away. A receipt appears but other than that I can't interact with anything :/