You need to find a girlfriend, but all the girls think you're a dork. Try to overcome your dorkiness to pick up a girl.
Submitted by Garry Francis — 8 hours, 58 minutes before the deadline
Add to collection 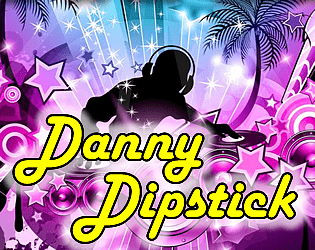 Overview of Game
You need to find a girlfriend, but all the girls think you're a dork. Try to overcome your dorkiness to pick up a girl.

Requirements to Play
This game requires a z-code interpreter. Interpreters for many platforms can be found at the Interactive Fiction Archive http://www.ifarchive.org/indexes/if-archive/infocom/interpreters/

Danny Dipstick is a short game with no higher ambition than to entertain for an hour or so. It certainly meets that goal, but it could have set its sights much higher.

The game faithfully — even doggedly — adheres to the tradition of old parser games, from the file format to the simple mechanics to the choice of verbs to the sparse rooms. This makes my withered curmudgeonly heart sing.

While playing, I would have liked some more flavour, more described items (e.g. the koalas), and important items folded into room descriptions instead of “you see here”. On reflection, though, I think they add to the nostalgia.

There are a few moments of sheer comedic genius: the whole sequence in the bar was my favourite.

The game follows Danny Dipstick, a dork trying to get a girlfriend at a nightclub, but beset by a series of problems.

A thin plot isn’t necessarily a flaw, but I expected twists, new hooks, and character development. I would have liked either more plot, or clarity from the outset that the story would be very light.

The puzzles are, frankly, a bit naff. They’re mostly a series of fetch quests, often with little connection to the problem they solve. The solutions are often unrealistic — sometimes humorously so, sometimes embarrassingly.

I mostly found them very easy and would have liked the difficulty to ramp up near the end, but it’s a good level of difficulty for new players.

I was a little put off by the treatment of class and race in the game. The characters fall into two categories: Those of the same class as the PC, whose race is unspecified, and whom the PC tries to do favours for; and service workers, whose race is usually specified (Indian, Maori), and whose good opinion the PC doesn’t care about. It’s not, like, Birth of a Nation, it just made me a bit uncomfortable.

I also kind of got the impression that the narrative was treating the clerk’s Indian-ness like some sort of personality flaw, which was quite perplexing.

Thanks for the review. I'll have to get you on board as a tester.

Danny Dipstick is only intended as a bit of fun, but most of the issues you raised are quite valid. I was still working on it just hours before the submission cut-off and it looks like I introduced a couple of bugs that weren't in the beta release. Maybe I should do a post-comp release to fix those issues.

I've also been experimenting with a web-based version. It's actually not as straight forward as you may think, especially when hosted on itch.io.

I've been going through your notes and two things have me puzzled:

So, what were you getting at here?

What did you do to think that the same thing had already been said twice immediately beforehand?

Outside High Roller Nightclub
You’re outside the entrance to the High Roller nightclub. This is not just another club. It has a much fancier atmosphere than any club you’ve ever been in. You can enter the club to the south or return to the street to the north.

A bouncer is here, guarding the entrance to the nightclub.

>talk to bouncer
You try to cajole your way in. “I’m sorry sir, I can’t let you in here dressed like that. We have a dress code and it’s my job to keep people like you out of here. Now back off before I bend you in half.”

Hmmm, let’s stop and consider this. He won’t let you in because you’re dressed like an idiot. Maybe you can do something about that.

(Emphasis mine.) As you can see, the same message mentions clothes thrice; a reasonable hint if the player seems to be stuck, but not so much on the second move of the game.

Sounds fine to me.