Who wants to walk anyway?
Submitted by DeepFriedOreo — 7 hours, 7 minutes before the deadline
Add to collection 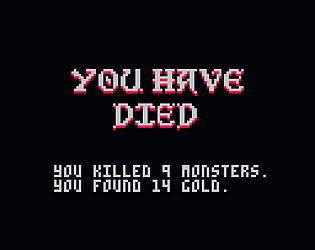 Very cute game, the polish is nice with the music, the cute sprites and the UI that reminded me of playing Final Fantasy in my childhood.

For me the initial screen stays black, until I press X. At first I felt like the only enemies were slime. Maybe the amount of damage can be highlighted in red or something, so that the player doesn’t have to read through all the battle messages.

The start screen has some intro music, pressing x skips the intro trumpets, but if you wait for the trumpets part to end the screen shows up as well! Thank you, I appreciate the comparison. I based the original design off of Dragon Warrior, one of the original Final Fantasy's main competitors, lol.

I actually wanted to add some colored text, and I fought a couple of time to come up with a way to do it without going over Pico-8's token limit, but it just wasn't doable. At the end I was commenting out old code and optimizing things just to make sure I could get the menus and enemies I have. The way I have the text system setup, is I give it a single long string, and I wrote a function that divides that into 5 strings of 25 characters, and if there's any more it add it's to a buffer which loads the next window. I added in a parse check for ! to be a command character, and then I could pick a number to add a color and it would check all numbers until a space so I could get up to the 16 colors. But it was very costly.

The presentation is totally spot on. Love the aesthetics.

I also think the minimal nature of the game works quite well in this case. As others have already mentioned, the beginning is a bit slow, but with a bit more variety (items, abilities, etc.) it could be a really cool "let's see how far I can get this time"-type of game.

I appreciate all the kind words, thank you! I was worried when I started because I am not the best at pixel art. But I normally try to throw games together for week jams, so I had a lot of time to experiment with different things. Yea the idea at first was to have it be you try to see how much gold you get. But I wasn't really able to flesh it out enough to be worth the multiple plays.

originally with the equipment I wanted to do a heirloom system, because the game I based my original concept off of had the main character being a descendant who collects equipment that was passed down. So when you died, you would pick a piece of equipment you're wearing and that once piece gets saved for you next play through. But especially with how simple it is right now, that was a little OP.

Hi, I like this game. As somebody in coments said, it take some time before game starts being fun. That's the only problem, less action at the start. At higher levels it is much better game. The stats system and all rpg elements works well. Also graphics and sounds are fine :) . I hope you plan to do some update in the future...

And also, I found little bug, at the start menu. When I press z first and then x, I have got error message.

Thank you very much, I may update it in the future. My ideal dragon fight was a pure black screen with the dragon and the UI. I was really busy yesterday but I will take a look and give that bug a fix! :) thanks for letting me know. I know exactly what that is and I feel silly I overlooked it.

Well only one or two hits left to kill that mage. After that, i will get my level up. Hmm, I got only 4 HP left. Well that mages usually hits for 3 damage -> ATTACK!

Haha yea, the way the battle works is it calculates a max damage, and then picks a value between the max it could possibly do, and half of that. So they do have the potential to pull some clutch hits. Thank you for the kind words, and for giving it a play!

I loved it, the music and the art are beautiful, but in the beginning is a little repetitive.

Yea I wish I could have gotten a better variety of enemies in there, and there was going to be spells as well but I had to ditch them. Thanks for playing though :) glad you enjoyed it.