Hello all, I haven't been very active around here since I've been worked to the bone at my day job for about the entiiire duration of the jam, but I'd  like to share the process, pains and pleasures of my game- A shade of blue! 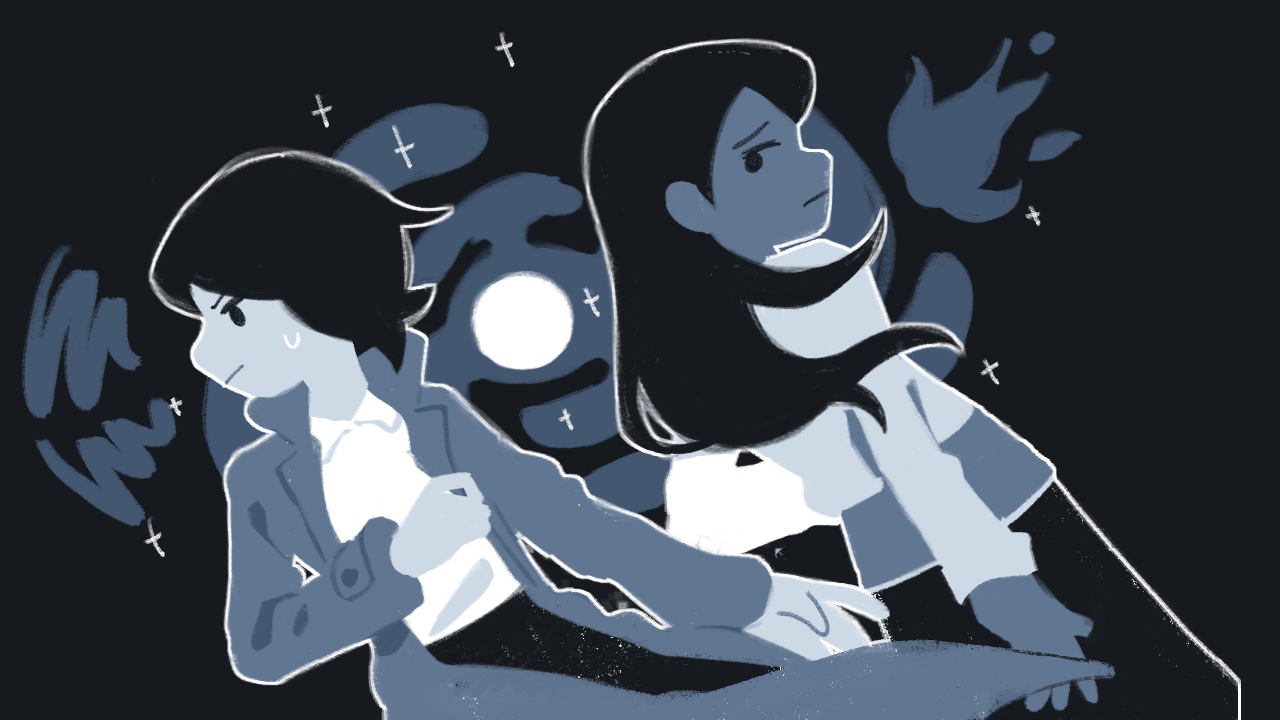 This post will be a retro-devlog and postmortem as I did not have time to log development during the jam period.

To start, I'm Cynthia, a small illustrator and BIG mystery enthusiast. Inspirations include Ace Attorney, 999, Zero Escape, Danganronpa, Ghost Trick, Hotel Dusk, etc. I spent a lot of my formative years on flash game websites playing all sorts of odd point-and-click games as well. So to approach a game with those elements has always been a goal! I'm glad to say that the efforts I made during this game jam (following one I did less than a week before) helped get me just a little closer to that dream!

A shade of blue is a kinetic short story with a few point-and-click elements, in a similar vein to Ace Attorney in that has narrative sections and  investigation sections.

I went into this development with an old story in mind- two detectives, Jasmine and Tanya, are on a stakeout in which Tanya mysteriously ends up in Jasmine's apartment while Jasmine remains asleep at the stakeout site. It's part of a bigger convoluted mystery that I don't even know  where it's going. The 'room escape' element takes place as you play as Tanya and try to escape Jasmine's apartment. There, you discover some things about your partner on the force...
Okay, so 'room escape' is a very generous description. You don't actually escape- rather it's more of an exploration game, which is still pretty generous.

I'll be covering my process in the next post. Thanks for reading!

I gotta say, I'm already vibing with you pretty hard just based on your inspirations. I played all those games back when I had a DS; and PW and Ghost Trick are enduring inspirations for me as well.

Looking forward to seeing more about your process, and I'll be downloading A Shade of Blue shortly. :)

Aah, yeah I think once you get into one of those games, you have to get into all the subsequent similar ones, haha.
Ghost Trick is severely underrepresented in this day and age..! People like us need to keep it in our hearts for the future.

Thanks for visiting, I hope you can find some enjoyment from it! & I'll be checking out Pinkmatch when I'm available... it looks stellar!

I've returned with lots to talk about! To start I have a retroactive devlog AND...

I kept a log of my time spent working on the game for my own curiosity and I think it's also an interesting thing to share -if you're into this kind of dry thing?

Like I mentioned before, the story has existed for quite some time. In fact, it's been sitting and stewing since 2015?! 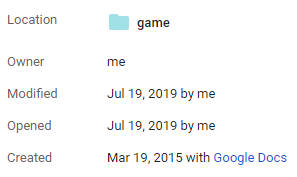 If I didn't have a small self-contained story that I never got around to doing anything with.. well, let's just say development really wouldn't have gone anywhere period. I can't say I'm particularly a strong writer so doing  a VN stressed me out on that front.

So, what's the deal with the spreadsheet, you ask?

As you can see, I've noted time spent, the day duration, overall duration and notes. The notes contain what aspect of the game I worked on, as well as any information I had to research in attempting the point-and-click concept. However, the most compelling thing I get from the spreadsheet isn't all those numbers and text.

That isn't a boast by any means- in fact, I despise that I wasn't able to spend more time on my game. I was scheduled at my day job 7 days in a row, with the first 7 days of the game jam I was slowly deteriorating, away from home while my game sat unrealized until I made movement on the 12th. Anime Expo 2019, huh? Loved to have gone. Why my game is so short, why I stuck with pixel visuals composed of 3 values, why I went and researched an existing vein of point-and-click code and re-purposed it for my limited use was all because I had 3 layers of time constraint on me- the game jam's imposed time limit, my work schedule, and taking care of my human body and brain.

I suppose it was just unfortunate timing for me, but it is what it is.

Regarding the actual game development process... well, it's pretty straightforward I would say?

For the writing, I got the hard part out of the way which was the apartment room 'escape'.

There's 9 interactions in the apartment room. I initially planned to add a multi-tool as a red herring, documents written in Japanese (for some flavor text gleaning random multilingual information about Jasmine), and an alternative means of progressing the story that involved the light switch next to the door. For the sake of linearity, I just stuck with a single path 'puzzle'. Notice the desk drawer is locked, get the small key, find a notebook with a number lock and look for something with four digits. The clock face being the right combo is intended though- it's all part of the expanded story I have sitting and stewing once again.
After that, I wrote the scenes before and after the room escape as I would a typical story.

For the code, I had to do mountains of googling and finagling to find the extremely simple effect I wanted to achieve. I have two sources to thank, Potato Art and Genre-Confused Room Escape.

I played each game and felt an instant connection with the simplicity, especially of the latter. After googling and reading the same renpy 'Screens and Screen Language' documentation 500 times, I finally got the code into my skull and fussed with it until I got something I liked.  Getting the thing to work was, quite literally, the most exhilarating moment I've felt in months (BESIDES watching Detective Pikachu). 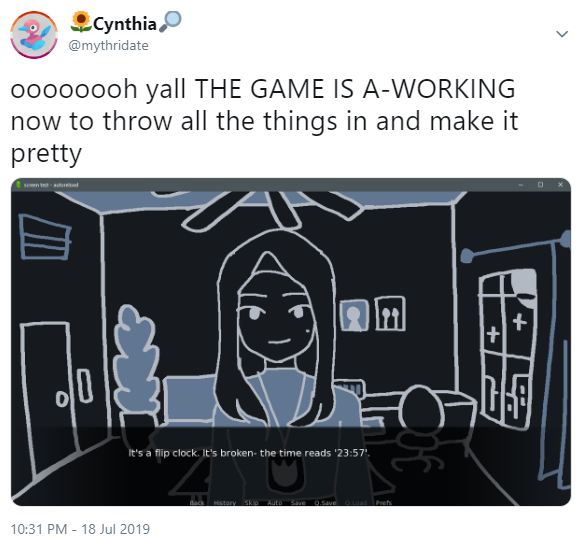 It's thrilling to enjoy the fruits of your labor after wondering if you should have tried googling this thing instead of that thing to get the ball rolling faster. Ah, regardless the product is the same- great!

I'll be posting a final chunk of text talking about the game in it's finality later. Thanks for reading.