A dog stealth game where you have to infiltrate the garden of Moritz to find the legendary Squeaky toy.
Submitted by Snuti (@SnutiHQ) — 2 days, 12 hours before the deadline
Add to collection 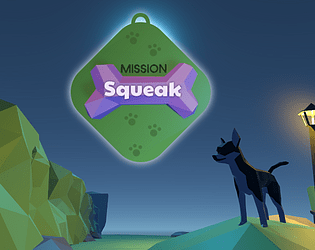 This was a lot of fun! Like some of the commenters on the game page, I was frustrated at times by the tight perspective, but I don't feel like that's a weakness so much as another mechanic to learn. Since the LoS of the guard dogs is so clearly laid out, I never felt like I couldn't get enough information about what was going on or needed a peek mechanic. That said, I did notice some behavior around bones that may have been unintentional--Once I dropped a bone well away from where I wanted to go, and when the guard reached the bone its LoS extended much farther than it would have normally (I think) and caught me!

Thank you so much for the feedback. Really happy to hear you liked the game 😊 Thanks for the report of the bug too, we shall have to look into that. 😁

Really nice work, how did you make that intro an infinite walk? I waited for ages to see if it would stop :D

Thank you so much!! 😁 We made the infinite cutscene walk by creating a circular world which rotates slowly, and the character/camera is standing still. You can see how we did in our video here (at 6:45):