The Legend Of Zelda : A Link Between The ScreensView game page

NDS Based
Submitted by Luvaity
Add to collection 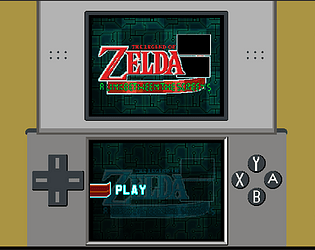 The Legend Of Zelda : A Link Between The Screens's itch.io page

Franchise
The Legend Of Zelda (DS)

Bruh, I walked off the edge by accident and now I am stuck in the void lol

Ye, I wished we were able to add walls at the end...

I don't know what else to do other than hit the bugs but damn it looks very pretty.

Thanks... I guess we should make the game clearer of what you should do.

But in the meantime you CAN do the light puzzle.

The Legend Of Zelda : A Link Between The Screens

First Impression: How Those this game even works?! Ok I got a hang of controls but I have no idea why there is 2 screens, The styles look good, also the gameplay is smoother than my game! Well, I have no idea what to do, why the spider run away, and why I transferred to a next level without figuring out the that light things, and many other things. I got stuck so I closed the app let’s test it again, shall we? Ok this is second tried I still didn’t figure out the lamp thing I had this idea that you have to use spider to make a reflection?! So, you could solve the puzzle and opened the door. Man, I should play one Zelda game in my life before attempting this. The camera breaks sometimes, also spider won’t show up in the easier screen I don’t even know if it’s intended or not, but I stuck at the second level.my eyes started to hurt. Hooray I accidentally find out A controls the reflection of those thing. Finally opened the second door, thanks to the being immune to dying. Ok I jump off from a place to reach to level 3 but it shows black screen maybe show go the other way. Third Play: Man, I’m speed running this but sadly the other door had a white collider preventing me from entering so I guess this is how the game ends at the level 2.

+ Weird Idea to use two screens

Overall: not going to lie I’m checking YT to see what is a DS console so I can review this by that standard, ok I find out why I never heard of DS console in my life, but back to review, I really didn’t enjoy the first-person experience, and I’m not going to tell something about the bugs because I was expecting some but disabling the health (or health bug idk) was great, it helps me finish the game, kind of? The models and style were good. Solid 7-8, I think.

Thanks, the game's quite buggy rn, but we plan to expand the game in the future to fix the bugs and add more... stuff... to do, because it is currently more like a tech demo. But ye, the dual screens were made to emulate the Nintendo DS. Glad you enjoy some aspects of it despite the flaws.

Hello, thanks for being sincere at your critic, i really appreciated that, All of the game it's made in the jam period, and i didn't make nothing on Sunday because of real life problems, but i think it did go pretty well for my first jam, the music it's made by Canine Lotus(my brother), if you like his content, you can check his youtube channel, just search "Canine Lotus" on YT, and you will find a lot of music, and some unused music made for this jam.

So happy to have worked on this game.

Your 3D models are very good though, you were very helpful!

I wish more games on the DS had done the 3rd + 1st person camera, that is such an interesting idea.

Thanks! I was the one who came up with the idea to combine the 1st + 3rd person camera thing.

It happened because we were split between using the first person perspective or 3rd.

I like the concept you took with both screens. Nice Job!

Thanks. I was worried it was gonna turn out as a starfox zero, but I guess not, so that's nice.