One By One: A Single Pixel AdventureView game page

A text adventure with only one pixel.
Submitted by North of Earth (@northofearth) — 1 day, 12 hours before the deadline
Add to collection 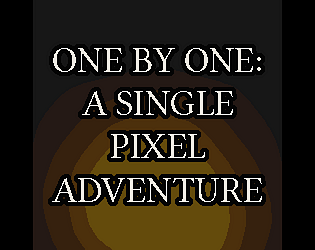 One By One: A Single Pixel Adventure's itch.io page

Lovely concept! I included it in my LOWREZJAM compilation video series, if you’d like to take a look. :)

Oh boy, this, now this was an experience. I myself have wanted to make an entirely sound based game for some time now, but you guys went out of your way to still add some minimal visuals (to indicate motion or shining objects).

It might not win anything here but I honestly hope you'll keep developing projects like this in the near future, as it is a genre just waiting to be explored.

Overall great idea, just this might not have been the jam meant for it. Again I can only beg you at this point to see what else you can do with these mechanics in the future

I loved the idea. The one pixel really helps to visualise the story and says so many things already. It is very interesting how this nice setup can inflame the imagination.
Very well done.

I thought this was a really interesting concept - reminded me of the "audio" games on iOS. Feels like it needs more cues or to be simplified - not being able to see the text you type makes it confusing, particularly with more complex commands. It's also not clear what the audio refers to. I struggles to get out of the first room, even following the walkthrough. Really good idea and I'd like to see(?) more of these sorts of games!