Travel Herbania, collect monsters, and fulfill your Destiny
Submitted by Will Cuculis — 19 minutes, 33 seconds before the deadline
Add to collection 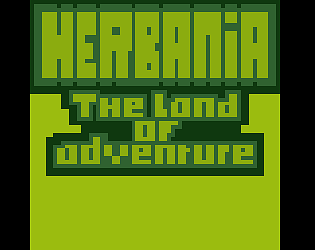 This is a decent game, I'm surprised not many people have rated it yet. If you get a chance give mine a try. Warning: it's weird. https://itch.io/jam/lowrezjam-2018/rate/293545

LikeReply
Will CuculisDeveloper2 years ago

A couple things for anyone who wants to play it, given that I had no time to implement a tutorial:

1. WASD to move in the overworld (as well as in menus)

4. F is to switch creatures during battle

5. When you use a potion on a wounded team member, it is automatically applied to the creature in the top position. You'll have to switch positions if you want to heal another creature, which you can do in the menu

So far it's  a really nice entry, and it's nice to see it has some jokes on it. Correct me if I'm wrong- I was struck by a lightning and to shorten the sentence, I'm the chosen one, does this make me Zeus? I haven't played till the end yet, but I'm curious XD. BTW I'm giving this a high rate. Well done

PS: If you have the time play me entry, it's nothing compared to yours, but I hope you enjoyed it a little bit. https://itch.io/jam/lowrezjam-2018/rate/293637

LikeReply
Will CuculisDeveloper2 years ago(+1)

Thanks! I’ll definitely give yours a go! I’m going to try to finish it completely and add a more solid story after I give my mind a rest for a while :)