A first person shooter game for the LibGDX Jam 15 December 2020.
Submitted by PilzHere — 15 minutes, 24 seconds before the deadline
Add to collection 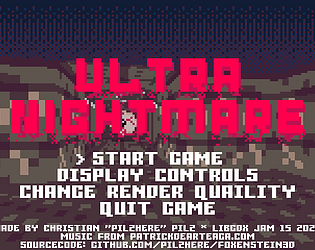 Great! Nice revisit. As initial version was difficult to enjoy the last linux one is a real immersion success, you fixed everything! This game  is amazing for a one week effort!  So far I am still not sure that  the end is  gathering the 4th yellow key/badge,maybe I should go through all the wall pressing E to find a secret path like in the good old time game??? Thanks for the excellent experience and do not hesitate to build a bigger world and to add a bit of storytelling around, I can definitely play more of this game...

I will keep working on the game because I really enjoyed making it, and I can see so many fun things I can do with this game.

I'm currently enjoying some time away from the keyboard. =)

Old Skool . The classic 3d look is beautiful. Mouse sensitivity was extremely high but I lowered it and still got to enjoy the game. :)

Thaank you for the Doom throwback :D interesting take on the sleep theme. I don't like the side effects of whatever you do to hide cursor. People know how to hide their own cursors, you don't gotta disable it. And I agree mouse sensitivity is through the roof I could barely play.

Bringing OG Duke Nukem back to the land of the living, Ultra Nightmare throws you right in to the pits of hell reminiscent of that old windows screen saver with floating monsters to kill.

The game is missing a mouse sensitivity adjuster (thankfully my mouse has that on the fly), which, without, makes aiming feel like you're trying to go for 360noscopeheadshots. It could also go for some form of hit marker when you shoot a mob (maybe lower how long the muzzle flash is displayed as well). Sound effects wouldn't hurt, but the music makes up for the lack of them.

Otherwise, it plays fairly well, and has enough mobs in areas to make it challenging, but due to their slow rate of fire and slow projectiles, easy enough to get through without breezing through it.  I guess it could be considered a gamers nightmare (or maybe really just a regular dream), but doesn't lend itself too much to the jam topic.