Submitted by Longer — 1 hour, 49 minutes before the deadline
Add to collection 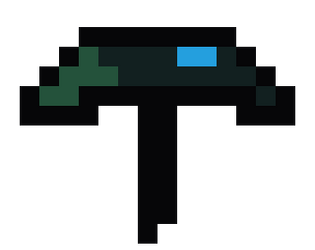 Which theme was used for the game, and in what way?
Alien, player kill aliens

This was a fun tower defense game. Balancing when to gather resources vs fighting alongside your turrets made this intense in later waves. I made it all the way to wave 40! Though I do have a few gripes, such as bullets being a pain to craft and since the game pauses it doesn't make sense to craft 1 bullet for every 0.1 rock. It should have just been 10 bullets for every rock. I also felt that iron was the hardest resource to come by, since it spawned rarely and can drop 1-3 pieces. It might of felt better if dropping 1 ore was a rarity and 2 was the common since you get much more rocks than iron. Otherwise, its a pretty solid tower defense. I'm not sure if there was a point to win, but I had a good run (died trying to bite the bullet and clear all my resources since I couldn't mine it all up with being busy helping my turrets near the end). Great job!

wow, you make me smile for hour <3

thanks a lot and glad to hear that

I like the combination of mining ore and tower defense.

glad to hear that

A very chill game.
I didn't find out about scrolling down to the bullets until late into the game haha - might be good to put those at the top of the list ;)

yee thanks a good idea ;)

Nicely done! The music is nice and relaxing.

Many Thanks, my friend did it for me <3