Make your kingom the most famous in ancient Ireland.
Submitted by JackOatley (@f_oatley), jamesydownie (@JamesyDownie) — 11 hours, 23 minutes before the deadline
Add to collection 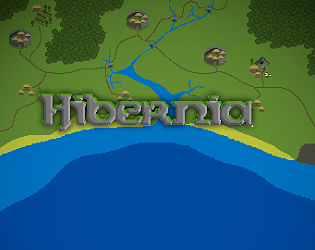 Wicked!  Reminds me a lot of Civ, or Crusader Kings.  Really thinks of crafting on more of a zoomed out level, digging more into acquiring resources and managing where they are at one time.  Very fleshed out mechanically for a two week jam.

I think the controls can be tightened up a bit, like dragging a line from one node to another instead of left/right clicking, and maybe dragging the mouse across the ground to pan would be neat too.  But the game itself works great and the enemy nations seem fully autonomous.  Well done!

Thanks. And yeah, it's a culmination of a couple ideas I've had for a while, so I knew mostly what and how I wanted to make it. For example, I knew the map would be big, so I have it, and things on it, generated from bitmaps. I did the same thing in my other game "Minoan" which is very similar.

Both great ideas, I'll implement them when I get round to updating it. Yeah, the AI is actually rather basic, but it works in the context of gaining score through trade (because it tends to take random, usually longer, routes), and it has some random elements to the point where the first few decisions it makes can define its behavior for the rest of the game.

really good game but can you add a conquest mode

Like, take out the timer? I hope to be doing that eventually, the idea changed a fair bit during development to meet the time constraint. Lots of things were originally meant to be different, and there was meant to be a Viking faction that raids from the sea and can only hold certain coastal regions.

I think you should term the jam game in to a official game. Because it's really fun.

Come check out our entry: