A rescue mission set on an uncharted world.
Submitted by Brain Jar — 2 days, 9 hours before the deadline
Add to collection 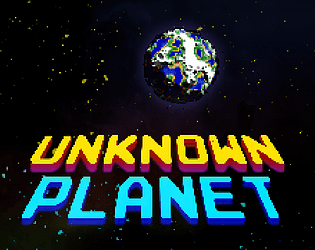 Rating the game using the judge categories just for fun

Tight controls. The shooting recharge mechanic was interesting, but I often felt like I had no bullets at crucial times. I know I could have upgraded but... I went for HP first. I kept getting damaged because of how the lighting was set up. I imagine the idea was for the player to shoot to illuminate dark areas, but honestly it just felt like a hassle. That, coupled with the fact that there didn't seem to be any checkpoints in the 30 minutes I spent with the game, put the frustration factor rather high

Overall, it was fun, but the mechanics kind of stepped into each other

Neat pixel graphics. Everything is well defined (when you can see it). The spaceship in the beginning looked a little weird

Music is great and fits the atmosphere. Story is simple but effective. Sound effects get the job done satisfactorily

As I said before, I felt really frustrated really fast. The game is too unforgiving with death, and the lighting makes exploring the caves more troublesome than it needs to be. I got to say though. I was ready to give up twice but the fact that I could upgrade my stuff and try again stronger made me try again. Sadly, that only lasted so much

With a good rebalance of the lighting, addition of proper checkpoints and general polish, this could be a very good commercial game, although it still lacks a primary core mechanic to distinguish it from many other games in the genre

Seems like a pretty interesting game. Heavy Metroid influences can be seen, and I'm a fan of the unique lighting mechanic of using gunfire to illuminate the level. Good work.

This was so much fun to play!! Great game! would love to see it expanded :D