Take control of a floaty animal and bounce your way to the finish line! Race your friends in two exciting game modes!
Submitted by FloatyAnimals — 11 hours, 53 minutes before the deadline
Add to collection 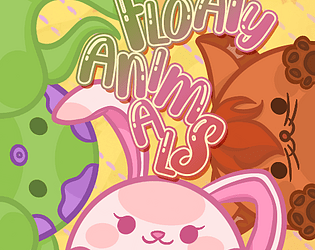 Wow! There is a lot that I found impressive. So many different characters was awesome, different levels was awesome, and the easy yet difficult one button mechanic was pretty well done! Not to mention the AI works pretty well! I love the art and audio as well and think they mixed very well together!

I played a couple games where I started on the bottom and got hit out right away, which from my perspective makes me wish there was a "pause" or "restart" function!

Good fun :) I hope I can play it someday with the actual pump!

Hey there SterfMaGerf! We're super happy you enjoyed playing our game, thank you so much for your kind feedback~ We'll be sure to keep your feedback regarding the pause and restarts in mind for future versions of our game~

Adorable round creatures and graphic. A game that has focused on positive empowering which fit si t perfectly. I had fun playing it with friends, and I can imagine this fitting for children as well. The levels can have been more varied, since the characters were so detailed, and also an option to choose what character that you can play as players might get certain favorites. A game that can be played over and over by all ages and leave you with a cute feeling. Good job!

Thank you so much Pontus! We're glad you like the game and we'll keep your feedback in mind for future versions of it~

Cute! I appreciate that you went all-out on visual aspect of the game and really doubled-down on selling the theme of "cute". If you're gonna do it - don't half-ass it, right?

I had some trouble both navigating menues and picking characters. It wasn't really clear to me when, and what, input was expected from me to proceed, especially in the "character select"-screen. In races I really didn't fare any better, It was hard for me to keep track on what character was mine to control when playing with several bots, and when I failed I had no choice but to sit through an entire race just watching the bots play. Do you think that maybe this game could benefit from having knocked-out players respawn back in, but with some kind of disadvantage?

I think that this idea of a competetive flappy-birds like game has potential. The visuals are already there, and I appreciate the fact that you've already designed different themed stages. If you could pour the same kind of eye for detail into your gameplay and maneuverability in menus then this could definitively turn into a great party game.

Great work, keep it up!

Thank you so much for your feedback Joakim! We're gonna keep your input in mind for sure for potential future versions of the game!

There is a tool tip explaining how to add a character to the game but it's very easy to miss, it took me a while to notice it. If you get ahead in the game it's hard to fall back behind and it's hard to win once you are behind. One of the levels had an obstacle that just killed you which wasn't fun because I died early and was forced to wait since there is no respawn. It's easy to fly off the screen which makes it a bit confusing. The clouds being obstacles are a little annoying, The game is very simple and gets boring quickly but the art is adorable!

Hey Sloody, thank you so much for your feedback, it helps us a lot in order to improve! We will keep your concerns in mind for future versions of the game~

I really really love the art. Very cute and adorable. Game was kind of fun too.

A few things to say though. First of all, it took me way too long to realize you had to press E or P to choose a character. Also I played this with another person and if one got ahead, the other had no chances of winning afterwards. You were basically stuck behind. The camera is also a bit weird, you fly above it and you don't see where you are, or your character gets out of the camera and you cannot see where you are going.

Thank you so much for your feedback Riaasu! We will keep this in mind for future versions of the game~

nice! Thanks for your feedback~

At the start, there are buttons to click and some instructions on how to play. It wasn't clear that you actually have to press one of the buttons to bring your character into being. Everything else was a click, but that was a button press. Once I figured it out, it was fine, but why would I have to figure it out? Why wasn't my character on the screen from the outset?

When the game started, I didn't notice that the P button did anything, it was only the E button that had an effect. Was I missing something?

If multiple local players want to play the game, one of them can play with E and one with P, there is a small tooltip for this in the character lobby.  Thank you for your feedback, we will consider that the current system may be unclear for the future!

Could the game be uploaded for windows as a .zip file instead? I don't want to install WinRar.

As a good rule of thumb; don't use more than three fonts in your game. A bit too simple to be engaging, perhaps aimed a very young audience - 3-4 year olds? The level should probably end when only bots remain - it's not much fun watching the game play itself. Some of the level art is a bit confusing; like thorny branches that do no damage. I appreciate the uplifting tone of this game, it was nice to play something cheerful.

Thank you so much for your feedback! Yes, spread the positivity~