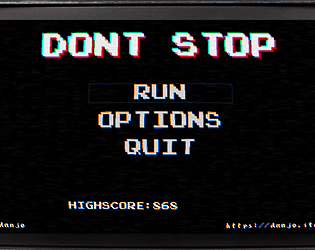 @Jupiter Hadley: Thank you for your kind words! This is my second game and the first time I see one of my games on youtube! Feels kinda weird and cool at the same time! :)

Really neat looking game! I included it in my compilation video series of all of the Godot Jam games, if you'd like to check it out :)

However, I've narrowed the issue down to the CRT shader. Disabling that makes the game work. It' odd, though, I've never had problems with shaders before (in Godot or anywhere else), and it displays fine in the editor. Anyway, I was able to play the game now... You should probably have dropped that countdown, it just adds to the frustration of a game over having to wait so long before you can try again, with such a difficult game. I'd probably had the patience to try a little harder if it wasn't for that :P

I tested with Debian testing and Windows 10 on 2 different, cheap (AMD/Intel Dual Core, GPU on board) Lenovo laptops.

Do you get any errors when running directly in the editor (source)?

Pressing space it *sounds* like I've started the game, but all I see is a noisy line near the bottom of the screen.

It doesn't seem to work...? I only get a black screen + audio, with both the (Windows) binary and the source (with Godot 2.1)

I probably should have mentioned that earlier

You need Godot 2.1, either build it yourself or download from fixnum.org