A short and fun platformer!
Submitted by TwistedTwigleg (@TwistedTwigleg) — 3 days, 15 hours before the deadline
Add to collection 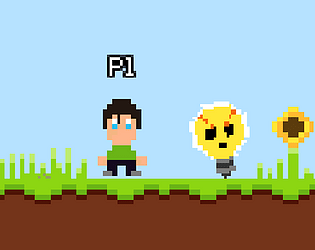 Great platformer, the difficulty ramps up very nicely, like the use of the spawner blocks and timed platforms in particular. Amazing that you added multiple characters with specials and co-op in 2MB, great job! Feel bad killing those poor bread enemies though :(

Don’t worry too much about the bread enemies, they’re toast anyway! 😆

I’m sorry, dumb joke. The bread/toast enemies are based on the enemies from BattleBlock Theater by The Behemoth. Originally they were going to come out of a toaster, but I decided to make a generic enemy spawner instead, so the toaster idea was scrapped.

I think the reason Godot complains about the audio is because I removed the background music in the source code download because of the licensing. (I don’t know if I could include it or not)