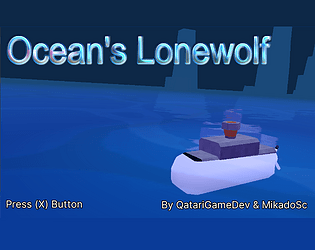 Game Description
A third-person shooter take place under the ocean.

How does your game tie into the theme?
The action takes place in the ocean.

I love the graphics here. The submarine just feels good to pilot because it's kind of cute, almost.

I did have some trouble figuring out what to do. I didn't figure out where I was supposed to go in level 1 the first time I beat it, although I figured it out the second time. I also didn't realize for a while that the enemies have more than 1 hitpoint--I thought they kept shooting me very effectively, but it turned out I just kept hurting myself due to explosions.

I'm not quite sure how to beat the boss--I gave it a couple tries but it seems like it would always kill me by the time I could shoot around 15 bullets.

I think the variety in levels is really good. Level 1 is all about combat, but is easier to do when skipping all the enemies. Either way, it's about combat or speed. By contrast, level 2 is all about precise movement. And of course level 3 is the boss.

I do actually think that restarting the whole game works alright here. I don't love it for the boss section, as it means it takes a long time to get to the boss. But for the first two levels it worked pretty well, as it meant I had to try two times to figure out level 1, and I had to try again after I lost to the boss, at which point I could figure out level 1 even better.

So overall, a nice little game. 😄

The final boss can't be more "in your face" than that.

Congrats to the team.

Thank you so much^^