Fight your way through the robot dungeons!
Submitted by npinsker (@npinsker) — 4 hours, 45 minutes before the deadline
Add to collection 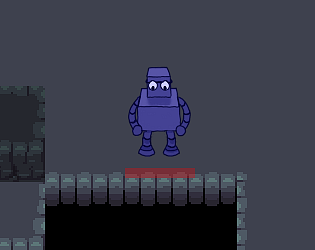 How does your submission match the theme?
Almost everything in the game is designed to work in multiple ways. Some examples:

- Shooting bullets slows you down, giving you more control over movement.

- Shooting is used to both deal damage and to push bombs around the play field.

- Powerups can either be used as weapon modifiers or as bombs.

- Bombs clear bullets that they hit from the play field.

- The fire powerup is short-ranged but deals more damage.

- The lightning powerup is short-ranged and can hit through pillars, but you cannot detonate bombs.

- The metal powerup knocks you back and can knock you over impassable terrain.

- The lightning bomb attack has a larger splash radius but deals low damage and paralyzes enemies it hits.

- The metal bomb attack destroys pillars that it hits, eliminating the player's cover but giving them a health pack.

- Players score points for extra time but also for damaging enemies and clearing bullets with bombs.

Everything else (sprites, music, code) was from scratch during the jam.

Nice robot graphics! I included it in my Game Maker Toolkit’s Game Jam compilation video series, if you’d like to take a look. :)

I like the mechanic. I didn't know about the additional uses of the abilities when I played, or the fact that the bombs were different. The game is a little clunky but the mechanic is solid and I enjoyed the game.